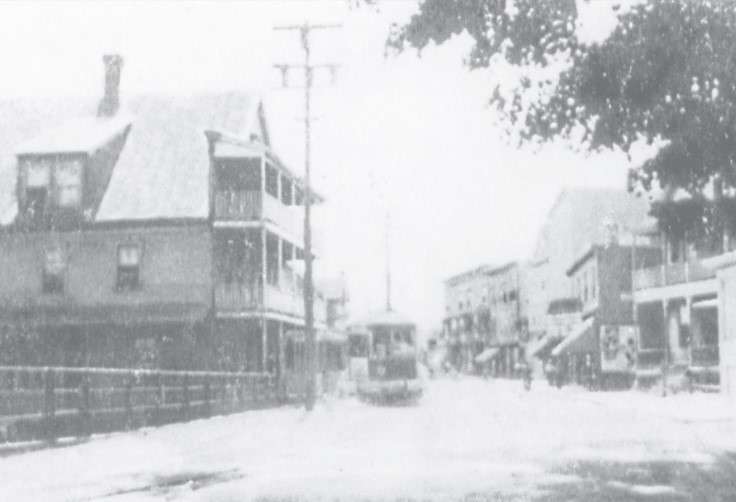 The Plains, circa 1930, with one of the three- story apartment houses that lined the west bank of the Kennebec River, on the left. (photo courtesy of Roland D. Hallee)

Before we go into the era of growing up on The Plains, in Waterville, maybe we should take a tour of the area in our “way back machine”. This will take a little time, so plan on a couple of weeks.

Let’s start at the northern end of the south end, if that makes sense?

If we start along the river, there is the massive complex of the Lockwood-Dutchess Textile Mill, commonly called the cotton mill. It consisted of three large buildings, one on top of the hill was three stories, and the larger one at the bottom of the hill, five stories. In between, stood a smaller one story building, all three constructed of brick. The mill went “nonprofit” in the early 1950s. My grandfather worked there until his retirement in 1952. My grandmother also worked there for a short period before she married my grandfather, a story for later.

Across the street, was a building that contained the Pine View Furniture Store, and the famous “round house” behind it.

Proceeding on the west side of the street, next was a parking lot with a large barn. From what I recollect, the barn was used for storage, although I never did see the inside. The barn was eventually razed to make way for the new “Kentucky Fried Chicken” store.

Next, was an up-and-down duplex, and four unit tenement building, both owned by the Busque family. Alongside that was another apartment building, with many garages that spanned from Water St. to Green St.

Rodrigue’s Market was next in line, where you could buy everything from cigarettes to meat. The market had upstairs apartments. Ma Roy’s Tavern stood next door. (One thing I remember well is that her son was named Roy Roy.) I can still remember going there with my dad, enjoying an orange soda while he indulged in a “beverage”.

A three story apartment building was next, although it sat back aways from the street, followed by Pete’s Market, another mom and pop-style store. Why it was called Pete’s I don’t know. The owner’s name was not Pete. It was Bob Coté.

Some more houses were next, with another small market before a three story multi-unit tenement, before ascending on the world-reknowned, Chez Parée, a very popular watering hole on the weekends with live music. On the corner, where there is a parking lot now, was Leighteau’s Market.

Cross Sherwin Street, and there stood Dot’s Market. Can you believe, back then, within a 150 – 200 yard span there were five markets? Not to mention a sixth on top of Sherwin Hill, named Veilleux’s Market. Ah, but we’re not done yet.

Next to Dot’s Market was Red Star Laundry, now a parking lot near Scotty’s, which was earlier known as Dot’s. Scotty’s Pizza began its run across the street from Dot’s in the 1960s, in a building that was so small, it could not accommodate more than two customers at once. Otherwise, you had -to go outside. Across Redington St., was the Redington Street School, now the Forrest J. Pare VFW.

On the east side of the street, almost diagnolly across from Scotty’s, stood the home of Edgar and Yvonne Poulin, Edgar being a well-known radio celebrity in Waterville (WTVL), whose Sunday radio program was called La Melodie Francais, and maternal grandparents to The Town Line’s business manager, Claire Breton. Edgar would play French music from Canada, to which my grandfather would dance while sitting in his chair.

Let’s go back across the street, to the west side. Not far from the Redington St. School, was, you guessed it, another market. I don’t recall the name of that one. Then, a few more houses before we hit the part where the Maine State Theater stood, and Daviau’s Drug Store on the corner of Gray St. It was the forerunner of LaVerdiere’s Drug Stores, and pretty much carried everything you will find in a CVS or Walgreen’s today.

Then, there were more houses and apartments to the corner of Gold St. Most of these dwellings are now gone.

So, we’ve traveled a ways this week along the northern stretch of The Plains. The Gold Street area is about the halfway point.

This part of Waterville, one of the oldest settled areas, was mostly occupied by the Franco-American community. People who immigrated from Canada to work in the mills, in search of a better life. As you can tell so far, and will learn more next week, this section of Waterville was pretty much self-sufficient. In those days, there was no need to venture “downtown”, unless you were going to a clothing store. Pretty much all you needed was right there on The Plains.

And, besides, not many had cars back then.