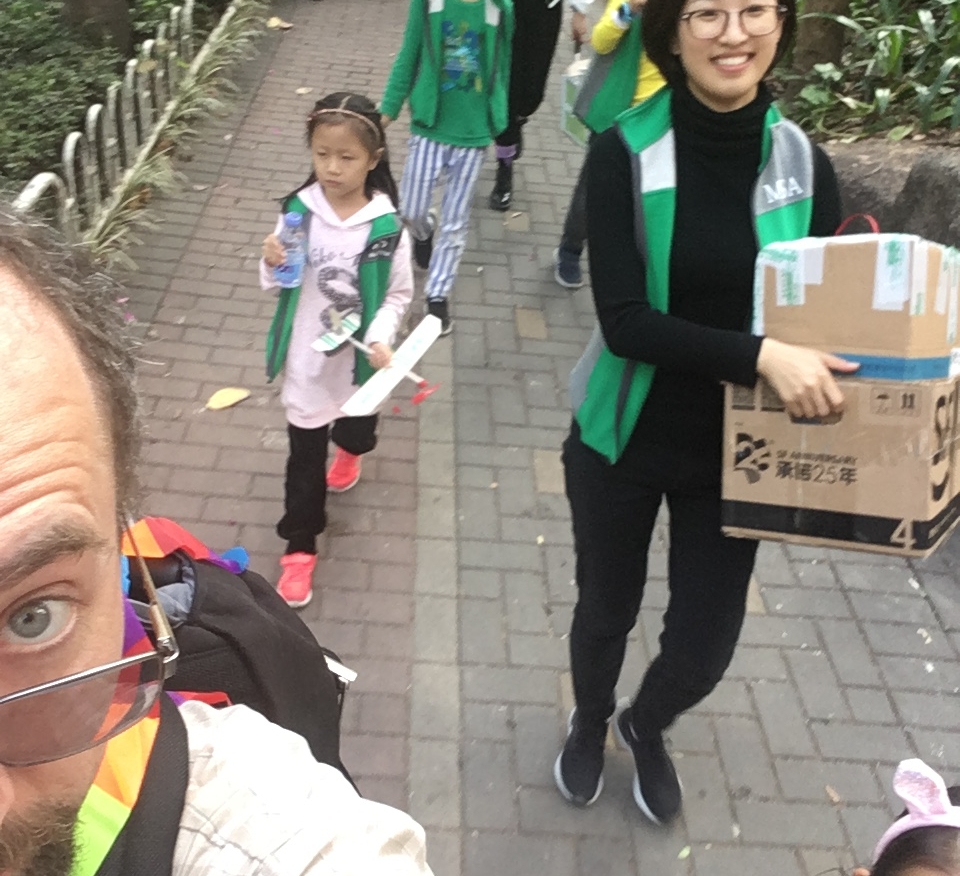 China, Maine’s Ron Maxwell, left, taking a selfie while on a field trip in China. (Photo courtesy of Ron Maxwell)

I had never properly left the United States until this last summer. I did go to Tijuana in high school and honeymooned in New Brunswick, but as neither of them was off the continent and both were brief visits to places less than an hour or two into their respective countries, I never really counted either of them. I have, however, taught middle school in rural Maine for 20 years so I am not a stranger to danger and intrigue.

When I tell people I teach at China Middle School, they always ask if the trip back here took a long time. I tell them it is an easy commute to Maine and we both laugh a little at how clever we are. But in all the years of pretending to teach in China, I never once thought I would get there. Until Bernie.

I hope there is a Bernie in your life. Someone whose good nature is never forced. Someone who genuinely is interested in the answer to his/her question, “How are you?” Someone who knows that s/he has an opportunity for you that would do you good and at which you would be good and doesn’t listen when you make silly excuses to say no. 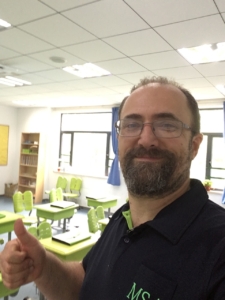 Ron Maxwell in his classroom in Shanghai, China. (photo courtesy of Ron Maxwell)

Bernie was right about everything. Teaching in mainland China was an exciting adventure in a land truly foreign to me on many levels. One that challenged my craft in unforeseen ways and rewarded me in ways I cannot explain. I am going to share with you three things I brought away from my latest adventure, teaching in China.

1) Teaching in China was familiar and challenging to my understanding of the craft of teaching. I worried about how well it would go and prepared for months beforehand, but in the moment I stood in front of the class in China I realized that children are children wherever you find them. I realized that, for all the worry that they would be an unknown, I was looking at the same general personality types that I had seen for years in the States and that it was going to be all right.  My ideas, techniques, and mannerisms that worked to motivate and inspire my Maine students worked in China.

The challenge came in that I no longer had my greatest tool, the command of the native language of my students. Now, I consider a common language with my students a teacher’s greatest and most “taken-for-granted” tool. I never realized how important it was until it was not there for me to fall back on. All the clever banter I thought I had was useless. All the Disney references I cultivated over the years were not there (except for “just keep swimming,” which worked). My students in China distilled my technique for me, forcing me to speak directly and obviously and to draw or show whenever possible. Being forced to do those things that are good teaching is making me a better teacher. 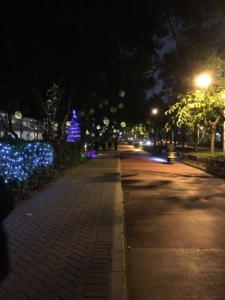 A street in Shenzhen, China. (photo courtesy of Ron Maxwell)

2) Being immersed in a foreign culture is a good experience.  When I wanted to buy sugar at the local store the clerk looked at me and bruskly said, “No English,” while walking away. So, I went back to the WiFi of my room and looked up sugar in my dictionary, played the word several times, wrote it down and went back to the store. I showed the writing to the same clerk and made an attempt at saying sugar. The effect was magical as the disinterested man of before disappeared to be replaced by someone who was so pleased by my attempt to be understood that he took me to a bag of crystals I had walked by earlier. He did laugh at my pronunciation and corrected it for me, but it started a working relationship that I came to consider a “home” in this world I did not know. Every day I tried a new phrase or word, and every day he would patiently correct while smiling. I won’t claim proficiency, but now I can manage a couple of phrases that sound vaguely correct, though I do still get corrected with a smile some of the time.

I never felt lonely, because the many teachers I worked with in China formed a group that did things together and had adventures during the off hours in a camaraderie that was another “home” in China. The wandering together led to wandering alone and I found myself walking and smiling and buying things while speaking terrible Chinese and enjoying learning everything. Giving something to someone else in China can be done as a polite gesture by using both hands. Walking in the wrong lane, the bike lane, for example, leads to being honked at by scooters. Not the brash cussing out that I heard from car horns in the States, but a gentle tap or two that reminded me of where I should not be. Being forced to learn a new culture is making me more appreciative of the similarities between our cultures and more at ease in learning a new one. 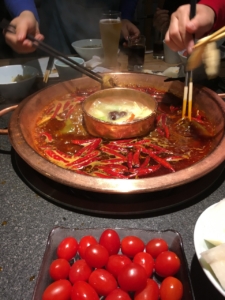 Dinner is being served for Ron Maxwell during his teaching stint in China. (photo courtesy of Ron Maxwell)

3) The challenge of navigating a foreign culture places you at the mercy of strangers, which teaches humility and patience. Teaching in the same school for 20 years leaves one with a sense of security that can lead to pride. Everything is predictable and known. Procedures are simple because of practice. When I sat at breakfast on my first day in China I was completely captivated. Everything was new and I understood none of it. On the left of the room were steam tables filled with magical smells of exotic food. On the right were tables where people sat in various and unfathomable groupings. The language that flowed musically in my ears meant nothing to me: I had looked and thought about Chinese but I knew next to nothing. All my ears heard was the magic of tones which combined to make breakfast music. But to get there I had needed a kind greeter who took my breakfast card and pointed me toward a stack of plates and chopsticks with an open hand wave, a small head bow, and a smile.

Being helped reminds one, both of what one doesn’t know and what a blessing it is to be shown the right way to do things. It wasn’t until I was balancing plates that I realized there were no empty tables. The challenge became that I had to find a seat with complete strangers. Imagine my joy when none of those who I joined moved or forbade my sitting. I was greeted with smiles and nods of welcome. That reception was not unique. I cannot recount the number of times a kind stranger assisted me while I was overseas. In many different places, I humbly accepted help in day to day life from complete strangers. Humility is a difficult lesson to learn, and it took time and repeated exposures.

The second part of the lesson came on return to the States where I was at home. I started to see the same lesson from the other side and was able to assist others. It is very easy to be proud and demand, both when you are at home and when you are a visitor. Seeing this interaction from both sides has made me better. Seeing it at middle age brings thoughts of how young and old interact and can look after each other.

I have now gone to China twice in a calendar year, with the first being to Shanghai during last summer break and the most recent to Shenzhen during Christmas break. I enjoyed both experiences in more ways than I can recount. I did come home willingly both times, but I am still new to travel and 20-plus years of marriage has me rootbound in Maine.  I will go back every summer session the MAST Stem Academy will have me because the experience is worth it for my own growth and for the joy that each trip brings. If you are a science teacher and need a new challenge to your ability and notions and complacency, I can suggest a place in China you can grow. I will be your Bernie.