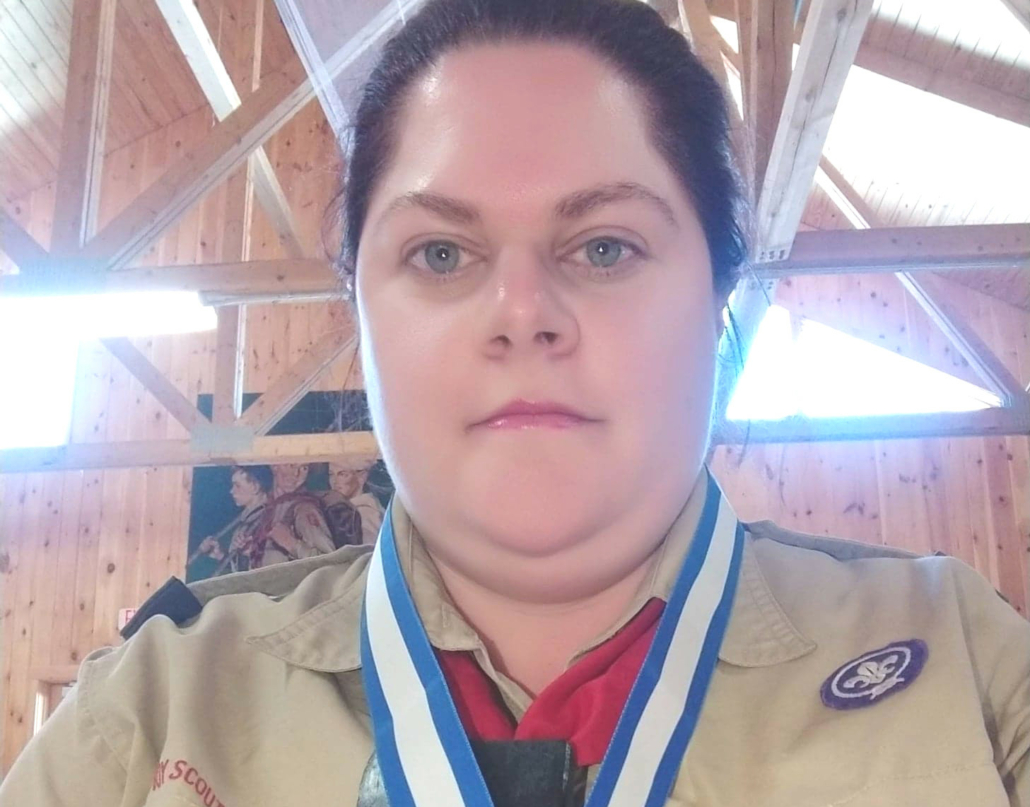 Camp Bomazeen, home of Scout camping in central Maine for the past 75 years, will be led by Julie McKenney this summer following an announcement by Pine Tree Council in December.

McKenney, who lives in Belgrade five minutes from Camp Bomazeen, has served the camp in various capacities over the past seven seasons including as resident camp Shooting Sports Director, resident camp Program Director, and Program and then Camp Director for Cub Scouting programs such as Day Camp and Fun Pack Weekends.

The decision was made shortly before Christmas. Felicia Cates, of Mount Vernon, professional staff adviser to Camp Bomazeen, made the announcement. “Julie is full of energy and excitement with the passion, experience and knowledge to deliver a safe and exciting Scouting program at Bomazeen in 2020,” Cates said.

She works for RSU #18 at the James H Bean School, in Sidney, as an Ed-Tech 2 in the Learning Lab. “I’ve been with this school for three years now. Before I was at Williams Elementary for four years in the same role.”

“I wanted to be the director to continue the amazing traditions at our camp for wonderful volunteers and for our adventurous campers so they will have a place to continue their Scouting journey. I have built some great relationships with these Scouts and Scouters and love to see them grow.”

She has a deep wealth of Scouting and outdoor experience. “As a kid I did a lot of camping with my family back in Wyoming and so I learned a lot of great skills that I enjoy teaching to others,” McKenney said. “My stepfather was a park ranger for the State of Maine for many years and his love of camping rekindled my interest as a teenager and then when my first son came along I thought ‘here we go, we have got to go camping.’”

When her eldest son, Max, joined Cub Scouting, Julie joined with him. “I was a transitional Wolf Den Leader with Pack #654 when the leader was deployed in 2007. Then Cubmaster for Pack #453 in 2010.” When her son moved to Boy Scouts, Julie found opportunities to help there as well. She was an assistant Scoutmaster for Troop #453 and is currently the committee chairman for Pack #454 and Webelos Den Leader for Pack #1776 which is the all-girl Cub Scout Pack, in Sidney, where her daughter Elisha is a Webelos Scout.

McKenney has been successful both in her Scouting life and outside as well. She received the District Award of Merit and the Silver Beaver which are pinnacle awards in Scouting recognizing volunteer Scout leaders. She also was received the Spirit of America Award in 2014 for her community efforts, in Belgrade.

Now that she has been hired, McKinney will hire senior staff such as a program director, area directors, a cook, health officer and then junior staff. Next McKenney and several other members of camp staff will attend a week-long training program to prepare them to safely and effectively operate a Scout camp in compliance with state and federal laws and in accordance with Scouting requirements.

McKenney’s enthusiasm for Camp Bomazeen is evident. “I think the kids who join Scouting – both boys and girls – and attend camp have more of a full experience of Scouting. I think it gives them a chance to practice their skills. It gives them a chance to meet new people and make you friends. We all grow a little when we’re not always with people we know and Camp Bomazeen helps Scouts to become more independent and make choices and live with the outcomes.”