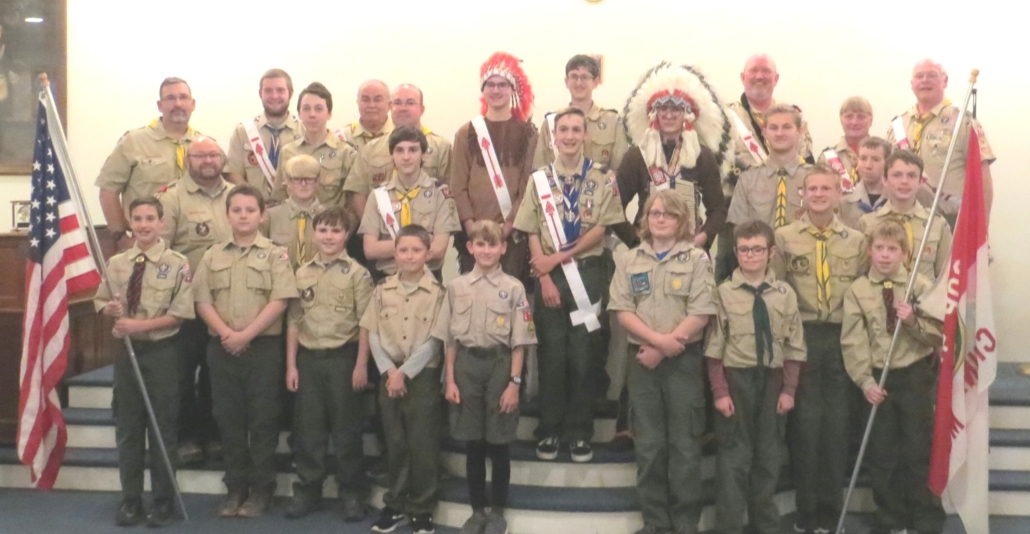 Assistant Scoutmaster Matt Bodine was asked to serve as moderator, and opened the ceremony welcoming all to Rémy’s Court of Honor.

The call to order to open the Eagle Court of Honor was by Chuck Mahaleris, Kennebec District Chairman.

Rémy and his family chose the Order of Arrow and invited other members of Troop #479 to take part in this celebration. Nivek Boostedt as Allowat and Aiden Pettengill as Kichkinet both arrived in Order of Arrow regalia. Kichinet gave credits to experts and leaders along the trail while Allowat received assurance that Rémy has been faithful in serving his troop and has met the qualifications by asking the Scoutmaster. Scoutmaster Scott Adams replies “Yes, he has.”

Allowat asked the new Eagle Scout to renew the Scout Oath. Kichkinet asked Rémy to pin a miniature Eagle’s mother pin on his mother, to present a Eagle father’s pin on his father. He also asked Rémy’s father to remove and replace the Troop 479 neckerchief with the Eagle Neckerchief. Rémy gave a mentor pin to his father for help on his Eagle project and to Nivek Boostedt for his guidance.

Allowat now called on the Scoutmaster, Scott Adams to give the Eagle charge to Rémy. Scott also presented him with Bronze Eagle palms and the Gold Eagle palms for 10 additional merit badges.

Ron Emery was asked to come forward to introduce distinguished guests. First Chuck Mahaleris, Kennebec Valley District Chairperson of the Eagle Board came forward for a special presentation from the Eagle Board. Brother Mark Rustin, Most Worshipful Grand Master of Mason in Maine offered his congratulations and presented Rémy with a new medallion designed especially for all Eagle Scouts in Maine. Senator Matthew Pouliot was pleased to come and present sentiments from the House and Senate. China Town Manager also presented a letter from the town for his efforts to earn the Eagle rank.

Rémy’s Eagle project resulted from volunteering with Central Lodge #45, China’s Masonic Lodge, to push disabled veterans down to their Sunday Mass at the Togus VA. While there, he found out that some veterans are not provided with basic hygiene necessities. As a result, Rémy made 54 hygiene care packages for the veterans at the Togus VA. These packages all consisted of a handmade zippered bag. He solicited donations of a variety of items for the bags such as toothbrushes, toothpastes, eyeglass microfiber cloths, tissues, combs, nail clippers, and electric shavers. Rémy and his volunteers went around to the Cabin in the Woods housing development at Togus handing out the packages to the veterans and their families who live there. The group also attended and took part in the Sunday Services at Togus, and wheeled down some of the wheelchair-bound veterans to the service. The group visited with the veterans and thanked them for their service. All of the extra bags and hygiene products were donated to the Togus VA Volunteer Services to disperse as needed.

Rémy is the son of Lee and Danielle Pettengill, of South China, and is an eighth grader at China Middle School.