The above anthology featured selections from the Columbia/Epic Special Products catalog of artists. It was one of dozens of such Christmas anthologies released during the decades of LP availability and these records were usually priced at $1 under the auspices of Goodyear’s, B.F. Goodrich, Grant’s or other outlets. 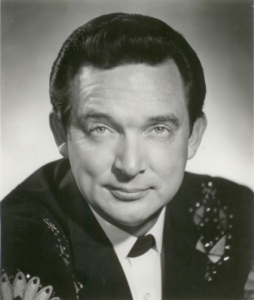 Ray Price (1926-2013) sang Jingle Bells with commendable persuasiveness via his rich effusive baritone, although my favorite version of this song is still Peggy Lee’s with a children’s chorus.

Initially, Price had considered majoring in veterinary science after high school graduation but had second thoughts, because of his small size, working around large steers and horses in his native Texas. Having already shown talent as a singer and guitarist during his teenage years, he began performing on local radio, made some recordings for small labels and, by perseverance, and sheer luck, achieved fame and fortune.

In 1999, Price made headlines when he was arrested for possession of marijuana. When Willie Nelson, being no stranger to pot smoking himself, heard about Price’s arrest, he hailed it as good news for his friend, claiming that the arrest would give Price $5 million worth of free publicity.

Johnny Cash (1932-2003) narrated the seasonal Spirit of Christmas to the tune of Little Town of Bethlehem.

Jimmy Dean (1928-2010) intoned Have Yourself a Merry Little Christmas, a song introduced by Judy Garland in the 1944 movie, Meet Me in Saint Louis; who could forget Jimmy’s 1961 megahit, Big Bad John, his appearance in the 1971 James Bond film Diamonds Are Forever and his breakfast sausage.

Lynn Anderson (1947-2015) was the daughter of singer/songwriter Liz Anderson (1930-2011) and began her career as a regular on the Lawrence Welk Show for two years before heading to Nashville. A few years ago, I wrote a column about one of her Columbia albums, which was co-produced by her ex-husband, Glenn Sutton. She, like her mother had a sweet voice and her Soon It Will Be Christmas Day, not to be confused with Silver Bells, is quite lovely.

Marty Robbins (1925-1982) charted in the late ‘50s and early ‘60s with four very captivating classics, White Sport Coat and a Pink Carnation, Story of My Life, Seventeen, and Devil Woman. He died very early just after heart surgery. His Hark the Herald Angels Sing is good but not his best.

Now 62, Tanya Tucker did a very good Silver Bells during her teenage years after achieving fame and fortune at 14 years old with What’s Your Mama’s Name? and Delta Dawn. She had romances with singers Merle Haggard, Andy Gibbs and Glen Campbell, and actor Don Johnson.

The three remaining tracks are as follows:

And the last selection, an absolute gem, is the Chuck Wagon Gang’s a cappella Joy to the World.

A solid recommendation for Christmas music.

Up and down the Kennebec Valley: Maine Supreme Court Chief Justices from Kennebec... I’M JUST CURIOUS: The holiday season 2020
Scroll to top