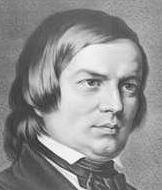 German composer Robert Schumann (1810-1856) composed masterworks of symphonies, concertos, solo keyboard, chamber music, choir and lieder. Pieces to introduce anyone new to his music would include the Rhenish Symphony with its evocation of the Rhine River, in Germany, the Spring Symphony in its opening brass fanfare and the sense of re-birth that begins every March 21, and the three sublime Concertos for piano, violin and cello.

Schumann was also one of the most important music critics of the 1800s, along with his contemporary in France, composer Hector Berlioz (1803-1869). And he wrote a review of Brahms’s music in 1853, when that composer was only 20, hailing him as a savior of European music.

He and his wife, Clara, also accepted Brahms as a new member of the family. Sadly, Schumann died in a hospital three years later where he was committed after his manic/depressive struggles overtook him and he jumped into the Rhine attempting to drown himself. An older sister had committed suicide 30 years earlier in 1825. But Clara and Brahms would be lifelong friends until she died in 1896.

Arthur Fiedler was music director of the Boston Pops from 1930 until his death in 1979, at the age of 83, and made hundreds of recordings for RCA Victor and then the German-based Deutsche Grammophon/Polydor label starting in the late ‘60s when he, the Boston Pops and the regular Boston Symphony switched over.

Schumann’s Abendlied, originally composed for four-hand piano, and the very well-known Traumeri, from the composer’s solo piano Kinderszenen or Scenes of Childhood, were arranged for orchestra and given very hauntingly exquisite performances by Fiedler and his players. I have many Boston Pops recordings from the Fiedler years but I cannot think of a better one than this gem.

This past Saturday, March 7, the Waterville Opera House had the Met production of Handel’s early opera, Agrippina, by delayed broadcast of a week. The plot involves sex, politics and off-and-on friendship and romance. Agrippina, the devious wife of the Roman Emperor, Claudius, was sung by Joyce di Donato. Other singers were Brenda Rae as Poppea, Kate Lindsey as Poppea’s heartthrob Ottone, Matthew Rose as Claudius etc.

This production changed the original grim story into a comedy with very suggestive humor, and situations and a frequently scantily clad Brenda Rae in her role as Poppea. Comments on the visual details end here. The music and singing were exemplary.

Wagner’s magnificent opera, The Flying Dutchman, is scheduled for this coming Saturday, March 14, starting at the usual time of 12:55 p.m.

GARDEN WORKS – Seeds of your dreams: More ideas from the catalog, Part... I’M JUST CURIOUS: Bored? Not me!
Scroll to top