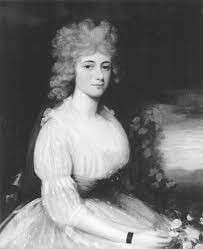 The sixth former First Lady, Louisa Catherine Johnson Adams (1775-1852) was born in London, England, and was one of only two first ladies not born in the U.S., the other being Melania Trump who entered the world in 1970 in Yugoslavia.

Louisa was also born illegitimately; her mother was referred to by her grandson, the noted historian and cynic Henry Adams (1838-1918), as “one of the deeper mysteries of metaphysical theology.”

In America’s First Ladies, Christine Sadler describes Louisa as having “the delightful chore of making a parlor out of the vast East Room of the White House in which her mother-in-law had strung the family wash to dry 24 years earlier.”

Like Dolly Madison, she was quite the gracious hostess (although not the very bubbly social butterfly that Dolly was) and married to a president who preferred to be left alone in his study, more about his personality coming soon.

At first Louisa was not accepted by her mother-in-law Abigail Adams, but the older woman soon found they both had a lot in common, especially having very strong opinions which the gentlemen around them found at times unbearable, and they got along quite well.

Unlike her mother-in-law, Louisa was prone to depression and suffered from frail health. 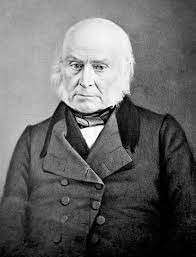 By many scholars, including his detractors, Quincy Adams is considered one of the smartest to hold office with a very high IQ. Several of his predecessors recognized these qualities and he served at diplomatic posts in England, France, the Nether­lands, Prussia and Russia. In addition he was fluent in Latin, Greek, French, German, Spanish, Italian, Dutch and Russian.

Socially, he could be a stiff arrogant prig and really did not enjoy being with most people, much like James Madison .

Interestingly, after leaving the White House, Q was elected by his home state of Massachusetts to the House of Representatives where his popularity was far greater than as chief executive. His arguably finest moment, as one of the handful of leaders unwaveringly opposed to slavery, was giving a speech defending the slaves who took over the Amistad ship transporting them from Africa to the United States and getting them acquitted and allowed to return to their homeland.

He served in Congress for the remainder of his life where in 1848, at the age of 81, he suffered a stroke while giving a speech in the chamber.

Q was carried into his private office where he died in the presence of his wife and others, including the Illinois Representative Abraham Lincoln.

Louisa outlived her husband by four years and died of a heart attack in 1852 at the age of 77.

A few other facts:

Q and Louisa were believed to have married on the rebound, as both had suffered broken hearts in a previous relationship.

Q amassed a collection of different translations of the Bible.

While president, he bathed naked every morning at 5 a.m. in the Potomac River no matter what season of the year.

The above-mentioned grandson recounts an incident in his autobiography The Education of Henry Adams when, in sixth grade, he told his mother that he didn’t feel like going to school; whereupon grandfather, who was referred to by all his grandchildren as the President, took the lad firmly by the hand, walked him two miles to the schoolhouse never saying a word, escorted him into the classroom and sat him down at his desk.

The President then returned in the afternoon and repeated the procedure. Grandson never complained again.

Ironically, Quincy’s vice-president was South Carolina Senator John C. Calhoun (1782-1850) who was an unwavering supporter of slavery and a “White South.”