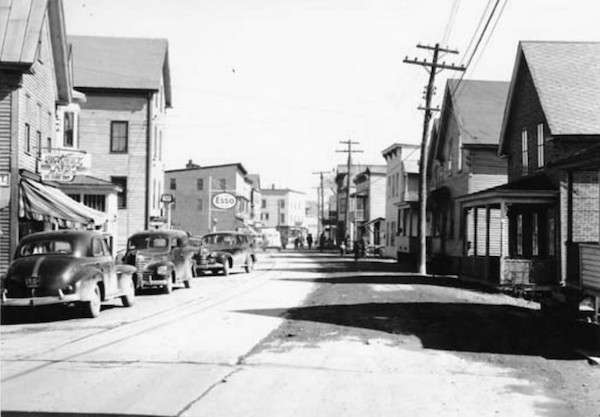 Water St., circa 1940s, looking north. The Esso sign is where Bilodeau’s Garage was located. (photo courtesy of colby.edu/mapping-waterville/)

This week we will continue our tour of The Plains. Last week we left off at Gold Street. From this point on it gets pretty simple.

One of the first buildings you will come across on the east side of Water St. is the original home of Jean Baptiste Mathieu, presumably the first permanent FrenchCanadian settler in Waterville and his wife, Sarah Dostie, who came here from Beauceville, Québec, in 1827, and settled in their Water Street home in 1831. The rest of the street on that side is made up of single family homes and many duplex and apartment buildings.

However, on the west side, from Gold St., there was Bilodeau’s Service Station where you could buy your gas, and have your car repaired (That building is now part of KVCAP’s campus).

Next , setting a little ways back, was the Notre Dame Church, on the second floor of the building, and Notre Dame Parochial School on the ground floor and basement.

Next came the South End Café. That establishment was famous for their fried clams. My dad would sometimes come home from working the 3 – 11 shift at Hollingsworth & Whitney Paper mill, in Winslow, later Scott Paper Co., with some clams. We could only watch, if we were still awake at that hour.

Next door to the café was Gabe’s Barber Shop. Back when I was in the sixth and seventh grades, I attended St. Joseph’s School for Boys on Summer St., between Kimball and Preston streets (where the Notre Dame Church now stands). It was either every week, or every other week, on Wednesday, my father would give me 25-cents, and I would walk to Gabe’s Barber Shop during lunch, for a haircut. A couple of times, when I felt I didn’t need a haircut, I would skip the trip and pocket the quarter. My dad, somehow, would always know.

Another thing about Gabe Giroux, who was a large, rotund man, was that he was the only Republican, that I can remember, who was ever elected to the Waterville Board of Aldermen, from Ward 7. That was before Waterville went to a council form of government.

A little further down was Dick’s Market, now closed, but still stands, with the sign in front, but is actually the location of Stripes-A-Lot.

From there, on the corner of Halde St., was a house that was rumored to have an active still in the basement during Prohibition. That was proved to be true when the home was demolished and a “secret” room was discovered in the basement.

Next to the house, was a Waterville Fire Department substation. Across the street was the Second Baptist Church, which is still there today. More homes lined the street until the corner of Grove St. At the corner of the south side of Grove St., was LaVerdiere’s Market, a little larger store than the small markets. 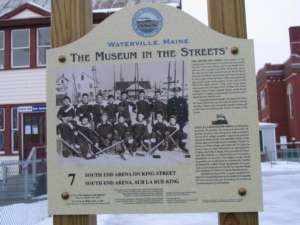 Museum In The Street plaque of the South End Arena.

Now we’re going to return to Gold St., and the old Notre Dame Church, which is now KVCAP. Looking west, and across King St., was the South End Arena, an Olympic-size outside ice skating and hockey rink, where many of Waterville High School’s star hockey players honed their skills. We were affectionally – or not – known as the South End Rink Rats. Many varsity games were also played there before the construction of the Alfond Arena on the Colby College campus.

Many days and nights were spent at that arena. During the winter, it wasn’t unusual for me to come home from school, drop the books, grab the hockey equipment, and head out to the rink. The two years I attended St. Joseph’s School, it was common for me to bring my hockey equipment to school, and go directly to the rink after school, and not return home until after dark.

During my high school years, many evenings were spent, after hockey, to participate in public skating with the girls, after which we scraped the ice surface by hand, and “flooded” the rink after it closed at 10 p.m.

The founder, and caretaker of the rink, which was on his property, was Waterville Police Captain Arthur Gagne. To those of us who took advantage of the facility, it wasn’t South End Arena, it was “Art’s.” Gagne took care of the rink, mostly from his own money, with the assistance of a small stipend from the city. He also was the chaperone, and he had a zero tolerance policy for any unacceptable behavior. We all loved “Art”.

We have now seen an overview of what it looked like on Water Street in the 1950s and 1960s. Now, I must confess: we are talking about 60-plus years ago. The mind doesn’t quite remember everything, so I’m sure I have omitted some places. My apologies to those I missed.