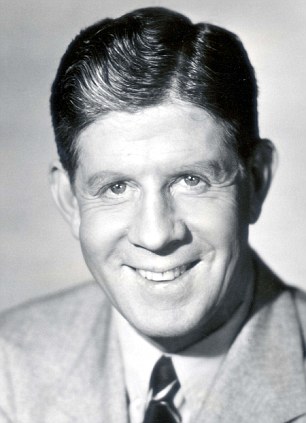 Singer Rudy Vallee (1901-1986) was one of the first matinee idol crooners, starting in the late ‘20s. Frantic mobs of teenage girls went berserk at his live appearances as they did later with Sinatra, Presley and the Beatles, although with the shortly coming emergence of Russ Colombo and Bing Crosby and their even smoother use of the microphone, Vallee’s peak years with the swooning ladies would wane within two years but he did remain an influential figure in the entertainment world.

Born in Vermont, he grew up in Westbrook, did a brief stint in the army, played trombone in a dance orchestra at London’s Savoy Hotel from 1924-25, and returned to Maine where he briefly attended the University of Maine at Orono.

With relation to Vallee’s Orono years, he worked for a dance band led by a gentleman named Ralph Wallace, who fired Vallee for constantly being late to rehearsals.

Wallace later worked as a deejay for the now-defunct WTVL, here in Waterville, having retired during the late ‘50s to my hometown of nearby East Vassalboro after a broadcasting career in Cleveland, Ohio. I got to know him, was given the opportunity to watch him spin records on four different turntables on his radio show, explored the station’s record library with utter fascination, and was given 78 record sets of Glenn Miller, Tommy Dorsey, harmonica virtuoso Larry Adler and soprano Dorothy Kirsten from his own vast collection.

His program, Time for Wally, ran five days a week for two hours in the morning and in the afternoon; he would play records and tell a few jokes (He once commented to me that, all too often, the disc jockeys were stuck with playing the same crappy records).

Back to the Vallee/Wallace connection. An acquaintance went to a San Francisco party honoring Rudy during the 1970s and mentioned his old boss. Vallee retorted jokingly, “Ralph Wallace!!!! Is that S.O.B. still living?” But he sent best wishes back to Maine.

Vallee transferred to Yale University where he graduated with a degree in philosophy and formed his own group, the Connecticut Yankees. They scored a hit record on Victor 78s in 1929, the University of Maine Stein Song, its success a bit of a mystery because of its cloying corniness but Vallee did sing with commitment, pep and warmth.

I recently listened to two other Victor ten inch 78s of the singer. The first, Victor -22136, recorded August 15 and August 21, 1929 – contains two wistful love songs; You Want Lovin’ (But I Want Love), written by Sam Coslow (1902 – 1982) who turned out dozens of songs for Paramount Pictures, and Lonely Troubadour.

Victor 24581, recorded March 5, 1934, featured two selections, Hold My Hand, and Nasty Man, that were in the 1934 filmed music revue, George White’s Scandals. He also appeared in the film and got into a fistfight with its producer George White.

All four songs were of higher quality than the Stein Song, sung and played with charming musicality and can be heard on YouTube.