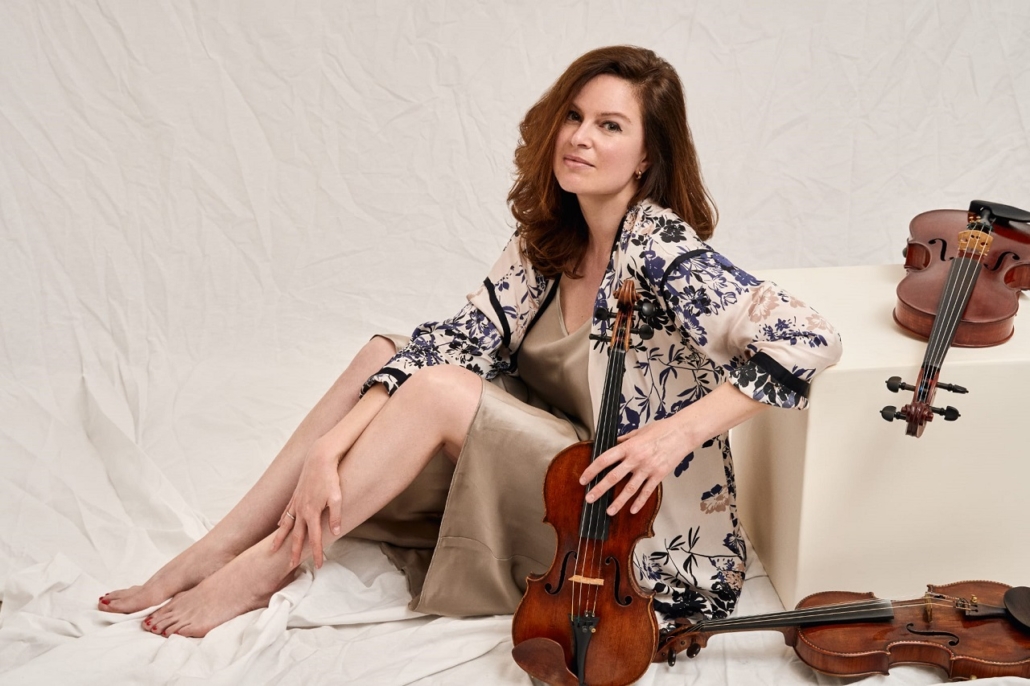 Although she has not yet set foot in the United States, Moldavian violinist Valeria Zorina has concertized extensively in England and Europe to tremendous and deserved acclaim. The late violinist Sir Yehudi Menuhin (1916-1999) mentored Valeria during her earlier years while Sir Colin Davis (1927-2013) and Mstislav Rostropovich (1927-2007) are among the conductors who have collaborated with her in concert. Since 2015, she has taught at a conservatory in Madrid, Spain.

Just released in early July, Valeria’s CD, Soundmaps Extended Realities, is a collaboration with Russian pianist Evgeny Sinaiski in which she takes a different approach from the usual recital.

Valeria Zorina has chosen six composers whose pieces have gone beyond the usual tuning of a violin at E, A, D, and G to achieve what is called scordatura, itself defined in the Harvard Dictionary of Music as “Abnormal tuning of a stringed instrument in order to obtain unusual chords, facilitate difficult passages, or change the tone color.” Having an unusually brilliant level of technique and musicality, she has tuned her instrument to the specific dimensions of each work and achieved very inspired results.

Belgian violinist/ composer/ conductor Ysaye is represented by his Poeme Elegiaque, a very passionate 14 minute piece for violin and piano that has a certain sadness in keeping with its elegiac quality of remembrance of a departed loved one.

Ysaye was taught by the violinist/composers Henri Vieuxtemps (1820-1881) and Henryk Wienawski (1835-1880) whose own Concertos personify the 19th century romantic virtuoso tradition, both of them tremendously captivated by Ysaye’s ability to draw sounds out of the violin that nobody else could.

Ysaye recorded several discs during the acoustic era as a violinist and as Music Director of the Cincinatti Symphony and several can be heard on youtube.

The German baroque composer Biber is represented by the 9th Rosary Sonata known as the Carrying of the Cross and a piece combining sublime spiritual beauty with fascinating sororities in its tunings.

The Cuban composer/conductor Aguirre’s Four Nocturnes With Masks, from 2017, are four minutes in duration. They consist of Winter, Dies Irae, Adoration and Dust of Snow and each Nocturne is a tribute to another composer – Gyorgy Kurtag, Manuel de Falla, Olivier Messiaen and Morton Feldman.

They powerfully and poetically evoke a stark middle of the night atmosphere of spooks going bump in the night and convey why Aguirre is not only a major figure in his native country but also in Europe.

Vecsey’s Nuit du Nord is a gem of extraordinarily poignant beauty and one I have shared often with several friends to the house. Vecsey studied with Joseph Joachim who was a very close friend of Johannes Brahms. Recordings of his playing can be heard on YouTube also.

The Italian composer Platini provided his Four Souvenirs, from 2018, and another example of the combination of bleakness and beauty in music of the 21st century, although with a quieter, more subtle range of dynamics than those of Aguirre .

Saint-Saens arguably most well-known piece Danse Macabre has the kind of tuning that tellingly contributed to its diabolical quality in which Death plays his fiddle at midnight on Halloween and calls all the skeletons from their graves to dance all night until the rooster gives his dawn cocka-doodle-doo wakeup call.

This CD has sustained several hearings and comes with an A-plus recommendation.

Next paragraph from Robert PT Coffin’s Kennebec Crystals, an essay on the harvesting of ice from the Kennebec River:

“Then the field of the harvest was marked off for the game of wealth to be played there. Men walked with gougers tracing the line their narrow plows made straight as a die across the river. After them came the horse-drawn gougers cutting a deeper double furrow. Another army of men took up the game at right angles to the others, crisscrossing the wide fields. And then the sawyers came, slow with their loads of shoulder muscle and woolen shirts. They set in their saws and began the cutting of the gigantic checkers from the checkerboard on the hard Kennebec. The men stood to their work with both hands on the handles each side of their long tools, going down, coming back, fifty men keeping time as they ate into the stuff that meant their life, bed, and board, and fodder for their cattle. It was a sight to see the gates – ajar mustaches swinging like pendulums, gold and dark, and the breath in them changing to icicles as they worked. Every so often the picks spoke, and the sawed lines lengthened ahead of the sawyers. Noon saw a dozen checkerboards marked out on the river. One notable fact about the tools of the ice industry on the Kennebec is this: they were the only tools that were good enough to remain unchanged from the beginning of the industry to the end of it.”