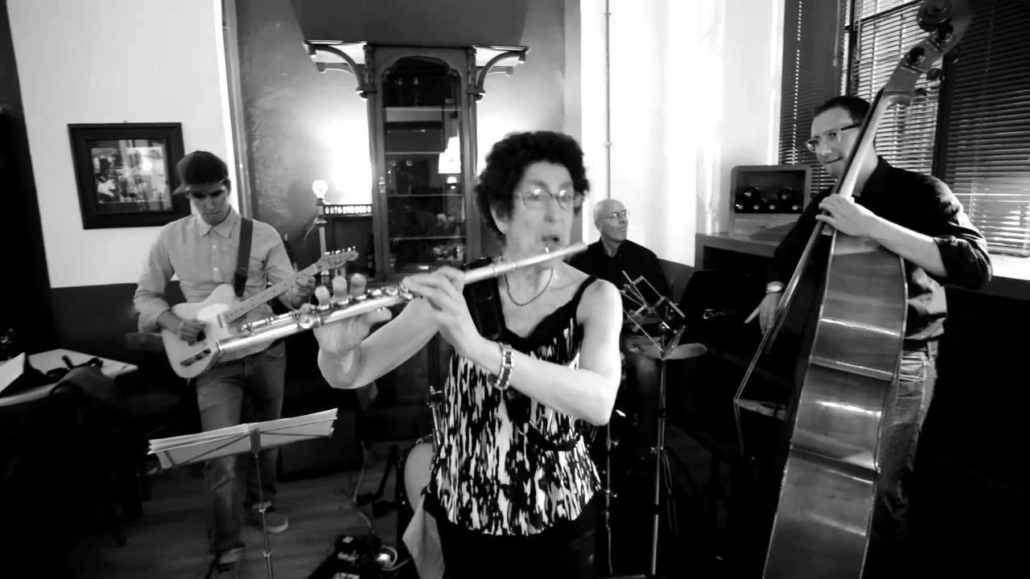 Carol Sudhalter, now in her 70s, has gained a much-justified fan base in New York City’s Queens in the last 35 to 40 years as one of the finest jazz musicians on baritone sax and flute. Her quartet, consisting of three extraordinary musicians, include pianist Patrick Poladian, Kevin Hailey on the traditional double bass and Mike Campenni on drums.

They perform nine selections in a 50-minute program; the composers are comprised of such jazz legends as Bill Evans, Sunny Rollins, and Hank Mobley, along with good tunes by pianist Poladian, Carol herself (in which she sings very nicely) and a beauty, Luiza, from the Bossa Nova legend Antonio Carlos Jobim.

Carol is open to bookings here in Maine. For those who run clubs and other such venues, the contact email address is sudhalter.com . Her music making can also be heard on several YouTubes.

This CD is one that holds up with repeat listenings.

Given my perpetual fascination with duplicate recordings of favorite classical works, I offer quick comments on four different renditions of the ever popular Tchaikovsky First Piano Concerto, arguably the most famous Piano Concerto ever composed:

A live broadcast featuring Van Cliburn with Istvan Kertesz conducting the Berlin Philharmonic; Priceless C70581, cassette, released mid-1980s. It is a good performance but doesn’t stand out like others. Strange, because Cliburn and Kertesz did exceptional recordings in otherwise separate realms. And there is no information with the tape about anything.

Another Tchaikovsky work is the Violin Concerto in an exciting Yehudi Menuhin/Ferenc Fricsay collaboration with the RIAS Orchestra, of Berlin, possibly the same studio one released elsewhere on Deutsche Grammophon.

Dichter’s re-make is even more exciting and was recorded the same day, March 22, 1988, as the composer’s Second Symphony, the Little Russian, with the gifted well-known David Zinman replacing Latham-Koenig at the podium.

The late pianist Hiroko Nakamura possessed an elegant balance of sweet lyricism and tart intensity that added an extra special quality to these much-recorded works. It was a style that didn’t call attention to itself, unlike the differently gauged flamboyance of such virtuoso titans as Horowitz, Richter, Lazar Berman, and Georg Bolet. There were a few moments when her lyricism skirted blandness. But these performances were quite enjoyable. And Svetlanov conducted with lots of excitement and intensity.

Geza Anda (1921-1976) left a sizable recorded legacy of crown jewels. He had precisely-filleted virtuosity, probing musicianship, commitment to the score, legendary virtuosity and a roaring zest for the good things in life – wine, good hardcover books, records with a high class music system and great conversation for when hard labor was over.

According to one observer, “he disliked sackcloth and ashes.”

The performances of both Concertos, with the superlatively powerful and eloquent conducting of the horrifically underrated Alceo Galliera (1910-1996) and the sizzling two very famous Preludes render this CD an absolute must for listeners who truly care about this music.

Another Jim Thompson quote, from his 1961 novel, The Transgressors, describing a good guy deputy sheriff and a bad guy muscle man, Augie the Hog Pellino, from the Tony Soprano cosmopolitan New Jersey areas, stalking each other in the West Texas nighttime countryside, the sheriff with the greater advantage – “Pellino was doubtless a real handy boy around the big towns, but out here he probably stumbled over his own feet. Set a little trap for him, and he’d run over himself to get into it.”

FOR YOUR HEALTH: Health Services And Screenings Every Woman Should Know Abo... I’M JUST CURIOUS: Welcome to Citrus County, Florida
Scroll to top