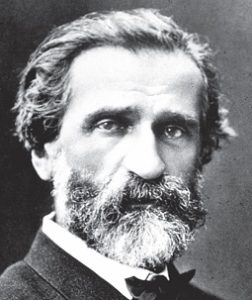 Verdi’s Rigoletto, along with Aida, and La Traviata, are arguably his three most popular operas. It is also the only opera I have seen in any Met productions, once in their 1966 touring appearance at Cony High School, locally in Augusta, and in 2007 at the Lincoln Center stage in New York City (The pair of $25 tickets my daughter purchased had us sitting in the top row of the highest balcony where we could touch the ceiling standing up and everybody on the stage below were tiny ants.).

It received its 1851 world premiere in Venice and was composed in 40 days. The plot involves a depraved womanizer, the Duke of Mantua; his evil court jester, Rigoletto; and Gilda, the one decent person in this trio. A summary of the original Victor Hugo story line can be easily googled and is classic operatic melodrama and tragedy. The musical numbers include the immortal Questa o Quella and La Donna e Mobile for the Duke of Mantua tenor and the exquisite Caro Nome for Gilda’s soprano.

Soprano Hedda Heusser and tenor Paul Conrad are far from household names but they sang beautifully, and the underrated conductor, Walter Goehr, led a very good performance. The Opera Society, Musical Masterpiece Society and its parent label Concert Hall were mail order record labels, along with another subsidiary Jazztone, and I have found sizable numbers of their releases at yard sales and thrift shops.

I am not sure if this performance is on YouTube but others are, for those interested listeners. It is also a very good beginner opera for the adventurous.

I started watching Netflix’s Narco this past weekend and am already on episode eight of the first season. The series dramatizes the career of the evil Pedro Escobar (1949-1993) whose criminal empire reigned over Columbia with terror until his just death in 1993 and of a fictitious DEA agent, Steve Murphy, whose narration provides historical context. Wagner Moura’s Escobar and Boyd Holbrooke’s Murphy are very well acted with a superb supporting cast, documentary footage of the last 50 years is interspersed and the production logistics are pulled off magnificently.

I recently posted a selection by a native poet, Grenville Mellen. Here are the four quite nicely worded opening lines of his impassioned The True Glory of America:

“Italia’s vales and fountains,
Though beautiful ye be,
I love my soaring mountains
And forests more than ye.”

Up and down the Kennebec Valley: Albion I’M JUST CURIOUS: What to write about
Scroll to top