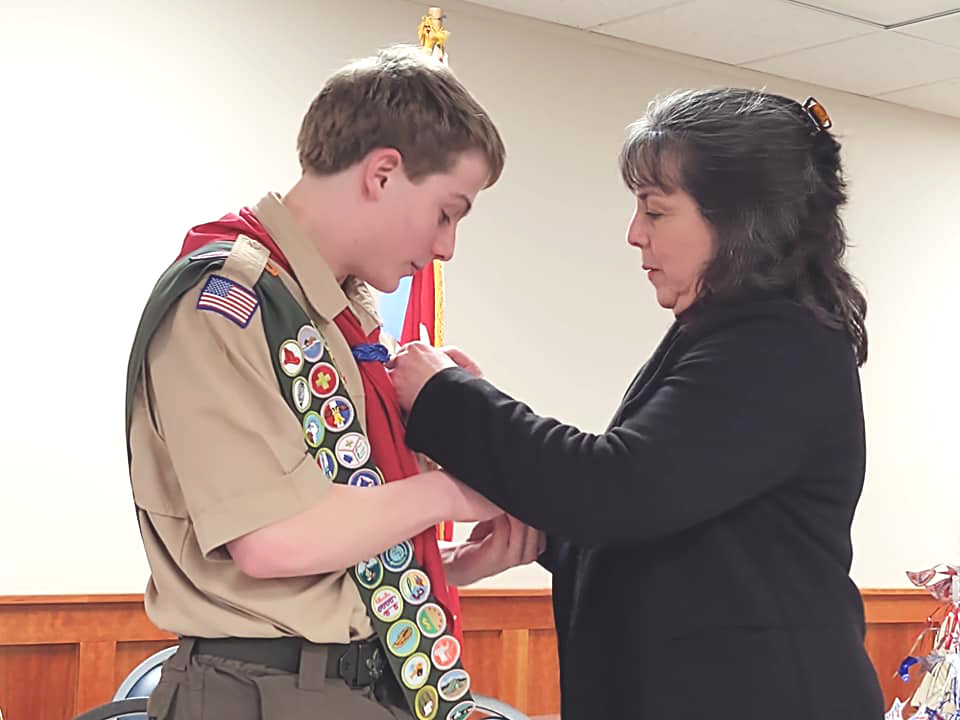 Sam’s mother, pins the Eagle Scout medal on her son’s chest during the ceremony. (contributed photo)

Family and friends, along with local officials, gathered at the Waterville Lodge #33, on County Road, for the presentation of Scouting’s highest honor, the Eagle Scout rank, to Samuel K. Bernier during a ceremony held on December 14.

Bernier, 15, is the son of Daniel and Jen Bernier, attends Waterville High School as a sophomore.

This past summer, Sam led his Eagle Scout project for the Waterville Community Land Trust. Bernier and a group of Scouts and other volunteers established a community park on the banks of the Kennebec River which required hours of site preparation, planting and erosion control. What was the most difficult part of the project? Sam replied, “Doing a lot of work when it was really hot was hard. Dealing with things that were out of my control like weather and weeds was also difficult. Planting 91 plants in two new gardens was a hot, difficult job. Not all of the plants did well at first. Slugs damaged some of the plants in the Woodland Garden. Transporting water to the site was not an easy job but we ended up with a lot of rain and that helped.” 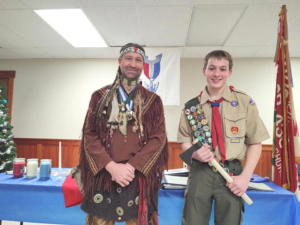 Christopher “Montawagon” Bernier, left, of the Bomazeen Bushcraft program presents a tomahawk to Eagle Scout Sam Bernier. They are not related. (contributed photo)

He also pointed to unexpected challenges with aggressive Japanese Knot Weed, invasive roses, and scrubby weeds. The most surprising part? “I was surprised that so many people were so willing to donate money for materials and plants,” Sam said. “These donations allowed me and my team to focus on the two gardens instead of fundraising.”

State Senator Scott Cyrway, a former Scout leader himself, presented a Legislative Sentiment introduced in the House by Repres­entatives Bruce White and Colleen Madigan, and by himself in the Senate.

Bruce Rueger, Sam’s Scoutmaster, served as master of ceremonies and said, “Sam is an outstanding Scout. He truly personifies the Scout Oath and Law. You can see the positive impact Scouting has had on this young man who has been in the program since he was a Tiger Cub (Kindergarten).”

When not involved in Scouting, Sam enjoys swimming and is a member of the Mid-Maine Dolphins and the Waterville High School swim program. He is also an avid hiker. This past summer he was able to put both of those interests to use along with Scouting when he worked at Camp Bomazeen, in Belgrade, as a lifeguard and Day Camp volunteer.