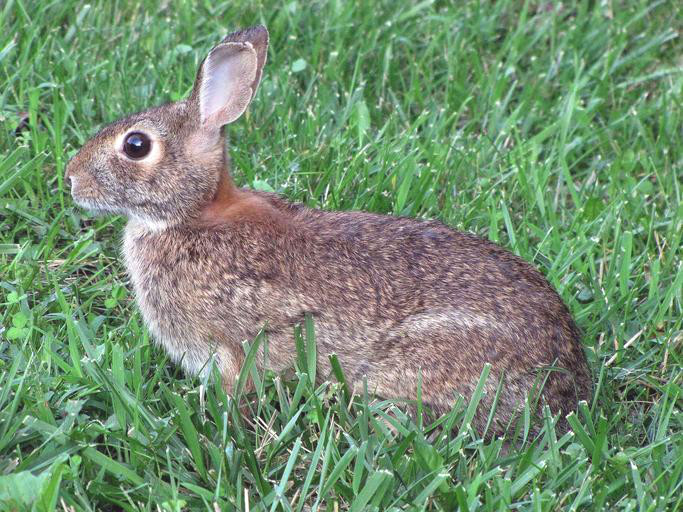 Walking through the woods following a snowfall can show evidence of many wildlife tracks. This past winter, I did see tracks of the Eastern Cottontail rabbit.

The Eastern Cottontail, Salvilagus floridanus, is actually a New World cottontail rabbit, a member of the family Leporidae. It is one of the most common rabbit species in North America.

Here in Maine, its numbers has a profound affect on the Canada lynx population. The survival rate of the lynx is dependent on a healthy cottontail population.

The Eastern Cottontail is chunky red-brown or gray-brown in appearance with large hind feet, long ears and a short fluffy white tail. Its underside fur is white. There is a rusty patch on the tail.

Its appearance differs from that of a hare in that it has a brownish-gray coloring around the head and neck. The body is lighter color with a white underside on the tail. It has large brown eyes to see and large ears to listen for danger. In the winter, its coloring is more gray than brown. The kittens develop the same coloring after a few weeks, but they also have a white blaze that goes down their forehead. This marking eventually disappears. The average adult weighs between 2-4 pounds. However, the female tends to be heavier.

They can be found in the eastern and southwestern United States, southern Canada, eastern Mexico all the way down to South America. Originally, it was not found in New England, but it has been introduced here and now competes for habitat with the native New England cottontail.

The rabbits are active at night, and do not hibernate in winter. Predators include hawks, owls, coyotes, foxes, wolves, the aforementioned lynx, bobcats, weasels, raccoons, and even domestic cats and dogs. Trace amounts of eastern cottontail remains have been detected in black bears. On farms and in gardens, they are considered pests and are often trapped or shot to protect plants.

Reproductive maturity occurs at about two to three months of age. The average period of gestation is 28 days, ranging from 25 – 35 days. The young are born with a very fine coat of hair and are blind. Their eyes begin to open by four to seven days.

Females can have one to seven litters of one to 12 young, called kits, in a year; however, they average three to four litters per year and the average number of kits is five.

The leading cause of mortality is probably by predators. The second highest number of deaths occur with automobile collisions. The peak period collisions is in the spring, March through May. The annual adult survival rate is estimated at 20 percent, and the average longevity is 15 months in the wild.

Mating occurs from February to September. Males will mate with more than one female. Females have 2 to 4 large litters of up to nine young in a year. After the female has given birth to her offspring, she can mate again immediately thereafter. The kittens are weaned after three weeks and leave the nest after seven weeks. The kittens then reach mating age after three months.

The Eastern cottontail is a very territorial animal. When running, it can jump from 15 feet, which can aid in avoiding predators. When chased, it runs in a zigzag pattern so the animal chasing it will lose its scent, making the rabbit harder to follow. They can run up to 18 miles per hour. The cottontail prefers an area where it can hide quickly but be out in the open. Forests, swamps, thickets, bushes or open areas where shelter is close by are optimal habitation sites for this species. Cottontails do not dig burrows, but rather rest in a form, a shallow, scratched-out depression in a clump of grass or under brush. It may use the dens of groundhogs as a temporary home or during heavy snow.

Typically, eastern cottontails occupy habitats in and around farms, including fields, pastures, open woods, thickets associated with fencerows, wooded thickets, forest edges and suburban areas with adequate food and cover. They are also found in swamps and marshes, and usually avoid dense woods. They are seldom found in deep woods.

I had one appear in my backyard a few years ago and seemed to have settled in very well. It apparently found a buffet of clover that grows wild around my garden area. It stayed around for about a week. Unfortunately, although it seemed content where it was, the constant attempt of neighborhood kids to capture it led it to run off in a desperate escape attempt on several occasions. I found it dead one Sunday morning, apparently the victim of a road kill collision with a car.

We once had one reside near our camp. Our neighbor had a patch of clover that it seemed to enjoy, but liked to raid the other neighbor’s garden. I think it met with an unfortunate demise – commonly referred to as lead poisoning.

Wild rabbits. Adorable little creatures, but they can wear out their welcome.