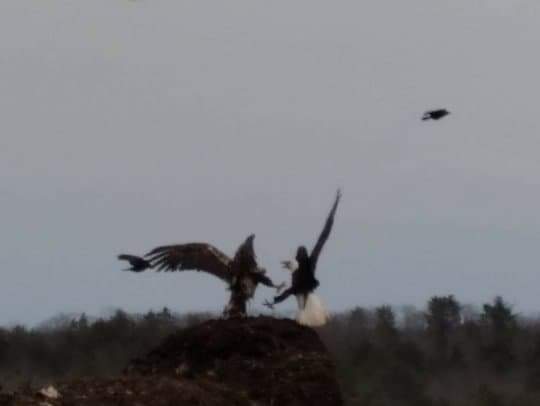 Osprey and bald eagle do battle. (photo by Gary Kennedy)

Recently, a regular contributor to The Town Line, Gary Kennedy, of Chelsea, and his wife Julie witnessed a battle between an osprey and a bald eagle, probably over territorial rites – or food.

I could relate to the story as my wife and I witnessed the same a few years ago while fishing on Webber Pond. In both instances, the bald eagle won the day. So, do bald eagles and ospreys get along?

Opportunistic bald eagles and ospreys share much of the same habitat, so ospreys are frequently the victims of nest raids by the eagles. Proud, powerful and the national symbol of the United States, bald eagles are birds of prey that are extremely territorial during nesting season but highly social at other times.

They use their talons to fish; or, instead of catching their own, they’ll go after an osprey or another fish-eating bird, forcing it to drop its prey, which the eagle grabs in midair.

Once an eagle gets you in its sights, it can be a vigorous foe—as that osprey recently learned.

Ospreys require nest sites in open surroundings for easy approach, with wide, sturdy bases and safety from ground predators, such as raccoons.

In Kennedy’s video, you see a bald eagle and an osprey do combat. As part of their plan of attack, at dusk, with both osprey parents away, the bald eagle will sweep in from over the water toward the nest containing three chicks. One of the osprey parents will engage the eagle, ready to defend the nest, but it can’t match the speed and strength of the eagle, which manages to nab one of the chicks with its huge talons before taking off.

It’s not uncommon for osprey to lose their entire brood to eagle attacks.

Adept at soaring and diving but not as maneuverable as other hawks, ospreys fly with stiff wingbeats in a steady, rowing motion. They do, however, vigorously chase birds that encroach on their nests.

But ospreys, too, launch their share of attacks ­– and some of them are on eagles. They have been observed attacking a Canada gooose who happened to be at the wrong place at the wrong time.

Is it a coincidence that bald eagles will frequently build their nests near osprey nests. Not really. It’s just the bald eagle is smart enough to know that if it nests near ospreys, that it will have ample opportunity to steal fish from the ospreys throughout summer?

However, there are many differences between ospreys and bald eagles.

Size: Osprey have an average 59- to 70-inch wingspan and weigh three to four pounds. They have long, narrow wings with a marked kink that makes them look like an M-shape from below.

The bald eagle is one of the largest birds in North America, with an average 80-inch wingspan and weighing 6.5 to almost 14 pounds.

Diet: Osprey eat a diet of about 99 percent fish, usually 4 – 12 inches long. The type of fish varies depending on where in the world the osprey lives.

Bald eagles love fish as well, and sometimes rather than doing their own hunting they will harass osprey, making them drop their fish or even steal their fish right out of their talons.

Bald eagles also eat birds, reptiles, amphibians, rabbits and muskrat, both live or as carrion. They sometimes gorge on food and digest it over several days, and they can also survive fasting for many days or even weeks.

Beak: An osprey’s beak is black, short and has a sharp hook that helps it tear into fish to eat.

Bald eagles have a yellow beak which is also hooked for tearing into flesh.

Special abilities: Osprey can dive about three feet into the water to catch fish, and they can dive both head and feet first. They also have the ability to take off straight from the water instead of having to swim to shore.

Sometimes bald eagles hunt cooperatively, with one individual flushing prey toward another.

Nest: Osprey nests are built of sticks and lined with bark, sod, grasses, corn stalks and other softer materials. Most nesting platforms are about 5 feet wide and a foot deep. However, it has been seen that osprey who nest in the same place year after year have ended up with nests 10-13 feet deep and 3-6 feet in diameter.

Bald eagles nest in trees, usually conifers, and create huge nests — five to six feet wide and two to four feet deep – out of sticks lined with grass, moss or corn stalks. Nests can take up to three months to build. Bald eagles typically build near the trunk of a tree, high but not at the crown like osprey. Some eagles also nest on the ground when necessary, using kelp or driftwood for construction near coastal shorelines.

Ospreys and bald eagles, although they usually share territory, and in the case of the eagle, the osprey’s catch of the day, are quite different in their own right.

Has anyone pitched a no-hitter in the World Series?