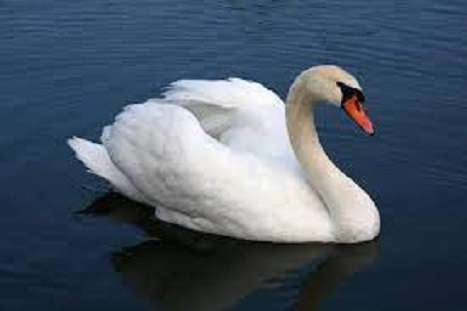 It has been reported that a bevy of swans has been spotted on Webber Pond. Interesting. So I had to investigate. Oh, by the way, a bevy of swans is when they are on the ground. While in flight they are called a wedge.

The swan is known around the world for its beauty, elegance, and grace.

The swan has the ability to swim and fly with incredible speed and agility. This bird is also very intelligent, devoted to its mate, and highly aggressive about defending its young. They are a common sight in temperate and colder climates around the globe.

The English word “swan” is also shared with the German and Dutch. It likely has its roots in the older Indo-European word swen, which means to sound or to sing.

This bird is much faster on land than you might suspect with speeds of 22 miles an hour. In the water, it can also achieve speeds of around 1.6 miles per hour by paddling its webbed feet. But if they stretch out their wings, then swans can let the wind carry them at much higher speeds while also saving energy.

These birds feature prominently in human mythologies and arts around the world. Some of the most famous stories involve metamorphosis and transformation. A Greek legend claims that the god Zeus once disguised himself as a swan. The famous 19th century Tchaikovsky ballet Swan Lake, which derived from Russian and German folk tales, is the story of a princess transformed into a swan by a curse. And of course, the Hans Christian Andersen fairy tale The Ugly Duckling is about a duck that transforms into a swan.

Swimming gracefully through the water, these birds are an impressive spectacle whose characteristics include a large body, a long and curved neck, and big feet. Each species has different colored plumage. The common mute swan is almost completely covered in white feathers except for an orange bill and some black markings on the face.

Among these birds’ most remarkable social characteristics are the intense bonds they form with one mate for life. Unlike many other species of birds (even the closely related geese and duck), this has a few distinct advantages. First, it allows the pair to learn from their reproductive failures and develop better strategies. Second, the couple will share several duties, including the construction of nests, which they build out of grasses, branches, reeds, and other vegetation. This makes them far more effective than it would be on its own. Third, because of their long migratory routes, they have less time to acquire a mate, so the lifelong bond actually saves them time.

These birds are quite defensive animals that will do anything to protect their young. To drive off threats, they will engage in a display called busking, which involves hissing, snorting, and flapping with their outstretched wings. Due to their relatively weak bones, this display is largely a bluff that has little force behind it, but it doesn’t stop them from gloating. After driving off a predator, they make a triumphant sound. They also communicate through a variety of other vocalizations that emanate from the windpipe or the breastbone, including in some species a geese like honk. Even the so-called mute swan can make hissing, snoring, or grunting sounds.

After the breeding season, the bird migrates to warmer climates in the winter by flying in diagonal V formations with around 100 individuals. When the lead bird tires, another one takes its place at the front. These birds can be either partially migratory or wholly migratory depending on where they nest. The fully migratory species typically live in colder climates and may travel the same route thousands of miles every year toward warmer climates.

These birds are endemic to ponds, lakes, rivers, estuaries, and wetlands all over the world. Most species prefer temperate or Arctic climates and migrate during the colder seasons. The common mute swan is native to Europe. It was later introduced into North America (where it flourished).

Swans are omnivores, meaning they eat both plants and other animals. When swimming in the water, it feeds via a method called dabbling in which it flips upside down and reaches down with its long neck to the vegetation at the bottom of the floor. The bird can also come up onto land in search of food.

These bird’s large size, fast speeds, flying ability, and rather aggressive behavior (at least when threatened) are a deterrent for most predators, but the old, ill, and young (especially the eggs) are sometimes preyed upon by foxes, raccoons, wolves, and other carnivorous mammals. Habitat loss, pollution, and overhunting have all posed a persistent threat, but they can adapt quite well to human habitations, and the cultivation of ponds and lakes for local wildlife has kept population numbers high. In the future, swan habitat and migratory patterns will be affected by climate change.

Thanks to years of protection, the swan genus as a whole are in excellent health. According to the IUCN Red List, which tracks the population status of many animals around the world, every single species of the swan is listed as least concern, which is the best possible conservation prognosis. Population numbers, though not known with precise accuracy, appear to be stable or increasing around the world. The trumpeter swan endemic to North America once fell to as little as 100 birds in 1935, but it has since been rehabilitated.

Swans have symbolized different things to different people. They were a symbol of religious piety in ancient Greece. They were revered for their purity and saintliness in Hinduism. And because of their lifelong bonds, they’ve also symbolized love and devotion around the world.

The common phrase “swan song,” which means a mournful call at the moment of the swan’s death, appears to be a myth. It is still regularly used in modern English to signify a final graceful exit, but the origin of this belief is not well understood. According to the author Jeremy Mynott, who wrote a book about birds in the ancient world, the phrase might have to do with the swan’s connection to Apollo, the god of prophecy and music. The philosopher Plato believed that the swan song was a “metaphorical celebration of the life to come.” Rather than bewailing their own deaths, Plato writes, the swans are “happy in the knowledge that they are departing this life to join the god they serve.” Other ancient authors were skeptical of the swan song and sought to debunk it. More recently, some scientists have tried to find a more rational and scientific explanation for this belief, but more likely it’s based entirely on symbolism and myth.

Despite their intense devotion to each other, swans do not die from grief. This appears to be a myth derived from a dubious ancient source. If a mate dies prematurely, then the surviving swan will usually find a new mate. What they feel after a mate dies is not entirely clear, since we cannot know fully what they are thinking.

Which shortstop’s league-leading 209 hits helped him win the 1997 rookie of the year award?