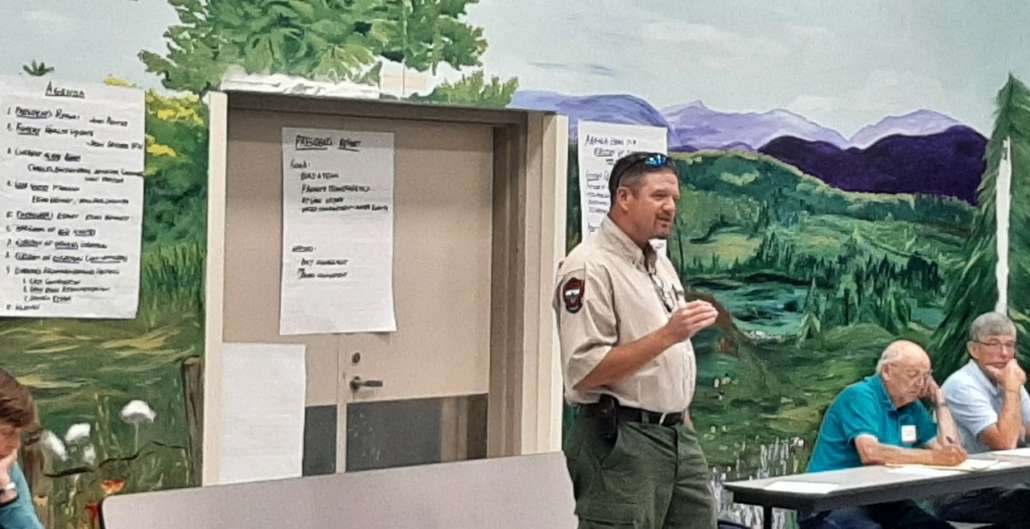 Jason Seiders, a marine biologist with the state explains the cause of the early summer fish kill on Webber Pond. (photo courtesy of Scott Pierz)

By a split vote, members in attendance at the Webber Pond Association annual meeting passed the new, revised bylaws, as was recommended by the board of directors.

Highlights of the revised bylaws include the establishment of proxy voting, the forming of a water quality and water level management committee, adjustment in membership requirements, disqualification and termination criteria for directors and officers, and an indemnification clause.

The subject of proxy voting received the most discussion and was the most controversial item in the revised bylaws. The article would allow a member in good standing to present no more than two proxy votes for members in good standing who are unable to attend the annual meeting for various reasons. The person unable to attend the meeting would have to submit a form delegating their vote to someone else.

The dues structure was altered from the old practice of a $25 membership allowed two members of a household to cast votes at the annual meeting. That was adjusted to individual memberships of $25 per person, eliminating the two-for-one practice.

The revised bylaws created a water quality and water level management committee that would oversee the dam and determine when a mini-flush and the annual drawdown would take place.

This committee would determine if, and when, a mini flush was necessary, and set the date for the annual drawdown. All decisions would be made according to the most recent scientific data regarding the water quality with Secchi disk readings, phosphorus levels as determined by the state with lab testing of phosphorus levels in the pond, the water level – taking into consideration the level of the water at the spillway – and projected weather conditions. This would eliminate the annual vote for the drawdown which was always a contentious subject. The annual drawdown would be set for the second Monday following Labor Day, taking in all the data as described above.

That would be followed by replacing the gates in the dam two weeks following the drawdown, or around the beginning of October. The winter level would be set in November, to allow the pond to refill before ice in.

The indemnification clause would not hold board members and officers liable for lawsuits in the case of accidents at the dam. The dam has seen some vandalism in recent years.

At the beginning of the meeting, WPA President John Reuthe introduced Jason Seiders, a marine biologist with the state of Maine, who spoke on the fish kill that occurred earlier this summer.

Seiders noted that it is not unusual to have such a fish kill among adult largemouth bass in lakes with similar conditions as Webber Pond. He cited that a similar kill occurred at Three Mile Pond before Webber’s.

He noted that largemouth bass are not native to northern New England, and that they are at the northern end of their range. Following the fish kill, dead fish were taken and examined. What was first believed to be a fungus, turns out to be a parasite to which the skin cells of the fish reacted.

He explained that those types of fish kills usually happen right after ice out, especially at the time of spawning, when adult largemouth bass are stressed and more susceptible to parasites. Although Webber Pond is described by the state as a “bass factory,” it could take four to five years for the fishery to recover.

“These readings are significantly lower than we normally see at this time of the year,” he said. In fact, the 1.38 reading was the second lowest reading since collecting data began in 2005.

According to Susan Bacon, at the DEP, the May fish kill was a result of a parasite, and suspects it had very little to do with the algae, despite dead fish slowly adding to the nutrient load. Hot July weather more than likely had something to do with it, as the water temperature spiked, resulting in the internal recycling kicking in at a slightly different time than usual, promoting growth of a different species.

High winds were also a factor in the algae bloom. Wind gusts of up to 35 miles per hour on two different days during the first two weeks of July contributed. Heavy wind kicks up phosphorus from shallow areas of the lake, providing more feed, and also adds oxygen to the lake, which allows the algae to live in deeper waters.

In other business, the membership passed, with two dissenting votes, to contribute $1,500 to the China Region Lakes Alliance.