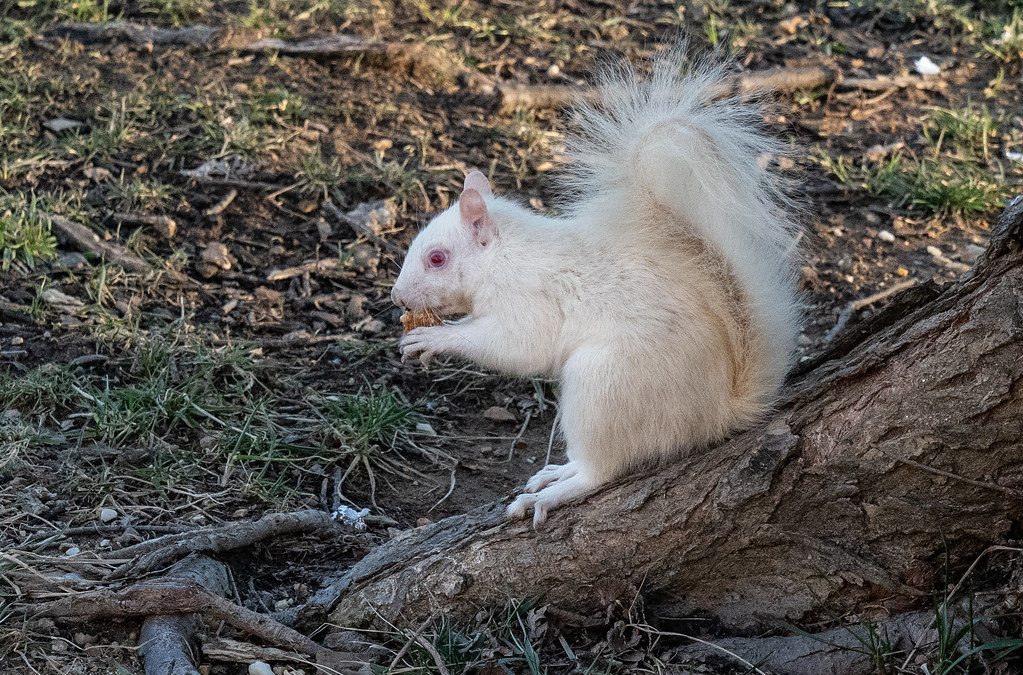 I ran into an acquaintance at a local supermarket last week, and he commented on my articles on black squirrels, and told me he had heard that a reported albino squirrel had been spotted in the central Maine area.

First, is there a difference between an albino squirrel and white squirrel?

There is, in fact, one true squirrel for which a white coat seems to be a characteristic of the entire species, at least in parts of its range. Its an Oriental Tree Squirrel found in Thailand and other parts of South East Asia. Another belongs to a yet undescribed species recently found on Palawan Island, in the Philippines, and thought to be endangered. So if you sighted a white squirrel here in North America outside of captivity, its almost certainly a color variant of one of our native species.

But, let’s talk about local squirrels.

Squirrel coats have a wide variation in color. There is much variation in squirrel coat color both locally and regionally. The general pattern of brown/gray on top and white below (counter shading) is considered the wild type from which other variations arose.

White Squirrels are just another color variant of this variable species. The most common sightings of white squirrels are of isolated individuals with a completely white coat but dark eyes. This variant appears to spring up sporadically all over the species’ range and then dies out, only to pop up again somewhere else.

Still rarer seems to be the type of coat pattern we hear about in Brevard, North Carolina. The coat is mostly white but there is a distinctive head patch and dorsal stripe that broadens in the shoulder region. The head patch can be solid, horseshoe or doughnut shaped; it may resemble a triangle, a diamond, deer tracks or even a widow’s peak (Count Dracula). There is some evidence that this pattern is inherited. Although there is much variation in the amount of pigmentation, these white squirrels definitely can produce melanin (a brownish-black pigment found in skin and hair in animal tissues), not just in the eyes but in hair cells as well. The region of white hair, normally restricted to the abdo­men in a gray squi­rrel, is expanded at the expense of pigmented regions.
Albino squirrels can’t produce melanin.

In addition to the white coat color, another variant in the Eastern Gray Squirrel can be found.

One additional variant should probably be mentioned here. Its not uncommon to observe a tan, ochre, or “blond” Eastern Gray Squirrel. This condition is thought to occur when the black/brown color is “diluted” by a preponderance of a yellow/red color. The color coat is not a factor when squirrels mate. Mating between coat color variants is probably random or non-assortative. Coat color is not nearly as much a factor as hormonal attraction. Squirrels have two breeding seasons per year, one in winter and one in summer; within those periods, each mature female will enter estrus on a different day but only for that one day. When a female enters estrus, interested males come from hundreds of yards away and camp out at her “door step” (outside her nest) before dawn without ever seeing her coat color. Most accounts of “courtship”, itself, are brutal with little opportunity for females to be selective by any means, let alone coat color. Fortunately for her, she is only “receptive” and pursued by males for that one day during each breeding period. During that time, she may be impregnated by several different males, none of which help raise the young. That is one reason piecing together the genetics of coat color variation in squirrels is so difficult.

For many of us the existence of a white squirrel is difficult to imagine, but it is not as uncommon as you may think! Populations of white squirrels can be found in places across the United States and sightings of these mystical creatures are becoming more common. There are over 200 species of squirrels and only one subspecies is found to have white as a primary color morph!

The easiest way to know if the white squirrel you spotted is albino or a rare morph is by its eye color. Albino squirrels are completely white with red or pink eyes. This unique eye color is found in all albino animals and is a result of a lack of melanin​ pigments that produce eye and coat color. Albinism is a genetic condition caused by a recessive gene. This means that both the mom and dad squirrel have to be carriers of this gene in order to produce albino offspring. This is what makes it so rare! It is estimated that 20-30 percent of white squirrels in North America are albino.

The rare white morph of the eastern grey squirrel has black eyes and can have a mix of white and grey coat. Similar to albino squirrels, white eastern grey squirrels owe their unique coat color to their genes. But, unlike albino squirrels who have a mutation on the gene coding for pigmentation, western grey squirrels actually have a gene that codes for a white coat! Despite having this ‘white coat’ gene, it still only occurs very rarely because being so brightly colored makes a squirrel less able to blend in amongst the trees and thus more visible to predators.
​
Catching sight of these rare variations of squirrels is tough unless you know where to find them. There are five main cities that claim to be the official ‘home of the white squirrel’.

Traveling to one of these locations will greatly increase the success of your white squirrel sighting adventure!

In a map created by researcher Rob Nelson, and Roland Kays, a zoologist at North Carolina State University, shows two sightings of white squirrels in Maine, one in central Maine and the other DownEast – both identified as the white morph variety, and not albino.