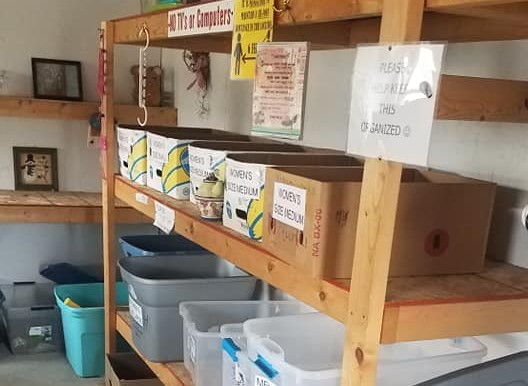 China selectmen agreed to two temporary closings at their Sept. 28 meeting, one their own doing and one not.

At the transfer station, the free for the taking building, sometimes called the swap shop, will be closed indefinitely, effective immediately. Reopening will depend on state guidelines concerning Covid-19 safety measures. Selectmen were concerned about the possibility of people leaving items carrying the virus and about the number of people in the building at the same time, even though it is well ventilated.

At the head of China Lake’s east basin, Causeway Street will be closed between the China Baptist Church parking lot and the boat landing, beginning the week of Oct. 12 and lasting for eight to 10 weeks. During the closure, McGee Construction will install protective shoreline barriers and a walkway along the north shore of the lake.

Another selectboard decision was to give the old roto phase at the transfer station to the Town of Vassalboro, with Vassalboro employees to come and get it. Town Manager Becky Hapgood said the roto phase is 25 to 30 years old, no longer needed in China and valued at a maximum of $200.

Asked what a roto phase is, Hapgood replied, “It’s something that does something with the power.”

Selectmen made two appointments. James Lane will become China’s second Animal Control Officer, so an ACO will be available when Kim Bolduc-Bartlett takes time off. Lane served in the past as China’s police officer.

Town Clerk Angela Nelson will be China’s agent for the state Bureau of Motor Vehicles, meaning she will handle vehicle registrations.

Hapgood announced that Codes Officer Bill Butler is retiring, effective Dec. 1. She planned to start advertising for a successor within days.

The Sept. 28 meeting was preceded by two public hearings. The first was the annual state-required hearing on state-recommended amendments to the appendices to the town’s General Assistance Ordinance. The second was on the two local ordinance amendments to be on the Nov. 3 ballot – they are posted under Elections on the China website, Hapgood said.

Neither hearing drew any public comments or questions. During the meeting selectmen unanimously approved the general assistance amendments.

The evening’s longest discussion was over Hapgood’s request for an early performance review, before Nov. 3 local elections bring in one or more new selectmen who have not worked with her. Appointed to succeed Dennis Heath in mid-July, Hapgood is on six-months’ probationary status, scheduled for review in January 2021.

“I want to know if I’m meeting the needs of the community, if I’m serving you well and taking care of what needs to be done,” Hapgood said.

After talking about the time between mid-July and the election, and the time between the election and mid-January, and when the following review would be due (Hapgood said normally employees’ reviews are done shortly before the June 30 end of the fiscal year), board members decided to wait until January.

Chairman Ronald Breton said any new selectman who thought he or she did not know Hapgood’s work well enough by January could decline to participate in the review. And meanwhile, he told Hapgood, any board member not satisfied with her job performance could tell her so individually.

China voters will elect three selectmen from a field of five on Nov. 3. Breton and Janet Preston seek re-election; three newcomers on the ballot are Blane Casey, Brent Chesley and Jeanne Marquis. Donna Mills-Stevens is not running for another term; Irene Belanger’s and Wayne Chadwick’s terms end in 2021.

The next China selectmen’s meeting should be Monday, Oct. 12, but was rescheduled to Tuesday, Oct. 13, to avoid the Columbus Day holiday. The next regular planning board meeting is scheduled the same evening. Breton said he and Planning Board Chairman Tom Miragliuolo will resolve the conflict.