I’m going to begin this new series by taking a look at the 1947 Plymouth Deluxe.

Well, to begin with, that was the year I was born. It is also the first car I remember being owned by my dad – he bought it used. I can still see it, with its splashing gray color, sitting in the garage. 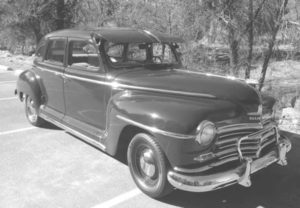 lymouth from 1946-1950. It came in two trim levels, the Deluxe and the top-of-the-line Special Deluxe. As the war in Europe wound down, the U.S. government slowly began allowing the automobile industry to return to the car-making business. It had been four years since any new cars had been built, and those cars still on the road were beginning to show their age. “The more you know about the new Plymouth… the more convinced you are that not all the beauty is on the surface. You can’t see them all, but you can feel them in action,” was the advertising push.

Plymouth’s new models for 1946 were once again offered in two series, the P15S Deluxe and P15C Special Deluxe. Deluxe body styles included a four-door sedan, two-door sedan, club coupe, and business coupe. Special Deluxes added a convertible coupe and wood-body station wagon to the line-up. Waiting lists were common at dealerships. Those wanting a new car placed their name, and often a cash deposit, with the dealer. Customers hoped that as new cars became available, they would move up the list until it was their turn to take delivery. Car buyers with their name on every dealer’s list in town were not uncommon; reports of money paid under the table were common, as were scalpers who would put their new car on the market at a price considerably higher than they had paid for it.

The first post-war Plymouth, a P15S Deluxe, came off the line October 22, 1945 (Ironically, October 22 is also my birthday). Special Deluxes would follow four days later. Bodies for the P15 Plymouths were virtually unchanged from 1942, with only minor trim differences. “Engineering magic greets you right from the start. You don’t grope for a starter button or pedal. You don’t pull on a choke. You simply turn the ignition key – and the engine starts,” said the advertising brochure.

Plymouth literature claimed 50 improvements over the pre-war cars; many were of little significance but were changes nonetheless. Mechanically there were few changes. The 217 cubic inch engine stayed the same and was still rated at 95 horsepower, attained at 3,600 rpm instead of 3,400 rpm. An economy engine package using a smaller intake manifold and carburetor with one-inch bore returned to the option list. Aluminum pistons replaced the cast iron ones that had been mandated during the war. Like many vendors, Carter couldn’t supply enough of their model D6G 1 carburetors to meet Plymouth’s production demands; Stromberg, which normally supplied Ford, provided its model 3-84 carburetor. Replacing the disposable oil filter was a new cleanable canister that contained a replacement cartridge. “Outside and in, it’s a completely new Plymouth. Compare it feature for feature. Sit in it.

Ride in it. Drive it. Then you’ll surely agree,” continued their sales pitch.

I don’t quite remember how long my dad had that Plymouth, but his track record was three years. I do remember though that his next car, for whatever reason, was a 1950 Mercury. From that point on, my dad went strictly General Motors.