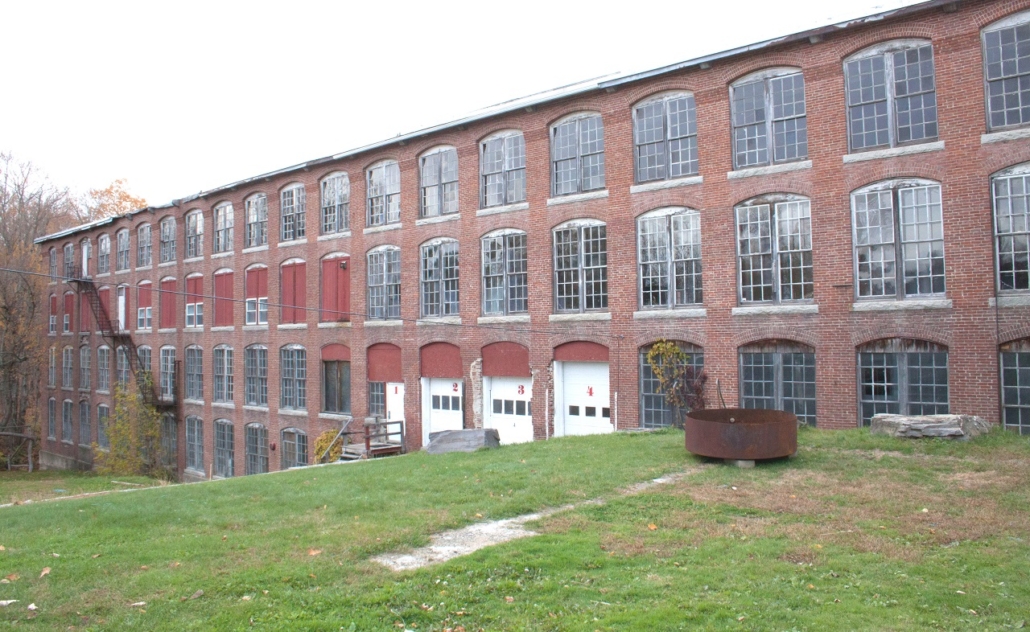 Building Two of the Olde Mill on Main Street in Vassalboro. (photo by Sandy Isaac)

When asked, “What do you like most about the mill?” Ray Breton was not able to answer. In fact, he looked at me like I was crazy.

“The architecture, the history, the old writing on the windowsills. The Mill was the center of town for so many years, and still is. We have weddings and birthday parties, flea markets and craft fairs. Being around all the people, watching them have fun and smiling at these events…it’s all my favorite.” It’s safe to say that Ray Breton loves this Mill, and with all this activity, both physical and spiritual, you can understand why. 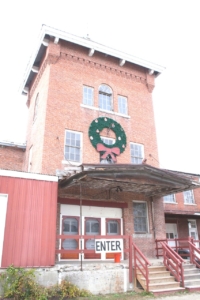 “The Tower” at the Olde Mill. (photo by Sandy Isaac)

The Olde Mill, located on Main Street, in Vassalboro, was originally called the American Woolen Mill. It was built in approximately 1850 with wings added for each year that coincided with a war: 1850, 1917 and 1943. It was the largest mill in New England. At the height of production, the mill employed over 500 people and won awards for the cashmere that it produced. At one point it housed an actual steam engine that helped power the equipment. The steam engine currently located in Owls Head Transportation Museum is said to be identical in size to the one used in the mill.

The mill ceased operations in 1955, displacing 400 employees. The mill continued to remain active with various companies, such as the Ladd Paper Company and Kenne­bec Bean Company, purchasing parts of the mill to house their own products. Over 15 other companies, including Midstate Machine and Duratherm Windows, started their businesses in the mill before moving into their own facilities. Other companies, including Marden’s and John Julia, called this Olde Mill home at one time or another.

During the hurricane force rain and wind storm in October 2017, the roof sustained heavy damage. Wind gusts hit the south side of Building One and peeled the front edge of the roof up. Building Two lost over 90 percent of the roofing, including fascia boards and decking. Afterwards, they were able to lay tarps down, but tarps are only made for temporary use and have to be replaced. They have sealed up the areas that they can, but with every storm, they have to chase the leaks, dump endless buckets of water and recover interior surfaces with poly-plastic covers and tape. The estimated cost to repair the roof ranges from $300,000 – $400,000, and increases as time passes. Despite all of the damage, the mill remains very active, and we’re not just talking about ghosts. Recently, the mill hosted Parafest Maine, a convention of sorts for paranormal and unexplained phenomena. Hundreds attended the event on October 11 and 12, which offered talks by professionals and vendors selling everything from T-shirts and books to equipment used for paranormal research. Some participants even braved staying overnight at the Olde Mill for a guided ghost hunt.

During the late night hours, those who bought tickets were split up into groups and sent to different areas throughout the mill. They set up to do research, record information and find evidence of ghosts.

One group used a “spirit box,” a type of radio scanner that allows intelligent energies to utilize radio frequencies to communicate. Members of the group ask questions and receive answers in the form of random words that come over the radio air waves. Photos are taken in a series of three consecutive shots in hopes that one of the photos would show a ghostly image. Electromagnetic frequencies or EMF(s) are also monitored. Spikes in EMF can mean anything from a water source, an electrical source, or another form of energy. During investigations, researchers ask questions to provoke a response. When the monitors spike after a question is asked, it is guessed to be caused by an intelligent energy source.

Many recorded the investigations with video or mini voice recorders. Each recorded session is reviewed for electronic voice phenomena or EVPs. EVPs occur when voices are recorded that are normally not heard during an investigation. Often times the recordings are reviewed later using audio software which separates evidence recorded from the background noise and investigators talking. The results are out of this world…literally. Answers come through to questions asked, often stating names, number of people present, or letting listeners know how they passed away. If you were skeptical before, you won’t be after spending an evening in the mill.

Mill owner Ray Breton has a huge amount of history and resources on events and happenings at the mill. Often, he is able to confirm evidence collected during the investigations. For example, if the name of an employee who passed while working at the mill happens to come through during an investigation, more than likely Breton has information on that person. 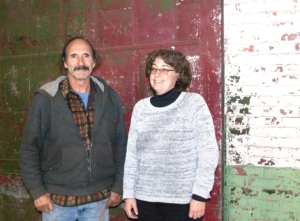 In addition to Parafest, the Mill houses a plethora of other activities, including an indoor yard sale (with all items donated and proceeds go towards the mill), The Clothing Closet (providing items for those in need), an art studio, an indoor baseball and softball training area, an indoor mountain bike course, the Olde Mill Place shops, as well as warehousing items for people. The mill also hosts Halloween events where over 1,300 people come through. Other town-wide events include Vassalboro Days, rubber duck races, community Christmas tree lighting, equipment swap events, fishing derbies, Spring celebrations, and more. Wedding, birthdays, celebration of life events, anniversaries and retirement parties all happen at the Mill year round.

In an effort to continue accommodating all these activities, Breton and (as he puts it) his “super volunteer” Samantha Lessard, work tirelessly on these and other ways to raise money for the roof repair. Lessard helps Brenton schedule outside events, runs The Clothing Closet and Indoor Yard Sale, and is a member of the event committee, which helps to decide on fundraising events for the mill.

Breton is currently working on the paperwork – and there is a lot of paperwork – for the Olde Mill to be considered an historical landmark. They are hoping once this qualification comes through, it will enable Breton to file for grants and other moneys to help with the roof repair efforts. To this date, a little over $45,000 has been raised for the roof, a far cry from the $400,000 mark needed. Breton is not discouraged. Many groups still want to come and be part of the mill and are willing to donate some proceeds to the repair efforts, especially the ghost investigator groups. After all, everyone wants to talk to “the Captain.” 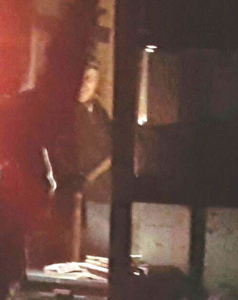 The “Captain?” The Captain can be seen in many photos, psychic sketches and recorded sessions. This photo was taken by Wendy McCusker, of Lincolnville, in 2006. The Maine Adult Education program offered a ghost hunting class taught by K&L Soul Searchers. As part of the class, they spent an evening at the mill where McCusker captured the image. In the photo, you can see a man wearing a cap, half in the shadows and standing on a staircase. There were no other members of the class in that vicinity at the time. This image was captured in the basement of Building Two.

One of the most famous people that often comes through during an investigation is “The Captain,” a seafaring spirit that seems to favor Breton and protecting children. The Captain can be seen in many photos, psychic sketches and recorded sessions.

Breton has been collecting documentation on all the ghost investigations that have come through the mill. At times, Breton has allowed certain groups to investigate his own home across the street from the mill, the Mill Agent House. Breton has had psychics, school groups, professional paranormal investigators and spiritualists alike come through, and often times groups have come back with results. He has copies of photos, recordings, drawings, etc., from many of the visitors, all of whom he requests to sign a guest book. To date, he has over 2,500 signatures in that book.

None of the community or family events are ever marred by the spiritual presences that lurk in the mill. In fact, Breton and Lessard think the spirits may even enjoy the laughter and fun that come from the merry occasions

If you happen to come out for one of Breton’s historic talks, afterwards, you might be brave enough to partake in a paranormal investigation. Maybe ask the Captain for a hello. You won’t be disappointed!

Breton truly loves the mill, and it’s safe to say, the mill loves Breton back. The mill continues to be the center of this town and with the efforts that are being made, it will hopefully come back to its full glory.

For more information on upcoming events at the mill, check out the Vassalboro Community Events and Announcement page on Facebook. If you are interested in helping out the mill with donations of either money, materials or skilled labor, please contact Samantha Lessard at 207-314-4940 or through email at samanthalessard@yahoo.com.

Please check out this video of the work being done on the Olde Mill: