Your writer hopes readers are ready for a change from Romanesque Revival and Hallowell granite, because the coming weeks of Kennebec Valley history will not focus on buildings, though they will continue to appear.

The Register of Historic Places for the central Kennebec Valley includes a farm and two farmsteads – a small number, considering the importance of agriculture in residents’ lives since the earliest settlement. They are the Hussey-Littlefield Farm, in Albion, the Colcord Farmstead, in Benton, and the Edmund and Rachel Clark Homestead, in China.

Please note that all three are privately owned. The owners’ rights and privacy are to be respected.

The application for National Register status for the Hussey-Littlefield farm was prepared in October 2015 by Architectural Historian Christi A. Mitchell, of the Maine Historic Preservation Commission. Mitchell says Silas Hussey, one of several Husseys prominent in the early history of Albion, settled at what became 63 Hussey Road, on the west side of the road that runs from Route 202, in Albion village, south into Palermo.

Hussey occupied the property in 1838 and acquired ownership in 1844. In or soon after 1838, he built a two-and-a-half story house facing the road, with a rear ell. The style is described as late Greek Revival and Italianate. South of the house he built a separate barn.

In the 1850s or early 1860s, Silas Hussey’s son, Burt, built another ell on the south side; Mitchell wrote it made space for “a summer kitchen and woodshed.” Later, Burt Hussey added a wagon shed that he attached to the barn.

The result is what Wikipedia calls a “connected homestead [that] exhibits the evolutionary changes of rural agricultural architecture in 19th-century Maine.” Mitchell calls it “an excellent example of a New England farm complex.” In an earlier application for the Colcord Farmstead in Benton (see below), she had written in more detail about the development of interconnected farm buildings in the second half of the 19th century.

The Hussey buildings are wooden, with clapboards or shingles on the outside. Mitchell wrote that the house foundations are granite except for fieldstone on the west. The rear ell has a fieldstone and brick foundation.

The house originally had two chimneys. The wide front door, its sidelights covered by 2015, is centered between two pairs of windows. It is sheltered by what Mitchell calls a Queen Anne style porch, open, wooden-floored, with “delicate, scroll-cut bracketed…supports” protecting it.

The side ell has a basement, entered from the west (back) side. The wagon shed’s early doors were also on the west, according to a 1936 photograph Mitchell describes; by 2015 it had garage doors on the road side.

The barn is two-and-a-half stories plus a cupola. Mitchell calls it a bank barn; the front is at ground level on a fieldstone foundation, but as the ground slopes downward to the west, most of the building is supported on cement piers. In 2015 Mitchell took interior photographs showing wooden stalls with a hayloft above.

Mitchell found records showing how the size and use of the farm changed through the years. It is listed on the Historic Register as including 6.8 acres of land in 2015; town records showed 114 acres in 1857 and 1858. Mitchell wrote that part of the land was on the east side of Hussey Road.

Her summary of farm products shows that apples dominated for many years. In 1880, the farm had 215 apple trees. She mentions in 2015 remains of an old orchard with Wolf River and Northern Spy varieties, plus a newer orchard with Northern Spies and semi-dwarf Cortlands.

Burt Hussey inherited the farm when his father died in 1894. Burt sold it in 1900 to his brother, John W., who died in 1910. John’s widow, Fannie, and son, Clarence, kept the farm until 1935, when they sold to brothers George and Harold Littlefield, who grew up on an adjoining farm. The Littlefields ran a dairy operation until about 1950, Mitchell wrote. George Littlefield’s son was the owner in 2015.

Of the three farms, the Hussey-Littlefield farm is the newest addition to the National Register of Historic Places, listed on Jan. 12, 2016.

The earliest listed of the three, and the subject of another of Mitchell’s applications, is the Colcord Farmstead, now Longmeadows Farm, at 184 Unity Road (Route 139) in Benton. It was added on Dec. 29, 2005, recognized as “a resource that provides an excellent source for understanding over 100 years of architectural and landscape design within an agricultural context.”

The Colcord Farmstead history goes back to 1786, when Captain Andrew Richardson, Esquire, bought from the Kennebec Proprietors a piece of land on the east side of the Sebasticook River. The property has been farmed ever since, under at least 13 different owners; the Colcord Farmstead has been called the Richardson Homestead; the Moses Stacy Farm; and now Longmeadows Farm.

After Moses Stacy died in 1867, his widow, Olive Pratt Stacy, hired men to run the farm, including Fairfield native John B. Colcord. In 1870, Colcord bought the farm from her for less than $1,100. He is responsible for most of the buildings that add to its historic value.

The farm remained in the Colcord family until 1926, when Colcord’s widowed daughter-in-law, Dorothy Burgess Colcord, sold it to Mary Louise Shink, who went bankrupt in 1937. Her creditors sold it to businessman Charles Orman Brown. Charles Orman Brown chose the name Longmeadows Farm; the fourth generation of his family now owns and operates it.

The Colcord Farmstead historic preservation listing covers 194 acres, about 20 acres between the river and the road and the rest, including a managed woodlot, on the east side of the road.

The L-shaped two-story farmhouse, with its one-and-a-half story ell with an open porch across the front, is on the west side of the road, with its back to the river. Mitchell quotes the Browns as saying it is the third house on the site; John Colcord built it in 1882. Mitchell describes the style as Italianate.

Attached to the ell on the north is what Mitchell calls a shed. She says the single-story building was built before the house; Colcord incorporated it. In 2005 there was a privy in one corner.

Attached to the shed is what Mitchell calls a shop, in Colcord’s day a stable and, Mitchell wrote, originally a center-chimney house. Two stories high, it was built around 1800-1810; Colcord apparently moved it about 60 feet and took out the chimney and the partitions between rooms.

The final attached building on the north is an equipment shed that Mitchell dates to 1899, after a previous shed burned.

The Kennebec County history includes a picture of the farm as it was in 1892. There were then two large detached barns north of the other buildings. Mitchell surmises they were there when Colcord bought the property, and says they burned with the first equipment shed, sometime before 1896.

About three feet north of the newer equipment shed, and set slightly farther back from the road, is a large three-and-a-half story bank barn, also built in 1899, with an exterior feed rack for cattle on the west (back) side. The open area under the barn, where it is supported on posts, provided shelter for cattle, Mitchell wrote. The Browns added a milk house east of and connected to the barn in 1937.

South of the house and its attached outbuildings, a seasonal stream runs into the Sebasticook River. The 2005 application lists a steel windmill on the river at the mouth of the stream, built early in the 20th century to pump water into the water tank on the second floor of the 1899 barn; and a sawmill, built around 1950, just south of the stream, to help manage the farm’s forestland and provide building materials.

Owners of the Hussey-Littlefield Farm 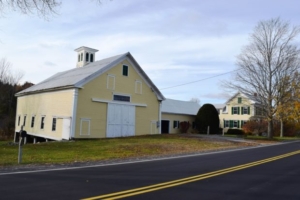 John W. Hussey married twice. He had two daughters by his first wife, Mary Keay Crosby, of Albion, who died Feb. 28, 1888. Around 1889 he married Francena “Fanny” (or Fannie) Goodspeed; their only child was Clarence Wellington Hussey, born Oct. 28, 1892. The genealogical record says Francena and Clarence lived until after 1930.

Significant owners of the Colcord Farmstead 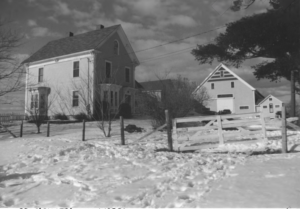 Andrew Richardson was born in Townsend, Massachusetts, on Aug. 25, 1760. In April 1775, when he was not yet 15 years old, he and three older brothers joined the Revolutionary Army, in Cambridge, Massachusetts, and fought in the June 17, 1775, battle of Bunker Hill.

After two years in the army, Richardson moved to the part of Maine that was then Hancock Plantation and became in 1850 Benton (see The Town Line, April 2, 2020, for a brief history). In 1781 he married Hannah Grant of Frankfort; she died in January 1811.

Richardson is described as a “leading citizen” who captained the local militia, served as a selectman for many years and in 1809 and 1810 represented what was then Clinton in the Massachusetts General Court. He died Jan. 10, 1818.

Robert and Katharine Brown had a son, Mark. The Longmeadows Farm website says Mark and Connie Brown lived there for more than 40 years and Mark Brown and his son Alexander, “Xandy”, Brown run the farm, specializing in beef cattle.

Next: the Edmund and Rachel Clark Homestead in China and other agricultural information.