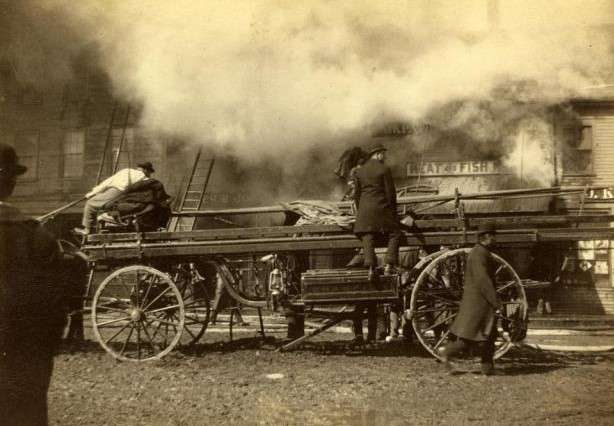 James North’s history of Augusta ends in the year 1870; 19th-century Augusta fires did not. Your writer has relied for later firefighting information on the University of Maine’s on-line DigitalCommons collection, mentioned last week, and on-line Augusta histories.

Charles W. Ricker was Augusta’s chief engineer for more than a decade, starting in 1893. In the city’s annual report for the fiscal years that ended March 1, 1894, Mayor Charles A. Milliken wrote: “I think politics should be eliminated from this department. The present chief engineer is a competent man and I think should be retained.”

Ricker, in his first report (March 21, 1893, to March 1, 1894), wrote that, “in the history of the Department we have never answered so many alarms [43, he wrote in the next paragraph] with so little loss of property, and at no time have we been in such a flourishing condition as regards membership and efficiency.”

One of the fires caused a death: early in the morning of Oct. 1, 1893, “matches in bed clothes” started a fire that killed Mary Scanlan, wife of James Scanlan, living in John Welch’s house, on Court Street.

The damage from these seven fires was completely covered by insurance, except Smith’s plate glass.

An article in the March 8, 1894, edition of the Daily Kennebec Journal referred to and expanded on Ricker’s report. It began, “This city has one of the best fire departments in the State. Only a few minutes after the alarm sounds the firemen are always to be found where the fire is.”

The 75 men were divided into six companies, based on Bridge Street (Cushnoc No. 1 engine), Cony Street (Atlantic No. 2), Cushnoc Heights (Volunteer No. 3), Pettingill’s (sometimes spelled Pettengill’s) Corner (Pine Tree No. 4), State Street (Capital No. 5) and “foot of Cony Street” (Hook and Ladder No. 1).

The hook and ladder company had “one Bangor extension ladder, several roof ladders, and others for general climbing.”

Considered volunteers, the 15 hook and ladder men got $20 a year apiece. Everyone else got $25, apparently, except that each company’s officers – foreman, assistant foreman and clerk – were paid from $35 to $45, depending on rank. And, “Any company called from its district is paid 40 cents extra per hour.”

The writer commented that the pay was small for the work and risk involved. He wrote of Ricker that after more than 12 years with the department, he “is not only experienced in fighting fires, but possesses good judgment.”

The department had nine hose carriages with about 6,300 feet of hose. There were 89 fire hydrants in Augusta.

In his second annual report in March 1895, Ricker listed 30 alarms since April 1894, with descriptions and damage estimates. This and future reports listed the department’s equipment, buildings and manpower; the city’s reservoirs; the fire hydrants and fire alarm boxes; and recommended improvements. The 1894-95 report included commendations to firefighters for “the utmost goodwill and harmony” and cooperation among different companies. 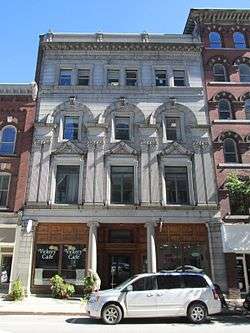 The second major fire was reported at 1:30 a.m. on Dec. 11 at “City Farm,” via the fire alarm box at the corner of Bridge and Spring streets. Ricker reported, “Two stables burned with contents,” which included “two cows, one bull, six hogs, fifty tons of hay and straw, farming tools.” The cause was listed as “boy setting fire to hay in the stable.”

The report listed one fire death. On Feb. 2, 1895, a lamp exploded in A. O. Bailey’s house on Patterson Street; the resulting fire killed Mrs. Bailey.

Ricker mentioned his two assistant engineers and “steamer engineer.” The latter, he explained, took care of Cushnoc No. 1, the steam fire engine, and also “repairs all the damaged hose.”

In March 1897 Mayor W. S. Choate’s end-of-fiscal-year report for 1896-1897 included this comment: “Promptness and efficiency have characterized the work of this [fire] department during the past year. The burning of the Opera House on the night of July 3-4 being the only serious fire during the year, and the extent of this cannot in any way be attributed to any lack of good service on the part of this department.”

The Opera House stood at 296 Water Street. It was the second building at that address to burn in the 1890s, according to on-line sites.

James North wrote in his Augusta history that the earlier building, called Granite Block, was built starting in the summer of 1865. Granite Block had stores on the ground floor and offices on the second floor. The third floor was a large auditorium with a stage and galleries, named Granite Hall.

A gala opening was held March 7, 1866. The building burned in the winter of 1890, “leaving only the four granite walls standing.”

According to this source, the July 3, 1896, fire was started by firecrackers, “in the rear of a sub-passageway” in the building. In addition to the “fine Opera House,” the fire destroyed second-floor “city government and city treasurer’s rooms and offices” (with more than $8,000 worth of furniture, insured, the city report added), and on the ground floor “the store of E. W. Church, grocer; Augusta Deposit and Trust Company, café, and Charles K. Partridge, druggist.”

Volume 16, Issue 4, of the Vermont Medical Monthly includes notice of the death of Dr. James E. Tuell, of Augusta, on Feb. 11, 1910, at the age of 55. The article says he graduated from Jefferson Medical College (now Sidney Kimmel Medical Center at Thomas Jefferson University in Philadelphia) in 1884 and was a member of “the Kennebec County Medical Society, the Maine State Association and the American Medical Association.”

(The same journal article listed deaths of six other doctors with Vermont connections. Tuell lived the longest; the others died at ages ranging from 35 to 53.)

The second Opera House opened Sept. 7, 1900, “again using the original granite walls.” The building was used intermittently for movies and for live theater, until it closed in 1974. In 1983, the building was torn down –“following a fire.”

Ricker’s annual reports continued into the 20th century. In the year ending March 1, 1900, he said there were 35 alarms, including eight major fires and one false alarm. The earliest major fire was March 12, 1899, at a stable on Sewall Street: it killed three horses and did an estimated $941 worth of damage.

In April 1899 firefighters responded to four events Ricker thought worth mentioning. April 7, at 2:05 p.m., they went to a fire at the dump on Capitol Street; the same day, at 4:55 p.m., “rats and matches” started a fire on Bridge Street.

The most costly fire started at 11 p.m. on Aug. 31, at the Broom Handle Manufacturing Company. Damage was estimated at $1,000.

At the beginning of 1900, Ricker wrote, the department had five active engines at five stations, in addition to an old ladder truck and the Cushnoc Steamer. Numbers had replaced names for the engines; city horses pulled Hose and Ladder Combination 1, and L. G. Haskell was charging $1,100 a year for his team that pulled Hose #2.

A January 1904 article in Fire Engineering magazine, found on line, describes a Jan. 7, 1904, fire that destroyed two “large brick blocks” containing stores and a bank. The Whitman and Adams store sustained the largest loss, estimated at $60,000.

The Augusta department was assisted by men and equipment from Waterville, Gardiner and Hallowell; it took five hours to stop the fire. Ricker was “overcome by smoke, and several firemen were hurt by falling glass.”

The writer castigated the City of Augusta for inadequate attention to fire prevention. He described the city’s “fire area” as 1,290 acres, filled with wooden houses and commercial buildings up to seven stories tall.

The volunteer fire department had 69 members; it owned 11 pieces of mobile equipment (including one “hook and ladder truck—not aerial”) and 10 “hand chemical extinguishers.” Of the 9,000 feet of hose, 7,000 were rated “good.”

However, there were only six horses, and no equipment in reserve.

The water source was the Kennebec River, whence water was pumped into reservoirs. The writer pointed out that the fire department was dependent on water pressure being maintained, which he said could not be guaranteed; and he reminded readers that hydrants freeze in cold weather.

“It is obvious, therefore, that for a city of the size of Augusta, with such an extensive fire area to cover and so many wooden buildings to protect, the fire department is very poorly equipped – that it is starved, in fact, and that, however efficient its members, it was out of the question for them to be expected to handle a fire of any magnitude, unless they had apparatus enough to do the work,” he wrote.

Recommendations included additional modern equipment and a few paid firefighters who would be constantly available. Augusta can afford a paid department, he opined, “under such an experienced firefighter as Chief C. W. Ricker, whose continued terms of office prove that he enjoys the confidence of his fellow citizens and the fire committee of the city council.”

Ricker’s 12th (and final) submission was for the annual report for the year that ended March 1, 1905. The city report for the year ending March 1, 1906, included no fire department report, nor did Mayor Frederick W. Plaisted name the chief engineer, by then paid $600. The mayor’s report included this sentence: “We have a loyal and efficient volunteer fire department; let us cordially support it and increase its efficiency.”