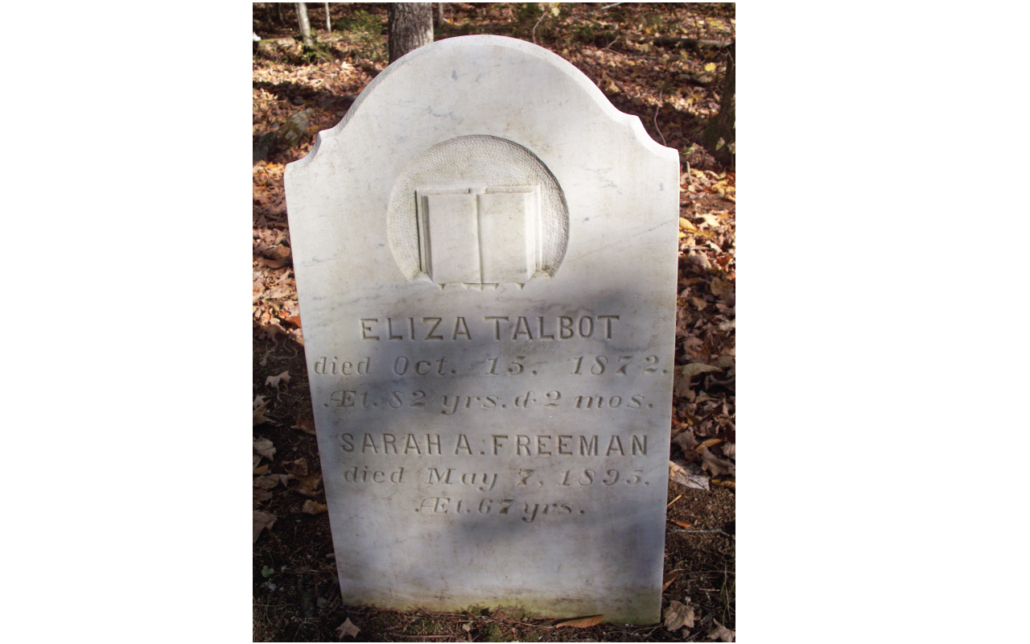 Headstone of Eliza Talbot and Sarah Freeman, in Talbot cemetery, in China.

So far, people in this history series have been almost entirely the group that is still Maine’s majority population: white people descended mostly from inhabitants of the British Isles, plus representatives of other northern and western European countries.

For example, Millard Howard wrote in his Palermo history that early settlers in that town came mostly from Massachusetts or New Hampshire, sometimes via coastal Maine. These settlers’ ancestors, he wrote, had usually been religious dissidents (Puritans especially) who emigrated from Great Britain in the 1630s.

This picture is incomplete. In addition to the Native Americans, who lived here for generations before Europeans arrived, the central Kennebec Valley has had a small Black population for almost as long as the Europeans have been here, and since the 19th century people from the Middle East and French Canada have created distinct minority cultures.

Readily available sources tend to provide only scanty information on these groups, and as readers will soon learn, what information is available is sometimes inconsistent.

An invaluable source on Blacks in Maine is H. H. Price and Gerald E. Talbot’s Maine’s Visible Black History: The First Chronicle of Its People, published in 2006.

(Gerald Talbot is a descendant of the Talbots who lived in the Town of China in the 19th century. He was the first Black member of the Maine legislature, and is the father of current House assistant majority leader Rachel Talbot Ross, of Portland.)

Price and Talbot found that China had 24 Black residents in 1820 (of a total population of 894); 15 were men and nine women. In 1830 there were six Black families (headed by Peter Freeman, Enock Jenkins, Calvin Jotham, Ambrose Sewall, John Sewall and Ezekiel Talbot), totaling 29 people.

Other records showed that Abram Talbot and Ezekiel Talbot lived in Gardiner before they moved to China “by the 1840s.” If Abram and Abraham are the same man (as seems likely, but not certain; records show Abraham Talbots in multiple generations in the family), he was born in 1756 and died in 1850.

Abraham Talbot is described as “a former slave who owned a brickyard on the east side of China Lake.”

His parents are identified in this and other sources as Abraham Talbot (May 27, 1756 – June 11, 1840) and Molley or Mary Dunbar (1758-1850); they married in Bridgewater, now part of Brockton, in September 1787. An on-line site says the couple appears to have moved to China before 1800, “as he is enumerated in a collective district for the 1800 federal census which included Three Mile Pond, areas east of Winslow, and Freetown Plantation [later Albion].”

This Abraham Talbot was a Revolutionary War veteran, and he was living in China when he applied for his veterans’ pension on April 18, 1818.

Abraham and Mary Talbot had eight children, according to an on-line family history. Their births are recorded in Fairfax (now Albion), indicating that they lived in the area that was added to the north end of present-day China in 1816 and 1818.

The reference to the 1800 census cited above says: “Due to his status as a free black, the census record only gives the number of persons in Abraham’s household, which totaled 6 persons. As the couple had six children born by 1799, it would appear that two of their children died at an early age.”

Abraham and Mary’s oldest son was Ezekiel (also called Eschiel Tarbet), who was born Dec. 21, 1787 (in Massachusetts, or Maine?), and died in China in 1879. The third son was Abraham, born Feb. 28, 1792; the website says he married Edith Griffin Freeman, in Gardiner, in 1818. He was buying land in Portland in the spring of 1847, in partnership with William Jones; the two are called “mariners.” There is no evidence that he returned to China; he “was buried on 25 January 1862, in Portland.”

The Ezekiel Talbot who was born in 1787 married Eliza or Elizabeth Seco (see below for more about the Seco family). He was a farmer and a landowner; on-line sources list records of land transfers.

One source says Ezekiel and Eliza had three sons (Abraham and Mary’s grandsons), all born in China: Charles C., born in 1814; Alvin Austin, born in 1836; and Henry H., born in 1839. Another source adds a daughter named Sarah, and a son William appears in the 1850 census.

On Nov. 5, 1852, the family history compiler found that Ezekiel sold a 50-acre lot bounded on one side by the Palermo town line to his son Alvin, for $200.

Alvin Austin, born about 1831 and in China in 1850, married Lucy Peters, in Boston, Massachusetts, in March 1855. The writer of the on-line family history surmises she must have died almost immediately, because the 1860 census listed Alvin as a laborer again living with his parents, in China.

Alvin also moved to Aroostook County, where he married his second wife, Georgia Ann Cornelison, from New Brunswick. He worked as a barber in Houlton and Bangor; the couple moved to Cambridge, Massachusetts, where he died Dec, 22, 1901.

Henry H., born in or around 1840 (according to the on-line family history), spent his life as a farmer in China, never married and died of liver cancer Oct. 2, 1915.

Enough Talbots died in China so there is a Talbot cemetery, a small graveyard east of Yorktown Road on the China-Palermo boundary, just south of China’s Thurston Park. A legible stone marks the graves of Eliza Talbot and Sarah A. Freeman – although the dates do not match exactly, they are probably Ezekiel’s wife Eliza and her daughter Sarah (Augustine) Freeman. There are remains of three other stones in the same row, and two others separately (that might be footstones). Henry H. Talbot was reportedly buried “in a private cemetery,” perhaps the Talbot cemetery.

Another Black cemetery is on the east side of China’s Pleasant View Ridge Road, west of the Talbot cemetery. This one holds graves of the Sewall and Seco families.

Ambrose Sewall was a son of Elias and Amee Dunbar Sewall. Elias, born Aug. 1, 1751, in Bridgewater, Massachusetts, was a Revolutionary War veteran; an on-line source says he was listed in Harlem (now China) census records in 1800 and 1810, and died in China, date unknown.

Sharing the graveyard are at least seven stones that probably mark the graves of members of the Seco family. Between the two areas, the Waterville newspaper article says, in 1964 there appeared to be remnants of one or two more rows of graves.

According to the article, the Secos seem to have come to China in the 1850s (but Eliza Seco must have connected with Ezekiel Talbot earlier than that). Various other sources, including the 1860 census, describe two Seco families in China. One consisted of William, age 67 (born about 1793, in New Hampshire, and by 1860 blind), his wife Almira (Sewell), age 50 (born about 1809 or 1810, in Maine; one on-line source says she was the daughter of Ambrose and Mary Sewall) and seven children.

The other family included William Seco, Jr., age 30, his wife Elizabeth, age 27, and living with them seven-year-old Anna Talbot.

Hiram was William and Almira’s fifth son, born about 1838. A 2015 story from the Bangor Daily News, found on line, says Hiram was described as a blacksmith in the 1850 census (though if the birthdate is anywhere near right, he would have been a very young blacksmith). Most of the other adult males were listed as farmers, the article says.

On March 29, 1863, Hiram Seco and Lydia Perkins were married in Gardiner. Lydia was born, in Brunswick, on March 18, 1838. The couple had five children, born between about 1865 and 1873; they named their sons Hiram, William and George and their daughters Lydia and Mary, in honor of older family members.

Lydia Seco (the mother) died Oct. 24, 1901, and is buried in Brunswick. Hiram died sometime after 1910, probably in Brunswick, and is the only one of William and Almira’s children specifically listed as buried in the Seco cemetery.

April 17 has been designated National Ellis Island Family History Day. The web explains that the designation “encourages families to explore their ancestry and discover family who immigrated through Ellis Island,” which was the busiest point of entry into the United States from 1892 until 1924.

During those years, the website says, about 12 million immigrants came into the country through Ellis Island. One million arrived in 1907 alone; on April 17, 1907, the center processed 11,747 people, the busiest day on record.

After the first world war, the web says, the United States established consulates all over the world. One of their functions was to process immigrants, so Ellis Island was no longer essential. After 1924, the web says, the facility became a detention center for illegal immigrants, then a World War II military hospital and a later a training center for the Coast Guard.

Apparently there was a residual immigration center there, too, because the web says the last immigrant was processed on Nov. 12, 1954, the day the federal government closed Ellis Island. He is identified as “a Norwegian merchant seaman named Arne Peterssen.”

New York’s first immigration processing center was Castle Island, which was jointly run by New York City and New York State from August 3, 1855, to April 18, 1890. Some 11 million immigrants are recorded as coming through Castle Island.

When the federal government took control of immigration in 1890, Castle Island center closed. The web says a temporary site at the U. S. Barge Office “on the eastern edge of The Battery waterfront” was used while the federal Office of Immigration built the Ellis Island center.

The web lists castlegarden.org and ellisisland.org as on-line resources for lists of names and other information from each center.