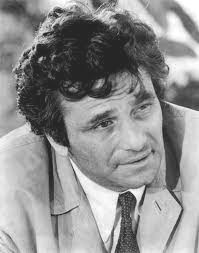 Peter Falk will always be best-remembered as the cigar burning homicide detective Lt. Columbo and rightfully so. His characterization of a man whose persona was that of a socially awkward bungler who was so easily distracted by the most insipidly trivial, useless pieces of information and yet would fool murderers time and again into thinking they would never get caught with his standard “Oh, I apologize for bothering you but just one more question!”

I have been watching the several available episodes on Amazon Prime, starting with season 2 and its very impressive guest star murderers row line-up:

John Cassavetes as a conductor who disposes of his pianist girlfriend after she’s pressuring him to divorce his wife. Cassavetes and Falk were very close friends who collaborated on several films, one of which was the harrowingly powerful 1974 A Woman Under the Influence, which Cassavetes directed and Falk played the emotionally insensitive construction worker and husband of a woman on the brink of a nervous breakdown (Cassavetes’s wife Gena Rowlands gave an award-winning performance as the main character).

Ray Milland as a murderous uncle who sends his spoiled brat of a nephew to his eternal reward.

Leonard Nimoy as a surgeon who commits three murders in violation of his Hippocratic oath.

English actor Lawrence Harvey as a world class chess champion who murders a rival he perceives as a threat to his world class status and which was one of Harvey’s last roles a year before his death as the age of 45, in 1973.

Martin Landau as twin brothers who electrocute a rich uncle in his bathtub with a blender. This episode also featured the positively brilliant actress Jeannette Nolan as the uncle’s perfectionist housekeeper.

Vera Miles as an entrepreneur in the cosmetics business who cracks a former boyfriend, portrayed by Martin Sheen, on the skull when he refuses to hand over an anti-aging formula he stole from her.

One most memorable episode featured the wonderful Anne Baxter as the murderess who ignites the gasoline explosion of an automobile being driven by a man who gossips too much. Her portrayal of the murderess ended up being a tearfully sympathetic one.

My first experience of Peter Falk’s acting was in 1962 when he appeared as a killer on the short lived TV series The Aquanuts, starring Ron Ely and Jeremy Slate. Falk conveyed very low key ominous presence vividly.