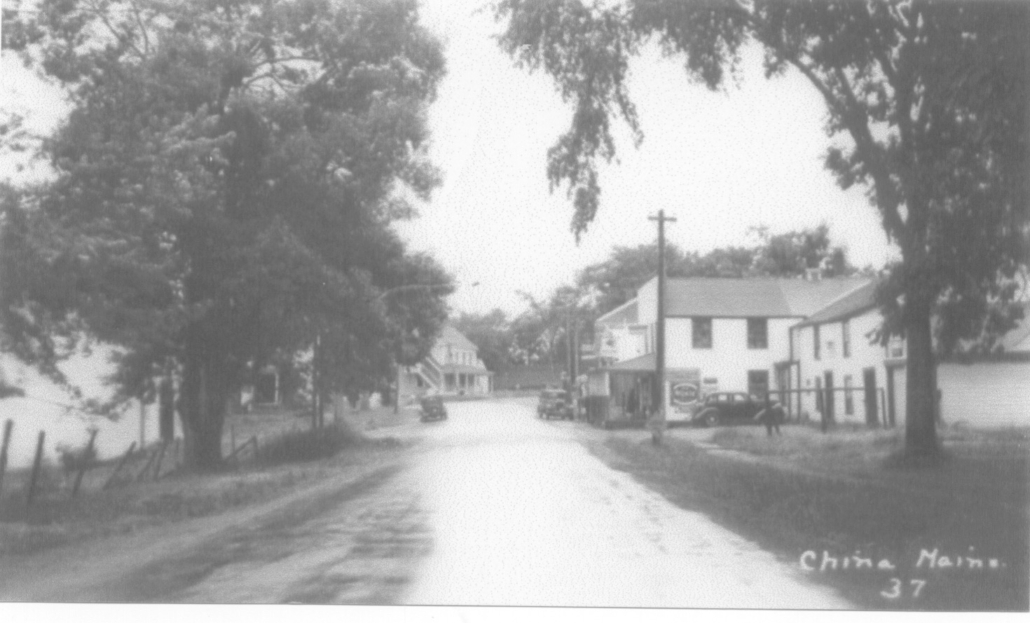 The Town of China lies north of Windsor and west of Vassalboro. Much of the town is in the watershed of China Lake, a major influence in the town’s history. Two of the town’s four villages, China Village and South China, lie at opposite ends of the lake’s east basin. The other two, Branch Mills and Weeks Mills, are on the West Branch of the Sheepscot River in eastern China, upstream of Windsor.

China Lake consists of two basins connected by a short strait called The Narrows. The long, narrow east basin runs from the northern end of town about two-thirds of the way to the Windsor line. The irregular circle that is the west basin extends westward into Vassalboro.

The Kennebec Proprietors, who have been mentioned earlier in this series, owned a vast tract on both sides of the Kennebec River. In 1773, they sent John “Black” Jones and Abraham Burrill (or Burrell) to begin surveying the area that became China.

Like earlier surveys along the Kennebec, the Jones-Burrill plan shows rectangular lots starting from the water on both sides of China Lake (then called Twelve Mile Pond, because it was 12 miles from Fort Western in Augusta). In the south end of town, similar lots ran east from the shore of Three Mile Pond. Rangeways separated each tier of lots as the surveyors moved inland.

According to the China Bicentennial History (1975; revised edition 1984), Jones and Burrill started work in the fall of 1773 and finished in the spring of 1774. Jones spent the winter in Gardiner, where he knew the Clark family.

In the summer of 1774, two generations of Clarks and several other families settled around the southern part of China Lake. The Bicentennial History and Kingsbury’s Illustrated History of Kennebec County Maine 1625-1892 (1892) disagree on which Clark came first.

The Bicentennial History quotes from the diary of Benjamin Dow, who wrote on July 17 that he, one of the Clarks, a Burrill (perhaps Abraham), Job Chadwick and Michael Norton had felled the first tree in what they had named Jones Plantation. 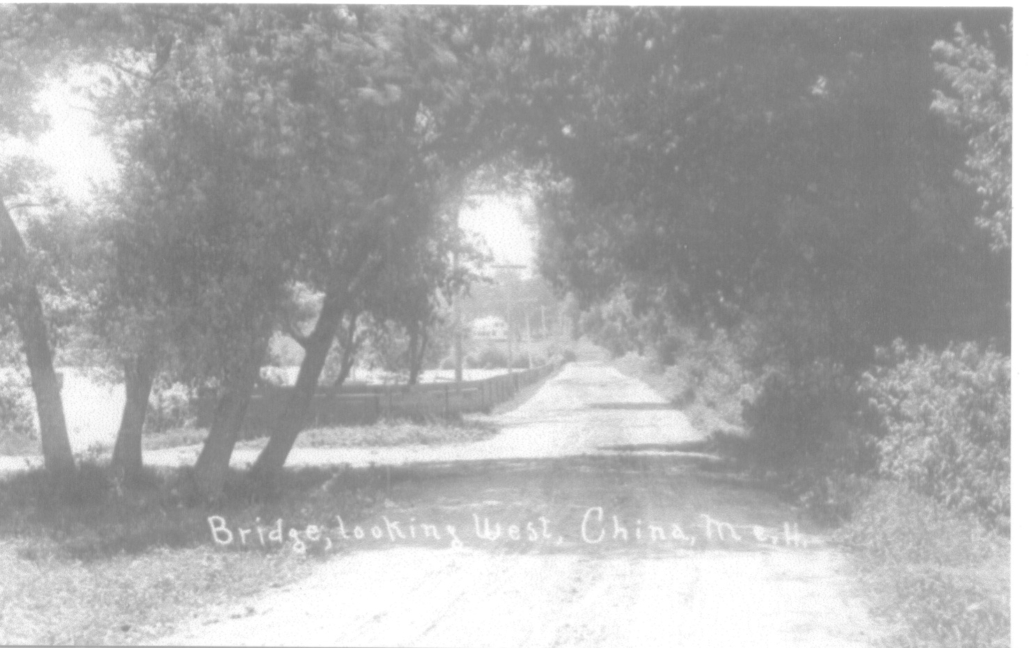 The China Causeway at the Head of the Lake, heading west, circa 1914. (Archive photos)

Joseph Evans was said to be the first settler in the backland east of China Lake, leaving his wife and family there while he served in the Revolutionary army. By 1802 Caleb Hanson was in the same area. Evans Pond and the Hanson Road that runs along its eastern shore are named after those families.

Farther east, along the West Branch of the Sheepscot River south of Branch Pond (which is mostly in Palermo), records list nine families who started the village called Branch Mills in 1790 or 1800. One of the Clark brothers was probably the first to settle at the south end of the lake, where South China Village developed. To the southwest, at Chadwick’s Corner (where the Arnold Road forks west off what is now Route 32 South or Windsor Road), Ichabod Chadwick was the earliest resident.

The southwestern part of town, now the Weeks Mills and Deer Hill area, seems not to have been settled until the early 1800s. The Bicentennial History says there were a sawmill and a gristmill in Weeks Mills by the fall of 1807, and lists several men surnamed Gray among Deer Hill residents in and after 1809.

Jones Plantation kept its name from 1774 until February 1796, when the Massachusetts General Court approved incorporating it as the town of Harlem. Ava Harriet Chadbourne says in her Maine Place Names and the Peopling of Its Towns that the name was taken from Harlem in the Netherlands, but she does not offer a reason or supporting evidence.

In 1796 Harlem’s north boundary line ran across China Lake south of the present town line. What is now northern China, including China Village, was part of the Freetown settlement, which became Fairfax in 1804 and is now Albion.

The town of China came into existence on Feb. 5, 1818, by act of the Massachusetts legislature. It consisted of the northern half of present-day China plus parts of Fairfax and Winslow, establishing the north boundary substantially where it is now. The southern half, from approximately the location of the current town office on Route 202 (Lakeview Drive) remained Harlem. Records do not show why the separation occurred.

The story of the naming of the town is well-known locally. Japheth C. Washburn, from China Village, represented the new town in the Massachusetts General Court, with instructions to have it named Bloomville. The representative from Bloomfield (which was separated from Canaan in 1814 and added to Skowhegan in 1862) objected that the similarity in names would confuse mail delivery. Washburn proposed China because it was the name of one of his favorite hymns.

The Bicentennial History says on Dec. 18, 1820, Harlem voters asked to become part of China. China did not want them; but town meeting votes and negotiations with legislators – after March 1820, Maine legislators – were unsuccessful. (A June 18, 1821, vote showed one China voter in favor of accepting Harlem and 81 opposed.) In January 1822 the two towns combined and China acquired most of its present dimensions. Harlem continued to elect town officers to close out town affairs for another six years.

The final significant boundary change was on the southeast, where the line between China and Palermo was redrawn in 1830, adding to China a long narrow triangle of land. The Bicentennial History quotes from the description of the new boundary between the two towns, which was also the line between Kennebec and Waldo counties, with its references to lot numbers, “the house of Joseph Hacker” and a beech tree on the north side of the road from Augusta to Belfast.

Each of China’s four villages was a commercial center for most of the 19th century and the first part of the 20th century. The Bi­cen­tennial History lists a wide variety of businesses. Unusual for such a small town, each village had at least one hotel. Probable reasons are roads and China Lake’s summer visitors.

In China Village at the north end of the lake, the hotel was in the building still standing (now a private residence) on the northeast corner of the intersection of Main Street, Causeway Street and Neck Road. The Bi­centennial History says the building dates from the 1820s and was a hotel until the mid-1940s. From 1827 to 1864, General Alfred Marshall was the innkeeper; the inn was a stagecoach stop. Marshall was born around 1797 in New Hampshire; he was a general in the state militia, a state representative for three years and from 1841 to 1843 representative from Maine’s sixth or seventh (depending on the source) district in the U. S. House of Representatives.

The 1907 and 1913 editions of the Maine Register or State Year-book also list the Starkey House in China, run by G. L. Starkey. In 1913, the Gordon House, operated by E. Gordon, was also listed.

South China is now bypassed by both main roads, Route 3 (Belfast Road) running roughly east-west from Augusta to Belfast and Route 202 (Lakeview Drive) coming south along the east shore of China Lake and intersecting with Route 3 and Route 32 (Windsor Road). In the 19th and first half of the 20th century the village surrounded a four-way intersection; incomplete records suggest it had at least two and perhaps four or five hotels.

The Bicentennial History and websites provide evidence of the South China House, in business by 1855 on Main Street east of the church, once run by Sabin Lewis; the J. R. Crossman Hotel in the southeast corner of the intersection by 1879, and an unnamed hotel in that location rumored to have a secret room where fugitive slaves were hidden in the 1850s; T. M. Jackson’s Jackson House in the early 1890s and the Whitehouse from at least 1907 to 1917, neither with a location provided; and a nameless 20th-century hotel on Weeks Mills Road east of Chadwick’s Corner.

Weeks Mills had one long-running hotel and apparently a second early in the 20th century. The Bicentennial History points out that the 1879 map shows the village at the intersection of west-to-east roads connecting Augusta to Belfast and south-to-north roads connecting Windsor and points south to China Village and points north.

Kingsbury writes the large hotel on the south side of Weeks Mills’ Main Street was started as a tavern around 1875, converted to a hotel by Alden McLaughlin, and in November 1887 sold to Abram McLaughlin, who still owned it in 1892. The Maine Register calls it the Weeks Mills House in 1882, the Union Park House in 1888 and 1890. The 1907 Register again lists the Weeks Mills House, run by Charles Chisam; the 1913 edition lists Frank Gardiner’s Lonsdale House and adds Joseph Segee’s Segee House, which reappears in the 1914 and 1915 editions.

In Branch Mills, the Bicentennial History refers in a footnote to the Shuman House, described as a wooden building that could accommodate 25 guests. The 1908 Maine Register lists Mrs. Nellie E. Shuman as the owner. It was one of many buildings burned in a fire that destroyed most of the village on June 26, 1908.