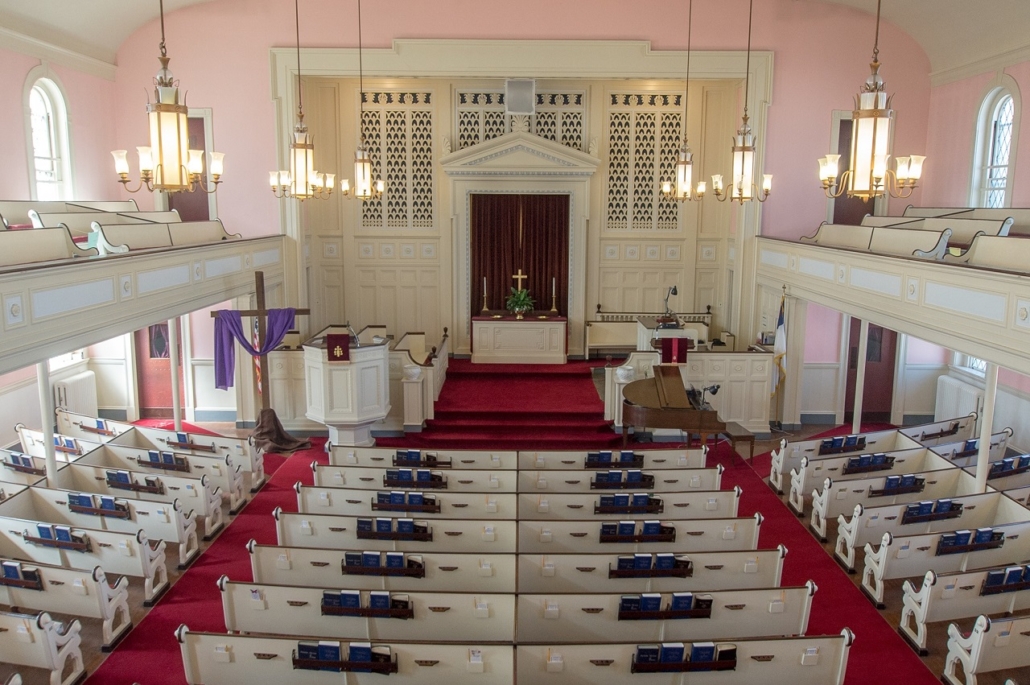 Inside view of First Baptist Church, in Waterville. 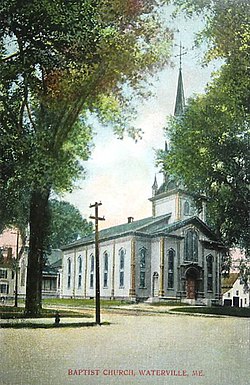 Moving up the Kennebec to the city of Waterville, two of its many church buildings are on the National Register of Historic Places: the First Baptist Church, at 1 Park Street (on the northwest side of the intersection with Elm Street, across Elm Street from the Waterville Public Library), and the Universalist-Unitarian Church, at 69 Silver Street, in the north corner of the Y-shaped intersection of Elm and Silver streets.

Patricia Brown, the student assistant at the Maine Historic Preservation Commission who prepared the National Register nomination papers, wrote that the church is historically significant as “Waterville’s oldest existing public building and first denominational structure.” Brown used as one of her sources a book now almost 100 years old, Minnie Philbrick’s 1925 1818-1918 Centennial History of the First Baptist Church of Waterville, Maine.

Baptist congregations had been established in towns near Waterville, including China, Clinton, Sidney and Vassalboro, between 1788 and 1806, according to George Dana Boardman Pepper’s chapter on churches in the Waterville Centennial History. Rev. Jeremiah Chaplin (Jan. 2, 1776 – May 7, 1841) organized Waterville’s first Baptist congregation, at his house, on August 27, 1818.

Chaplin came from Massachusetts to Waterville in 1818 as the first President of the Maine Literary and Theological Institute (later Waterville College and then Colby College); he returned to Massachusetts in 1833. Pepper called the Waterville church “the child of the college.”

Kingsbury wrote in his Kennebec County history that of the 20 founding members of the Waterville church, 13 were from Sidney’s First Baptist Church.

Kingsbury probably meant Second Baptist. In her history of Sidney, Alice Hammond explained that in 1818, Sidney’s Second Baptist Church had no pastor, leading 13 members to join with seven from other towns under Chaplin’s leadership. “Second Baptist in Sidney is proud to have been the ‘mother church’ of the First Baptist in Waterville,” Hammond wrote, giving the church a second parent.

Hammond further explained that organizers of the first Baptist church in Sidney, in 1791, named it the Second Vassalboro Church (Sidney did not separate from Vassalboro until 1792). It became First Baptist when Sidney’s second Baptist congregation organized in February 1806, and later West Sidney Baptist.

The early Baptist services in Waterville were held in a 1796 meeting house on the site of the present Waterville City Hall. In 1824, the congregation decided to build their own church.

Historian Brown wrote that in 1824, “it was illegal for a religious group to own property.” (The state legislature eliminated the prohibition in 1901.)

Pepper wrote that Packard’s contract was for $3,375. The foundation cost another $100 plus a free pew worth $125. Most of the money came from selling pews, Pepper wrote. The new church was dedicated Dec. 6, 1826; but Pepper wrote that heating stoves were not approved until 1832.

Until 1829, the First Baptist Church hired no pastor, depending on Literary and Theological Institute ministers. From 1834 to 1841 its pastor was Rev. Samuel Francis Smith, who had written “America” in 1831, while he was studying at Andover Theological Seminary, in Massachusetts. Smith was simultaneously teaching modern languages at the former Institute, which had become Waterville College on Feb. 5, 1821.

The church building went through changes and additions from the 1840s on. Kingsbury wrote that the church was “repaired and reseated” in 1846. In 1875 there was a major renovation, inside and outside, that Kingsbury said cost $17,000. The work was done under the direction of architect Francis Fassett (who has appeared repeatedly in this series of articles, most recently on June 10 as architect of Augusta’s South Parish Congregational Church).

The 1875 changes included removing a chapel Samuel Redington had paid to have built in 1836 and adding the vestry on the west end.

As the Waterville centennial history went to print in 1902, Pepper wrote that because of the growth of the Sunday School, a building committee was planning another addition.

This idea might not have been carried out, because Brown wrote in the 1975 National Register application that the church was its original size, except for the addition of the vestry on the back, and stood on its original granite foundation.

A two-story wooden building facing east, it had a steeple enclosing the bell and topped by a weathervane. Brown described its architectural style as “a combination…ranging from the Neo-classical revival to the Victorian Era.” Later she called the main entrance Romanesque style.

The many large windows have always been clear glass rather than stained glass. Fassett, Brown wrote, added “window moldings and gable decorations.”

Inside, Brown found that the original pulpit was so tall that the minister “looked straight at the people sitting in the balcony.” It had been lowered before Fassett did the major interior renovation that left only the three-sided balcony (accessed by curving stairways from each side of the vestibule) as originally constructed.

The building was rededicated after the reconstruction, Brown wrote. 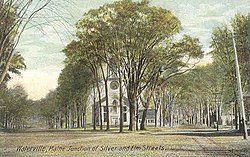 Waterville’s second National Register church, the Universalist Unitarian Church at the south end of Elm Street, was built in 1832 and gained historic recognition on Feb. 17, 1978.

The nomination form for the National Register was prepared by Frank A. Beard and Robert L. Bradley, the team who nominated Augusta’s South Parish Church, assisted by intern Kristin Stred. Writing in 1977, they described a “late Federal style meetinghouse with early elements of the Gothic revival.”

The original church on the site was built by a Waterville Universalist congregation that Rev. Sylvanus Cobb organized May 18, 1826. Kingsbury wrote that the first worshippers included 11 people from Waterville, four each from Fairfield and Sidney and one from Winslow.

Members met in Cobb’s home (per Wikipedia) or the “town meetinghouse” (per Beard and Bradley) for the first five years. In 1831, “having matured a plan to erect a church edifice” (Kingsbury), they formally organized as the First Universalist Society in Waterville (Pepper).

At the society’s first official meeting, Nov. 17, 1831, they appointed a six-man building committee headed by Jediah Morrill to have a church built within a year.

Sources agree that Simeon Matthews or Mathews donated part of the lot at the intersection of Silver and Elm streets. Kingsbury cited the record of the Jan. 28, 1833, meeting during which parishioners thanked him for the gift, “valued at $100.”

James Crommett might have given another piece of the lot, but, Kingsbury wrote, the deed got lost, leaving no record of the donor. The church bought the south point of the lot from Crommett for $50.

The Universalist church was finished July 9, 1832. A Universalist Society meeting on Nov. 8, 1832, authorized Morrill to chair another committee to provide furnishings, including a stove. 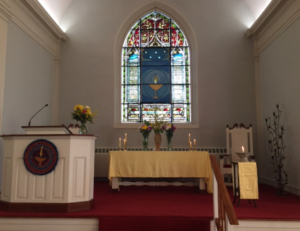 Inside view of the Universalist-Unitarian Church, in Waterville.

Morrill had earlier made a generous contribution to the building fund. Kingsbury wrote that when he died in December 1872, after more than 50 years as “the acknowledged leader of the society,” he willed $3,000 to the church, the interest to be used to further its activities.

Beard and Bradley learned that in 1833, Waterville officials agreed to pay someone not more than $30 a year to ring the church bell three times a day. They further agreed the town would maintain the area in front of the church, to be used as a park.

Kingsbury said the first organ was added in 1852 (Pepper wrote that there had been at least one before then). In 1854, the congregation spent $600 on repairs. In 1879, Susan Hoag, Morrill’s niece, donated another $500 for repairs.

In 1894 a chimney fire caused considerable damage. George H. Ware offered to pay for building a basement farther north on the lot and moving the church onto it. The entrance was changed to face south as part of the project (there is no mention of which way it originally faced; this writer guesses it had faced east).

Pewholders voted $1,500 for repairs, in addition to Ware’s donated work. The renovated church got a new organ, donated stained-glass windows and a new bell (for $150 plus the old bell, by then cracked, according to Beard and Bradley).

Mean­while, the Unitarians had built a church on Main Street in Waterville in the 1860s. They invited the Univer­salists to meet there while damage from the 1894 fire was repaired.

Writing in 1977, Beard and Bradley called the church building “a well proportioned Federal-Gothic Revival transitional structure” and a significant Waterville landmark. They described a rectangular wooden building on a granite foundation. Each side wall had five bays, each bay with a tall stained-glass window under a louvered Gothic-type arch.

Each side of the square central tower had a clock face with Roman numerals. Above the tower, an octagonal belfry had a “delicate wooden balustrade” and “eight open Gothic arches.” The belfry roof was an octagonal dome topped with a cross.

By 2008, Wikipedia says, the bell tower was so weakened by age that it was removed. Tower, clock and lightning rod were sold at auction, and a new tower was put up by Christmas Eve 2008.

After a college major in Chinese history, she graduated from Harvard Law School in 1984 and worked in the corporate world, specializing in mergers and acquisitions. She switched to working as a corporate recruiter, and in 2012 formed Stred Executive Search, LLC, a firm that finds qualified and experienced new members for executive boards.

The motto on the firm’s website: “We promise you: ‘No empty suits.'”

Stred describes the 1977 summer internship researching and writing at Maine Historic Preservation as “a good fit,” and adds “Frank Beard and Robert Bradley were supportive mentors that summer.”