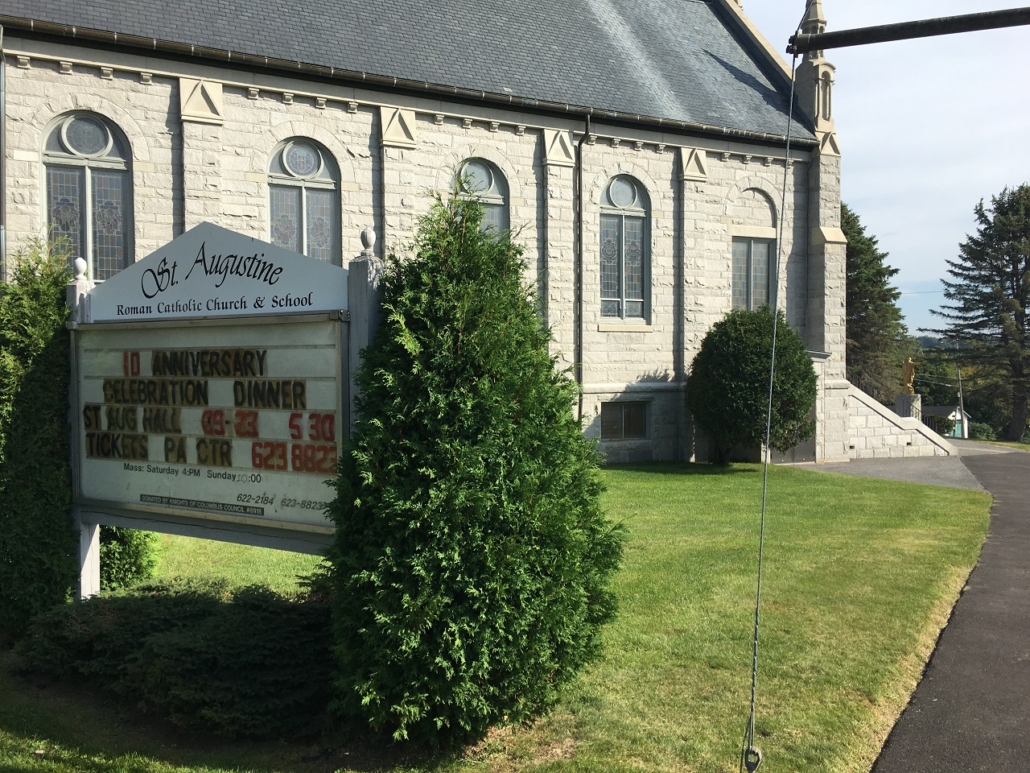 Two distinctly non-British peoples who came to live mainly in Augusta and Waterville, the largest manufacturing centers in the central Kennebec Valley in the 19th and early 20th centuries, were French-Canadians who came south from Canada’s Québec Province, and Middle Easterners, especially Lebanese and Syrians.

Wikipedia says the first European to visit what is now the Canadian Province of Québec was the Italian Giovanni da Verrazzano, whose expedition in 1522 or 1523 was authorized by King Francis I, of France. Successive French explorers followed, and in 1608 Samuel de Champlain founded Québec City.

The area was a French colony from then until the British conquered it, a victory recognized by the 1764 Treaty of Paris. The province has been under British rule ever since, in varying forms.

However, relations with the British government and with the rest of British Canada have been stormy at times. The Catholic Church has been important in the province, and French remains the official language. French-Canadians brought a distinctive culture and formed separate communities when they came to Maine.

Le Club Calumet’s on-line history (see box #1) says there have been French-Canadians in the area that is now Maine since 1611. Around 1830, improvements to the route called the Kennebec Road or the Canada Road facilitated north-south movement.

An on-line genealogy of a family whose ancestors followed the Kennebec Road describes it thus: “The road begins in Beauce, Québec, then in Maine in the Jackman area and follows the Kennebec River through Skowhegan, Waterville, southeast to Phippsburg, Maine.”

Another on-line source calls it “a system of water and portage routes linking the Chaudiere River in Québec to the Kennebec River in Maine” and says it “served as the primary transportation corridor between Canada and Maine until the construction of the Grand Trunk Railway in 1853.” Used for thousands of years by Native Americans and since the 17th century by European missionaries, traders and other wanderers (and occasionally soldiers), it remained in primitive condition until the 1830s.

By then the Kennebec Road was used mostly by “drovers taking livestock to the market in Québec City,” the source says. A few people lived along the route, though, and as they became more numerous they got the clout to demand improvements, especially after Maine became a separate state in 1820.

Between 1828 and 1835, the source continues, Maine state officials added “a customs house, postal service, a stage line and roadhouses. A ten-dollar ticket would buy a two-day stage coach ride from Québec City to Skowhegan.

“Construction of the state capital (1829) and the Kennebec dam (1834) in Augusta drew French Canadian workers with their families to Maine. A cholera epidemic in 1832 and the depression, famine and rebellion of 1837 [against British monarchical rule] hastened this migration.”

Urban jobs were not the only attraction for French-Canadians. Robert P. Tristram Coffin, in Kennebec Cradle of Americans, described 19th-century Maine loggers:

“Yellow and brown mustaches and many more black ones, for a great many of the men were ones who had stemmed from ‘P.Q.,’—the Province of Québec, – who had followed the Maine rivers down from the forests of the St. Lawrence, who spoke Canuck, and who handled their slim symphonies of curving wood and steel, their axes, as if they were attractive and tender young women.”

In a later chapter titled Yankees from the Province of Québec, Coffin described French-Canadian mill workers. From the early 1800s, and especially from the 1860s, large mills making cloth, paper and other products were powered by the Kennebec and needed workers, and many of those workers came from Québec.

In mill towns and cities, Coffin saw the French immigrants as a separate group in the second half of the 19th century. He imaginatively described the original Yankee home-owners moving uphill away from the river as French families settled near the mills – and moving farther as the French multiplied and prospered and they, too, claimed more living space.

Each riverside town and city had its Frenchtown, he wrote. “Two nations keeping apart, eating their different foods, having their own ways, their own schools, their own barbers and bakers.”

The Yankees considered the French-Canadians foreigners, Coffin wrote, even though they had been on the continent longer than most of their detractors. He praised them as holding onto the values of the “most civilized of all the Europeans,” describing them as family-loving, religious and hard-working.

Thomas J. Lynch, contributing to Kingsbury’s Kennebec County history, traced the first French Catholic influence in the Augusta area to September 1646, when Father Gabriel Druillettes, a Jesuit, opened a mission to the Abenakis. The Mission of the Assumption was in a log cabin on the east side of the Kennebec, about three miles north of the Cushnoc trading post.

Lynch saw Augusta’s St. Mary’s Catholic Church as the successor to the Mission of the Assumption, even though by the time the Kennebec County history was finished in 1892, it was “restricted to the English-speaking Catholics of the city” and there was a second Catholic church for the French-speakers.

In the 1880s, French immigrants found jobs in the Edwards Manufacturing Company’s cotton mill at the river end of Northern Avenue. The Franco-American community formed near the mill in the north end of the city, an area variously called Sand Hill, Cushnoc, Cushnoc Heights or simply “the hill.”

The mill owners provided housing for some of their employees, and in 1887, in response to French-speakers who wanted services in their own language, provided space for a French Catholic church on Washington Street, which runs north off Northern Avenue part way up Sand Hill. The company sold one lot for $600 and donated a second lot.

St. Augustine Church’s website says most of the parishioners in the late 19th century were from rural parts of Québec and New Brunswick. Whole families worked in the mill, including “children as young as ten years old.”

Working hours were long, and non-French neighbors were often unfriendly. To the French-speaking families, “Sunday was a day to worship God and rest, beginning with attending Mass, followed by getting together with friends and relatives, as well as getting ready for next week’s labor.” 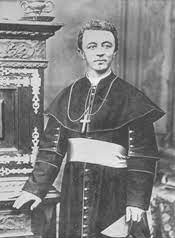 Bishop James Augustine Healy, who served in Portland from 1885 to 1900, came to Augusta to bless the cornerstone for the new church on Aug. 28, 1888, and it was built that year. Kingsbury called the wooden building “second to none in the city in the beauty and richness of its interior decorations.”

“Folklore has it that the parish was named after Bishop Healy,” the website says. The parish at that time consisted of 160 families.

The church was accompanied by a school, taught from 1892 by the Ursuline Sisters and from 1904 by the Sisters of the Presentation of Mary. Rev. Telesphore Plante served as pastor from October 1887 until he retired Nov. 27, 1889. His successor was Rev. Arthur Hamel, who serve until he moved to Lewiston in 1907.

Under Rev. Hamel’s guidance, the website says, the construction debt was reduced; the church’s interior was redecorated; and the parish cemetery was opened in 1894, “with a solemn blessing by Bishop Lafleche of Trois-Rivières [Québec] with permission extended by Bishop Healy.”

The parish women’s organization, “Les Dames de Sainte Anne,” was organized in 1897. The website credits its members with raising thousands of dollars for “the betterment of the parish” and for “scholarships and other school-related activities.”

Construction of the present granite church building began in 1913, on land donated by Edwards Manufacturing. By then, the website says, the parish included 2,783 people from 553 families. The first service in the new church was the December 1916 Christmas Mass. 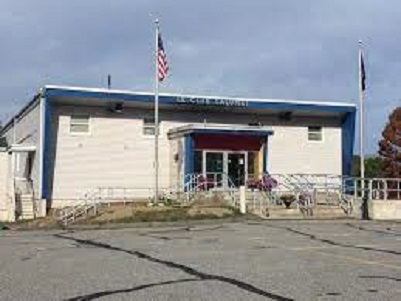 On Sept.21, 1922, two dozen members of Augusta’s Franco-American community met “in the basement of Morin’s Shoe Store, on Water Street,” and organized Le Club Calumet, called on its website, calumetclub.com, “one of the foremost of Augusta’s civic organizations.” Its motto is “Unis pour toujours” (United forever); its headquarters is at 334 West River Road (Route 104), in Augusta.

The organizers’ goal was to give the Franco-American community more of a voice in city affairs. The website quotes: “The purpose of Le Club Calumet shall be for the propagation of the French language and intellectual development, by means of music, literature, education, and anything else the club shall judge beneficial to the interest of Franco-Americans.”

The club sponsors multiple activities open to the public, including at 8 p.m., on May 21, Comedy Night with The River Comics (ticket information is on the website). A Hundredth Anniversary Dance was held May 7, and a hundredth anniversary celebration is scheduled for Sept. 22 through 25.

Club members have always supported education for local Franco-American youngsters. In 1922, the club’s Calumet Educational & Literary Foundation website (calumeteducationfoundation.org) says, the club “appointed a committee to encourage students to continue their education by enrolling at Cony High School.” Now scholarships and grants are offered for education beyond high school; the website does not say whether aid is still limited to students of Franco-American heritage.

Since 1957, part of the scholarship money has come from the club’s “birthday dollar program,” started at the suggestion of Irenee Pelletier: club members pay one dollar into the education fund on their birthdays. The calumeteducationfoundation.org website has information on making tax-deductible donations. The website says for 2020-21, the foundation provided 20 scholarships with a total value of $107,000. 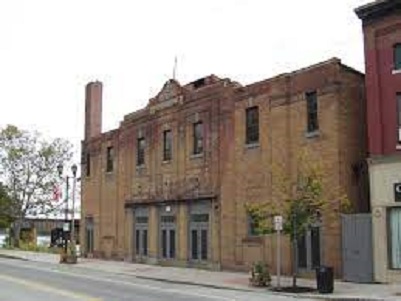 In the Feb. 4, 2021, issue of The Town Line, the Colonial Theater on Water Street, in Augusta, was described as an individually-listed historic building within the downtown Augusta historic district. Built in 1913, after a fire destroyed its predecessor, and rebuilt again after another fire in 1926, its style was described as “Beaux Arts and Georgian Revival…[with] Art Deco features.”

The 2014 historic register listing called it “an eclectic example of early 20th century design by a noted architect.” The architect was Harry S. Coombs (1878 – 1939), based in Lewiston.

Edwards described the theater as “in the midst of a major renovation project to bring it back to life.” For the May 6 show by Las Vegas magician and mind reader Kent Axell (a Manchester, Maine native, Edwards wrote), seating capacity was 300; Edwards quoted executive director Kathi Wall as aiming for 1,000 seats.

The theater website, colonialtheater.org, says more than $3 million of the estimated $8.5 million cost has been raised so far. In April 2022 the National Park Service awarded the theater $160,229 that will be used to restore windows and exterior doors.

The website has information and illustrations about the theater’s history and the restoration plans, as well as an on-line donation button and contact information.