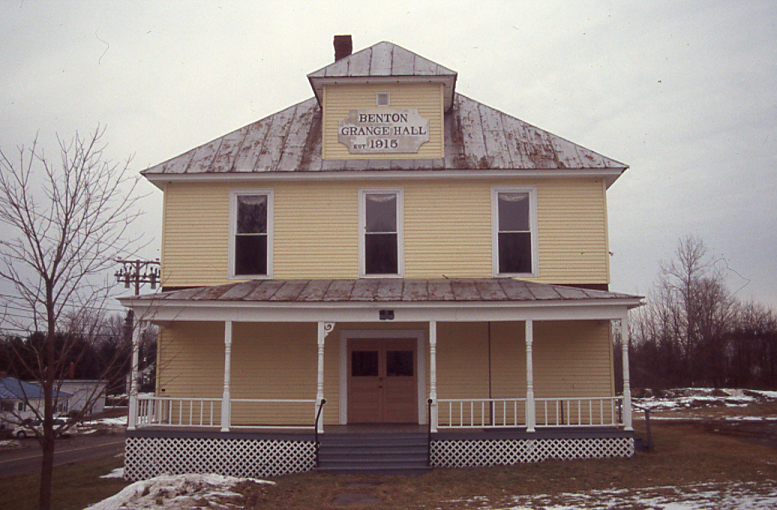 The 1915 hall that serves Benton Grange No. 458 is one of 16 Maine Grange halls listed on the National Register of Historic Places, and one of two individually listed in Kennebec County. It was added to the register April 28, 2004. 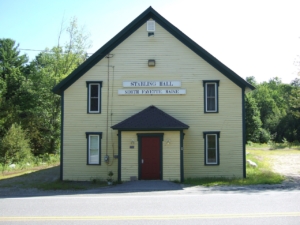 (The other Kennebec County Grange Hall on the register is the former Starling Grange, now town-owned Starling Hall, in Fayette. Friends of Starling Hall have a website and a Facebook page and welcome donations for preservation work.)

Located on a 1.7-acre lot at the intersection of River Road and School Drive, south of Route 100, Benton Grange Hall is a wooden building two stories high with a basement. The south-facing front of the building has a wide center doorway and large open porch. There are three front windows on the second floor; above them a hip-roofed dormer holds a sign, in need of repainting, identifying the building.

Architectural historian Christi A. Mitchell, of the Maine Historic Preservation Commission, prepared the nomination form for the National Register (as she did for two farms described in the March 10 issue of The Town Line). She calls the Grange building’s architectural style “essentially Colonial Revival,” and the more elaborate porch “Queen Anne-esque.”

Inside, the lower floor has a dining room beyond the entrance-way. Most of the second floor is a large open room for meetings and community activities, like the Saturday-night public dances the Grange sponsored in the 1950s.

Benton Grange was organized in 1906. Mitchell found that many of the charter members switched from Clinton Grange, established in 1887 or 1888, to the new one, probably because Benton was their home town.

In 1909, she wrote, town records showed that 94 out of 298 heads of household in Benton “(including retirees and widows)” gave their occupation as “farmer.”

Members met at the Benton Station school for the first years. By 1910, with close to 200 members, they decided to build their own Grange hall.

The decision was implemented five years later. Fairfield architect Frank M. Gifford designed the building; it was completed in mid-October 1915, in time to host that fall’s Grange fair.

Mitchell quoted a description of the Dec. 3, 1915, dedication of the building from the Dec. 4 Waterville Morning Sentinel. Speaker W. J. Thompson commented that the new building was one of the most expensive Grange Halls in Maine. Building it, he said, was a credit to Grange members and to the community.

Benton Grange, like many others, declined with the decline in agriculture. Mitchell wrote that the fairs ended in the 1940s. However, she wrote, Benton town meetings were held in the Grange Hall from 1915 to 1990, and as she wrote in the spring of 2004 Grangers hoped to make the second-floor space handicapped-accessible so town meetings could again convene there.

According to its Facebook pages, Benton Grange is still active, is seeking new members and as of March 2021 resumed renting the Grange Hall for private and public events (no alcohol allowed). 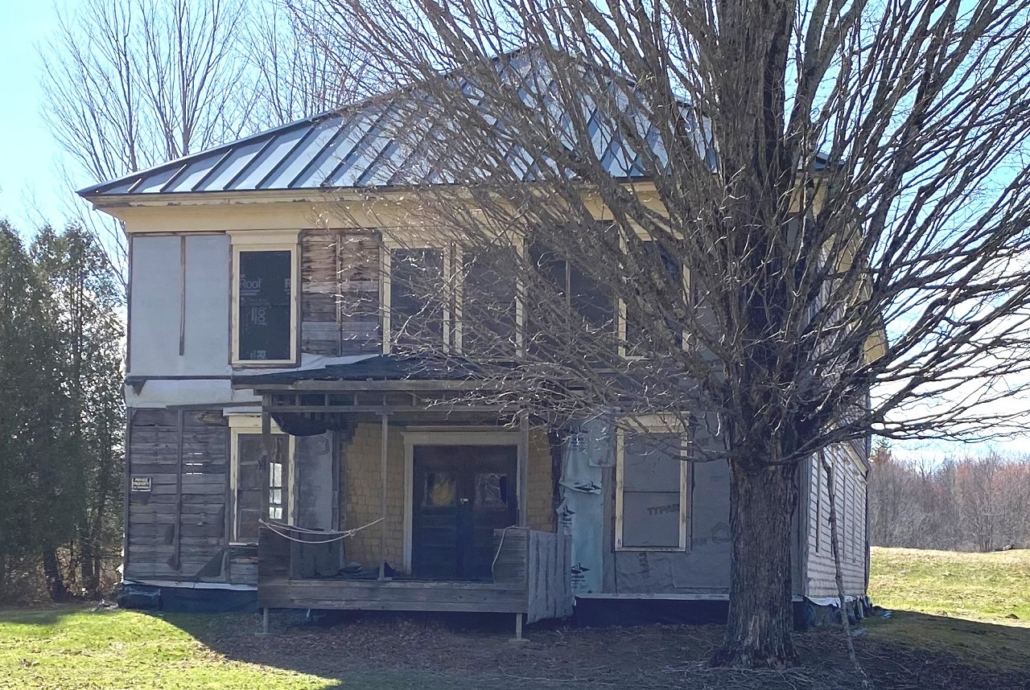 The deteriorating Silver Lake Grange, in China Village, in 2021. (photo by Roland Hallee)

The first of China’s three local Granges was China Grange #295, organized in South China on Dec. 29, 1887. Henry Kingsbury, in his Kennebec County history published in 1892, called it “flourishing.” Members met the first and third Wednesday evenings of the month in the Ancient Order of United Workmen’s South China hall.

(Wikipedia says the A.O.U.W. was another post-Civil War fraternal organization, created in Pennsylvania in the late 1860s with the primary aim of providing insurance for working men. The Harlem chapter, #39, of the A.O.U.W. was organized Aug. 27, 1885, with 13 charter members, Kingsbury wrote. Their name, Harlem, was the Town of China’s name from 1796 to 1818.)

By 1902, according to the Maine State Grange “Proceedings” of that year, China Grange had 111 members.

There is no record of a South China Grange Hall. The China bicentennial history says when the consolidated school on Lakeview Drive (now China Middle School) opened in 1949, town voters let the Grange rent the no-longer-needed South China schoolhouse on the south side of Route 3, just west of the Route 32 North intersection.

The China history says the China Grange remained active “until about World War II [until at least 1949, apparently], when it merged with Silver Lake Grange in China Village.”

(Contradictorily, the China history references a February 19, 1876, diary entry saying a Grange had been organized that afternoon at China Academy, the high school on Main Street in China Village. Kingsbury, finishing his history in 1892, made no mention of a Grange in China Village, and the number 327 would not have been assigned in 1876.)

The inventory of the Maine Historical Society’s collection of Grange documents lists under “China” an 1894 “receipt” and “receipt books” for most of the years between 1935 and 1953.

Silver Lake Grange Hall, still standing on the west side of Main Street in China Village, was designed and built in 1908 by local builder Fred S. Wallace. The China history quotes from an account in the March 4 issue of the Bangor Commercial Farmer and Villager describing the Feb. 24, 1909, dedication and praising the new building.

Silver Lake Grange Hall is a two-story, hip-roofed wooden building with an open front porch, a ground-floor dining room and kitchen and a second-floor meeting room. It has no basement.

The Commercial Farmer and Villager writer mentioned the “pleasant, sunny room for a gentlemen’s dressing room” near the entrance and the “ladies’ dressing room…, commodious and convenient” behind the dining room. Neither included toilet facilities.

The “well attended” 1909 dedication began with a 10:30 a.m. ceremony at which the State Grange Master spoke. After lunch in the new dining room, an afternoon program offered speeches and instrumental and vocal music.

A lengthy evening program included more music, recitations, a farce and two “scenic readings,” one of which had a dog in the list of participants.

Silver Lake Grange had a stable in 1909, because the China history says the local Masons appropriated $91.67 for one-third of it, probably for rental, not purchase. (In 1824 the two Masonic Chapters built their own stable beside the Masonic Hall, which was at the south end of Main Street.)

Silver Lake Grange “dissolved in the late 1960s,” according to the China history.

China’s short-lived third Grange, called China Grange #578 (or occasionally China Lake Grange, depending on the source), was organized in the fall of 1974 and took over the Silver Lake Grange Hall. Dennis Harding was the first Master.

The new organization lasted two years or less. The China history quotes Harding as saying one reason for its failure to take hold was that “the young people did not like to use the outhouse.”

Sometime after 1977, ownership of the hall reverted to the Maine State Grange. (The 1977 application for the China Village Historic District lists the China Grange as the owner.) The state organization sold it in the fall of 1983 to two local residents who hoped to create senior citizen apartments.

Their plan was never realized. The present owner of Silver Lake Grange Hall has had it on the market for several years.

Kingsbury says in 1890, the Grange bought Centennial Hall, on Church Street, in Clinton. In 1892, he wrote, the second floor was for exhibitions and the organization used the ground floor for its other activities.

(John P. Billings built Centennial Hall in 1876, Kingsbury wrote. Billings was a Clinton native, born in 1828. In 1843, Kingsbury says, he was learning to make edge tools – knives, hatchets and the like – in Waterville.

In 1851 Billings joined the California Gold Rush that had started in 1848 and, Wikipedia says, attracted 300,000 hopeful gold-seekers by the mid-1850s. After 14 years as a miner, Billings returned to Clinton in 1865, apparently wealthy enough to build the hall, and resumed the “manufacture of edge and stone tools.”)

Maine State Grange records include a receipt book from Clinton Grange for the years 1933 through 1935.

One of a set of antique postcards on line shows an undated photo of a Clinton Grange hall, set on flat land, with newly-planted trees beside the building and across the street. The building is a three-story wooden rectangle with a high peaked roof and a flat-roofed open porch across the entire front.

The double front door has a window on each side, three windows above it and one more full-sized window under the roof. On the visible side of the building there are five windows on the ground floor (perhaps because the stairs go up the inside wall where the front one would otherwise be) and six on the second floor.

The building is painted white. The shutters on the second- and third-story front windows appear to be a yellow-green (probably because the postcard is discolored by time).

This writer does not know whether the building on the postcard is Centennial Hall or a later replacement.
Clinton’s 2006 town comprehensive plan lists the Grange hall as one of the town’s significant buildings, and says the Historical Society’s records are kept at the Brown Memorial Library (the library is the only Clinton building that is on the National Register of Historic Places).

A long-time resident says the former Grange Hall is now an apartment building.

The second Clinton Grange #287, according to state corporate records, was organized July 15, 1949, and dissolved Sept. 6, 2006, for failure to file state-required annual reports. An on-line history refers to a Grange and 4-H exhibition hall built in 1994, giving no details.

PHOTOS: Winslow youth baseball, softball gear up for season VETERANS CORNER: Those we used to depend on, now need our help
Scroll to top