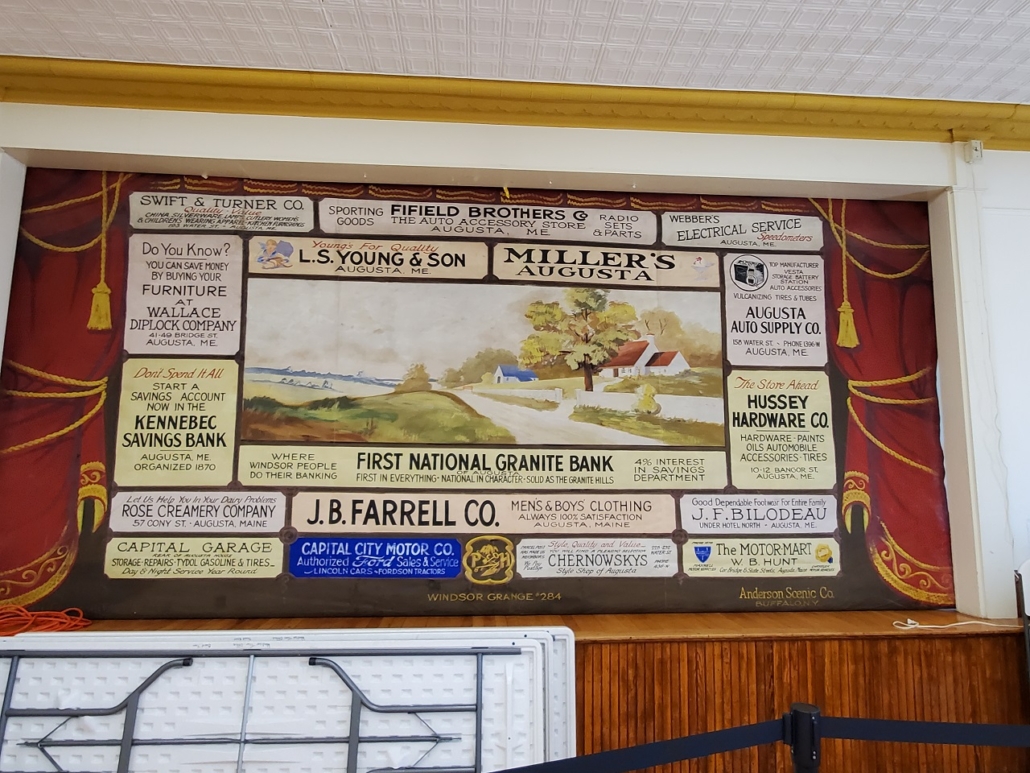 The curtain on the stage of the Windsor Grange. (contributed photo)

In addition to the East Vassalboro Grange discussed last week, Vassalboro had two other Grange organizations. According to Henry Kingsbury’s Kennebec County history, the earliest of the three was Oak Grove Grange #167, organized in North Vassalboro on May 11, 1875.

It is possible that Oak Grove Grange was discontinued before or about 1900. It is not listed in available on-line state Grange documents from 1902.

Kingsbury wrote that Cushnoc Grange members built their hall in 1879, naming it Liberty Hall. It burned in May 1885.

In 1886, Robbins wrote, Howard H. Snell and Hartwell Getchell, “Directors of the Cushnoc Grange Corporation,” paid James Robbins $175.74 for the building that had been a broom factory, a multi-family tenement, the post office (until 1856) and Benjamin Brown’s store. The building stood on a half-acre lot on the east side of “the County Road from Augusta to Vassalboro” and the north side of Cross Hill Road.

Robbins wrote that the deed of sale gave the new Grange Hall the “the right to take water from two wells described in the deed of Malina S. Kimball to Nathan Coombs.”

Grangers enlarged the building and, Kingsbury wrote, opened a store on the ground floor in August 1887. Robbins quoted a source describing a store-keeper in business in the Grange Hall from about 1884 until 1905. At some point the former schoolhouse “across the road” was moved beside the Grange Hall for a horse shed.

After the installation, attendees “repaired to the large dining room connected with the grange hall where a bounteous array of good things had been provided by the ladies of the grange and which received ample justice at the hands of all.”

The writer of the article concluded that in 1894, Cushnoc Grange “has one of the finest grange halls in the State, is prosperous and best of all deserves to be.”

For some years around 1900, Robbins wrote in a 1974 essay republished in the 2017 Anthology of Vassalboro Tales, Cushnoc Grange and Riverside Church each put on a Christmas celebration. In bad weather, she commented, “the long cold drive to the Grange Hall with horse and pung was more hazard than happy,” especially for families with small children. (A pung is a small, box-like sleigh drawn by a single horse.)

Cushnoc Grange hosted fairs with livestock, farm produce and handiwork; oyster stew suppers; and baked bean dinners where neighbors shared “great jars of home made pickles and dozens of apple pies.” The Grange folded in 1967, Robbins wrote. Possessions included “dishes to serve more than one hundred” that were given to Riverside Church. The hall was demolished and a house built on the lot.

The University of Maine’s Raymond H. Fogler Library’s special collections has boxes of Grange documents. According to the on-line catalog, contents include Cushnoc Grange secretary’s records from 1876 to 1914 and from 1926 to 1966.

Colburn and Barton received individual mention in Kingsbury’s history. Frank Colburn was a “farmer and school teacher”; he started teaching winters when he was 18, and was Windsor’s supervisor of schools in 1888 and 1889.

Barton was the great-grandson of Dr. Stephen Barton, who came to Vassalboro in 1774 and moved to Windsor in 1803 to join one of his sons there. John Barton was another schoolteacher; he married Ellen Goddard, of China. Their daughter was a teacher, and their son, who died in 1890 at the age of 27, had headed the commercial department at Kents Hill School.

Windsor Grange had 105 members in 1902, according to Maine State Grange records. Records at the Fogler Library are dated from 1888 to 1995.

Although Linwood Lowden’s Windsor history refers to agriculture in its title, good Land & fine Contrey but poor Roads, he gives the Grange a single paragraph. The Grange “has always rented space in the town hall,” he wrote, paying $125 for the year in 1923, “when the present hall was new.” Another $30 a year went for “space in the G. A. R. Hall.”

Like many other local Granges, Windsor Grange used a large meeting room with a stage, and the stage had a handsomely decorated curtain. Barbara Bailey, from Fairfield Center’s Victor Grange, said when the Windsor town office took over the Grange quarters, the stage curtain was refurbished and remains in the town office.

Winslow, north and west of Windsor, had a 19th-century Grange organization, Winslow Grange #320, which left almost no records to which this writer has access. According to lists of documents stored at the Fogler Library, the collection includes secretary’s records from 1894 to 1972; the earliest account books that have been preserved there date from 1896.

In 1902 Kennebec County Deputy M. F. Norcross of the state Grange wrote that Winslow Grangers “built the fine hall this year, which shows that they are prosperous and progressive.” At that time the Grange had 221 members.

Readers looking for more information on Winslow Grange might try to reach the Winslow Historical Preservation Committee, the town committee that succeeded Winslow Historical Society. The committee’s website is https://winslowhistory.weebly.com, and it has a Facebook page.

A second Grange in Winslow, Progressive Grange #523, was chartered as a Maine non-profit corporation on Oct, 2, 1914. Clyde G. Berry, at 5 Mar Val Terrace, was listed as the corporation’s registered agent.

MaineCorporations records on line skip from the 1914 filing to July 3, 1979, when a registered agent and address (not given) were filed. In 1981, the organization was sent a notice for failing to file its annual report.

In March 2009 a report was filed by a new agent and the corporation was reinstated, after having failed to file a 2008 report. In September 2010 it was again dissolved for another failure; a new agent got it reinstated in December 2010.

He (or she) was equally lax, however, because Progressive Grange was administratively dissolved in August 2011, reinstated in 2012, and dissolved for the final time in August 2013.

Clyde G. Berry was also the first agent for Pleiades Grange #355, organized in Augusta on August 28, 1987. Berry’s address was then given as an Augusta post office box.

Pleiades Grange went through a series of suspensions and reinstatements until it was suspended for good in July 1999.

He was born in Glenburn, attended Bangor High School, graduated from Higgins Classical Institute (a boarding school in Charleston) and attended Husson College and the University of Maine. The obituary says he “worked for several banks before his retirement.”

The Grange was important in Berry’s life. In 1961 he joined Glenburn’s Pleaides Grange, of which he was Master for some years. He later joined and held offices in Mt. Phillip Grange, in Rome. He held offices in three Pomona (county) granges, Penobscot, Sagadahoc and Lincoln.

In the national Grange, Berry was a member of the Assembly of Demeter, held the positions of Steward in 1991 and Lecturer in 1997 and worked for the organization as program resource director.

At some time he lived in Vermont, where the obituary says “he was a charter member and Past Master of Upper Valley Community Grange and a charter member and First master of Heart of Vermont Pomona.” He was also a trustee of the village library in Hartford, Vermont, and a “lister” for the town.

He died in Bangor at the age of 71, is buried in Glenburn and requested memorial donations to Taconnett Falls Genealogical Society in Winslow.

Mother’s Day observance in its 113th year GROWING YOUR BUSINESS: Always be asking for references, referrals, recommendations,...
Scroll to top