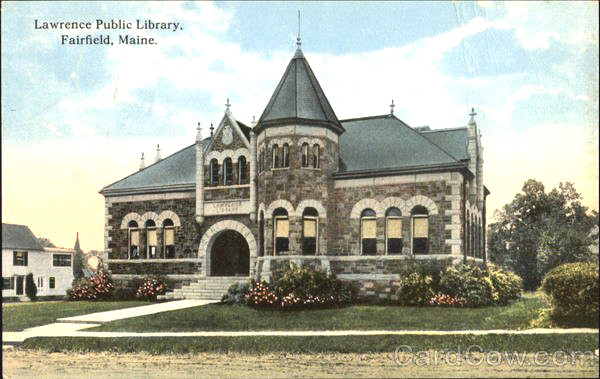 The Lawrence Library, in Fairfield.

In Fairfield, according to the Historical Society’s bicentennial history, town meeting first appropriated money for schools in 1793, five years after the town was incorporated. As in other towns, schools were based in neighborhood school districts. The history says in 1904 there were 25 schools within the town boundaries.

The first high school classes were in 1873, in “part of the already existing grammar-school building…at the corner of Main Street and Western Avenue.” Voters raised $500 for high-school education. This building was presumably the one that was North Grammar School by the middle of the 20th century, and now houses businesses.

In 1881, an article asking voters to build a separate high-school building was on the warrant for the March town meeting. Voters passed over – did not act on – it.

The history says a building for Fairfield High School was built in 1890-91, on Burrill Street (which is at the south end of the business district, running west from Water Street across Main and High streets to West Street). It cost $5,000 and “served the Town until Lawrence High School opened in 1907.”

After 1907 it became South Grammar School, on the north side of Burrill Street between High and West streets. It is now an apartment building.

The 1907 Lawrence High School was a brick building on the west side of High Street, facing Memorial Park. It opened on Sept. 21, with the more than $60,000 construction cost paid by Edward Jones Lawrence.

Lawrence had made a fortune in lumber, street railways, shipbuilding and other ventures. Readers will see more about him in a future article, because Fairfield’s Lawrence Library is also named in his honor.

The Fairfield history says Lawrence’s fortune was drastically reduced in the global financial panic in 1906-1907. He kept his promise to build the high school by “mortgaging his home and borrowing against the schooners” – six-masted schooners built in Bath in which he had invested.

The Fairfield town report for the year ending Feb. 28, 1926, includes financial information on rebuilding. The town borrowed $50,000, with repayment beginning Jan. 1, 1927, and got more than $57,000 from insurance. The “contract price for construction” of $103,446 covered payments to the architect, contractor, electrician and plumber.

The report from the new Lawrence High School Principal, Edward S. Young, in the same town report said that the school “opened September 14 [1925] in its temporary quarters in the Opera House with an enrollment of 204.”

(The Fairfield Opera House was built in 1888, supported by Amos Gerald [1841-1913], “the Electric Railroad King,” another local boy who made good. It was “demolished in 1961 to make way for the present modest municipal building,” which is at 19 Lawrence Avenue. Lawrence Avenue runs from Main Street at the end of the Kennebec River bridge up hill past the library to High Street.)

Young continued: “Your principal has made a determined effort to make the scanty equipment in the Opera House adequate for a good school and he feels that real work is being done in spite of adverse conditions.”

An innovation was provision of a hot lunch twice a week, at cost, “through the cooperation of the domestic arts department,” for students who did not go home during the noon break.

The 1925 school routine included 10 a.m. daily chapel, with two hymns, the Lord’s Prayer and a Bible reading. Outside speakers were invited every Wednesday. To prepare students for public speaking, “Three times each week a student gives a declamation before the entire school. He is introduced by a fellow student.”

When yet another new Lawrence High School was completed in 1960, the 1907 building became a junior high school. It is now Fairfield Primary School, serving students in pre-kindergarten and kindergarten.

In Palermo, historian Milton Dowe found early settlers had many children – John Cain had 18; Amasa Soule 13; Jacob Worthing 12, five of them born before 1800. Primary schools were in existence before 1811; that year, seven school districts were created.

By 1886, Dowe wrote in his 1954 town history, Palermo had 17 schoolhouses. “At this time several of the elementary schools also held terms for free high school classes,” he added.

Millard Howard’s 2015 history said Palermo’s 17 school districts never operated simultaneously; and he said not all districts hired a teacher for every term. His book includes a paragraph on high schools, in which he wrote that Palermo offered none until after Maine’s 1873 Free High School Act.

By 1888, eight Palermo school districts offered high school courses, Howard wrote, the first established in 1882. He explained, “This meant that these districts were occasionally providing a ten-week high school term. There was no fixed course of study.”

Howard found an 1893 Kennebec Journal reference to a free high school at Carr’s Corner ending a term at the end of April. Carr’s Corner, on North Palermo Road, was the site of the schoolhouse for District 13, which was organized in the 1830s and lasted until Palermo school districts were consolidated in 1953.

Alice Hammond wrote that the Town of Sidney never provided a town high school. There were primary schools from 1792, when Sidney was separated from Vassalboro.

Hammond did not say what opportunities for higher education were offered in the 1800s. Nor does Henry Kingsbury’s Kennebec County history have any information; in a half paragraph about education in Sidney, Kingsbury wrote that by 1891, the number of school districts was cut from 18 to 14 because there were so few students.

From 1906 on, Hammond wrote, Sidney paid students’ tuition to out-of-town schools. The majority chose the public high school in Augusta, Belgrade or Oakland or Oak Grove Seminary, in Vassalboro.

Barzillai Harrington, who built an Academy in Branch Mills Village, in China, in the 1850s, was, according to on-line genealogies, born in Tinmouth, Vermont, June 13, 1819; or in Sherburn, Massachusetts, in 1816.

The genealogies and the Maine Historical Magazine, Vol. 1 (1886) identify him as a son-in-law of Shepard Bean (July 16, 1784-1847, the 12th of 14 children of Joshua and Mary Bean). Shepard Bean was born in Readfield, and his wife Jerusha (Hayward) (d. 1876), was from Easton, Massachusetts. Shepard and Jerusha Bean had five children, born in Readfield.

The three older Bean children all found spouses in Readfield. The younger of the two daughters, Lucy Ann, born May 20, 1828, married Barzillai Harrington on Oct. 12, 1843.

(Lucy’s younger brother, Alvin S. Bean, married Phebe Snow, of China, according to the magazine; or Phebe Worth Jones, of China, and after her death a widow named Lizzie [Erskine] Tyler, according to one genealogy.)

Their second son, born Nov. 30, 1845, was named Barzillai Shepard Harrington after his father and grandfather. The genealogies offer no further information.

The magazine article identifies the senior Barzillai Harrington as “from China” and adds: “He built the Lowell, Me., tannery.”

Milton Dowe offered one more clue to the family when he wrote in his Palermo Maine Things That I Remember, in 1996 that “The Branch Mills Sewing Circle was organized at the home of Mrs. B. Harrington in 1853” and went on to list the officers, including “Mrs. L. Harrington,” secretary.

Lowell is a small Penobscot County town, east of Passadumkeag, south of Lincoln. Ava H. Chadbourne’s book on Maine place names says it was Page’s Mills Plantation in 1819 or soon thereafter; then Deanfield Plantation; and Huntressville when incorporated as a town in 1837. It became Lowell in 1838, reportedly to honor Alpheus Hayden’s son Lowell Hayden, the first male child born in the town.

Chadbourne has no Harringtons on her list of early Lowell families. She wrote that Alexander Webb, a New Yorker who had managed tanneries in other Maine towns, “superintended” the building of a large one in Lowell after he moved to town in 1856.

Did, then, the senior Barzillai Harrington literally build the tannery, with Webb overseeing his work? If so, why and how did Harrington switch from running a high school in China to building a tannery in Lowell, a hundred miles away?

Lowell was not his farthest journey. One on-line genealogy says he died May 13, 1885, in Harvard, Nebraska; another says he died in 1881. Lucy survived him, and also died in Nebraska, according to one source.

Here is another update on a prior topic, Victor Grange #49, in Fairfield Center, described in the May 13 issue of The Town Line.

The Grange’s Fall 2021 newsletter reports the successful completion of the effort to raise funds to insulate the building. The money is now in hand, and, the newsletter says, “Northeast Poly Insulation [of Fairfield] will start the job shortly.”

Grangers also obtained the advice they needed on ventilating a well-insulated building. The report says D. H. Pinnette Roofing, of Oakland, “will install six turbine vents, this should do the trick.”

The Grangers expect the insulation will much improve heating in the building and allow more programs. People are invited to suggest programs they would enjoy.

The newsletter lists Grange programs and events. They are open to anyone interested, whether a Grange member or not.

Vaccination clinics are scheduled from 8:30 to 11 a.m. Thursday, Oct. 6, and Thursday, Oct. 28. The Grange Hall will host Northern Light Health personnel administering the Pfizer vaccine against Covid and the quadrivalent flu vaccine, which offers protection against four different strains of the influenza virus.

The annual Grange Fall Fest and Craft Fair is scheduled for Saturday, Nov. 13, from 9 a.m. to 2 p.m.

Bridge lessons are offered Mondays from 10 a.m. to 1 p.m. The newsletter says the original turnout of two tables (eight players) has already doubled some days as more people hear of the chance to learn this card game.

Grange members are looking for help with two more projects, one needing money and the other expertise.

They would like to buy an Automatic External Defibrillator (AED) to provide emergency help to a heart attack victim. The cost is listed as $1,300; donations are welcome. The newsletter requests checks made out to Victor Grange 49 AED Fund and left at the Hall, at 144 Oakland Road in Fairfield Center; or mailed to Victor Grange 49, c/o Roger Shorty, 118 Oakland Road, Fairfield ME 04937.

For the Nov. 13 Fall Fest, Grangers are looking for someone who can sharpen knives and scissors, for a fee. Anyone interested can get in touch through Roger Shorty or by emailing Victorgrange49@gmail.com.