Rufus Matthew Jones was a South China farmer’s son who became internationally renowned. Here is the story of his early life, mostly as told by himself in two of his many books.

Rufus Matthew Jones was born Jan. 25, 1863, in South China, into a Quaker family. The Encyclopedia Britannica’s online version calls him “one of the most respected U.S. Quakers of his time.” Wikipedia more comprehensively lists him as an “American religious leader, writer, magazine editor, philosopher, and college professor.” 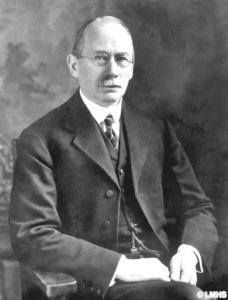 In two autobiographical books, Finding the Trail of Life (1931) and A Small Town Boy (1941), Jones describes growing up in South China in the last quarter of the 19th century.

The Quakers, or Society of Friends, have been represented in the area, especially in Vassalboro on the west side of China Lake, since the earliest settlers arrived in the 18th century. (Earlier in this series, in the history of Fairfield, printed in the April 16 issue of The Town Line, the connection between the Vassalboro and the Fairfield Friends was briefly described.)

Rufus Jones’ paternal grandparents were Abel and Susannah Jones. Rufus’s father, Edwin, was their youngest son, born in 1828. In 1815, Abel Jones built the family house on Jones Road where his grandson Rufus was born and raised.

Edwin’s oldest brother was Eli Jones, born in 1807. He married Sibyl Jones, from Brunswick, in 1833; the two were famous for preaching and practicing Quakerism in eastern Canada, Europe, Africa and the Middle East in the mid-19th century. They spent enough time in China to be important influences in their nephew’s life. One of his many books is a biography of his aunt and uncle.

Rufus Jones’ family and their religion emerge as the most important influences in his life. The family consisted of his grandmother Susannah (Abel Jones died in June 1853 and is buried in Dirigo Cemetery, one of several Quaker burying grounds in China); his parents, Edwin and Mary (Hoxie) Jones; his father’s sister, Aunt Peace, born in 1815; his older brother, Walter, and older sister, Alice; and a younger brother, Herbert.

Rufus Jones admired and loved the two senior women in the household. He describes his grandmother as a hard-working housewife who still had time to tell her young grandson exciting stories of China in the old days, full of Indians, bears, hard winters and other travails. He sees Aunt Peace as a beneficial influence, kind, wise, sometimes prophetic and mystical, on daily speaking terms with God. He marvels that no man was discerning enough to marry her.

Despite living with these two strong minded older women, Jones’ mother was the head of the household, he says. He describes her as tender, loving, always knowing the right way to make a bad situation better. She was the disciplinarian more than his father, he says; both disciplined by example and words, never with force.

Jones describes a typical family day as beginning with the family gathering to hear his mother read a Bible chapter, followed by a quiet period, a miniature of the old-fashioned Quaker meeting at which everyone sat in silence feeling God’s presence. One of the family would then talk with God on behalf of the group. Although the day’s house and farm work lay ahead, Jones found these shared moments of religious tranquility anything but wasted time.

The community Quaker meetings the whole family attended faithfully were important in Jones’ whole life, and the one-room schoolhouse where he started his education at the age of four was useful. The two other groups he describes in writing about his childhood were the boys with whom he ran and the men who spent their free time talking in the country store.

The boys, as he describes them, were a mixture of Quakers and non-Quakers who did typical energetic country-boy things, swimming and fishing, sledding and skating, playing games outdoors and in barns. Looking back, Jones realized that he was the group’s unofficial leader. If he had farm chores to finish before he could play, his friends would wait for him or help him; when they debated what to do next, he often had the deciding voice.

As soon as he was old enough, Jones used to get the family mail at the general store, where he lingered to listen to the talk around him – jokes and tales, review of national and local events. When he learned to read confidently, he acquired a leadership role there, too. The men would have him stand on the counter and read aloud to them newspapers, political broadsides and, when the world was quiet, favorite authors like Mark Twain and Artemus Ward.

In both books about his youth, Jones describes his tenth year as a turning point in his inner life. That summer he bruised his foot; the bruise became an infection; the country doctor who punctured it with an unclean lancet gave him a more serious infection that almost cost him his foot and his life.

Jones spent nine months as an invalid, the early weeks in constant pain and frequent fear of death. His grandmother, aunt and mother were his as consolers and companions. He credits his grandmother with recommending he read the Old Testament, often out loud while she listened; the two discussed it at length. Aunt Peace offered him the hope he needed when he felt sure he would die. His mother’s love constantly sustained him. And during his hours alone, he became more aware of what he calls the unseen world, of God’s presence, of moral values.

Many Maine Quakers, like Eli and Sybil Jones and later Rufus Jones, traveled widely. Even gentle Aunt Peace made a religious journey to the mid-West when Jones was very young. These local travelers returned at intervals, and other Friends from away came to China. Nonetheless, South China was basically an isolated country village when Jones grew up there.

He praises the chance to live in the outdoors with China Lake and its in-flowing brooks, the views of distant mountains, the wild flowers and the birds. A trip to Augusta in a horse-drawn wagon was an all-day event; and despite the wonders there, like the Kennebec River, the state house and the courthouse, the stone buildings and perhaps a railroad train, young Jones felt sorry for city boys.

When Jones was 14, he spent a term at what was considered a better grammar school in Weeks Mills Village, a six-mile round-trip walk. Here, he writes, for the first time he had a teacher who was able to introduce him to physics and physiology, though without anything resembling a science laboratory.

The next year, 1878, he spent 11 weeks at the Quaker high school then called Oak Grove Seminary, in Vassalboro (the former campus currently houses the Maine Criminal Justice Academy). This school was 10 miles from South China, so Jones was one of many students who boarded there during the week and went home on weekends. At Oak Grove, he wrote, he was able to study Latin, to advance in mathematics and English and to learn astronomy (though without a telescope).

In the summer of 1879 he decided he needed more education and applied to the Friends School, in Providence, Rhode Island. He was accepted and given a full scholarship.

His first year was briefly interrupted when his mother died in April. He describes how this loss almost destroyed his faith, but memories of her love and her faith saved him.

Jones graduated from Providence Friends School in 1881, took a post-graduate year to improve his Greek to college standards and in 1882 entered Haverford College as a sophomore. There he began his life’s work.

Next week: the rest of the story.