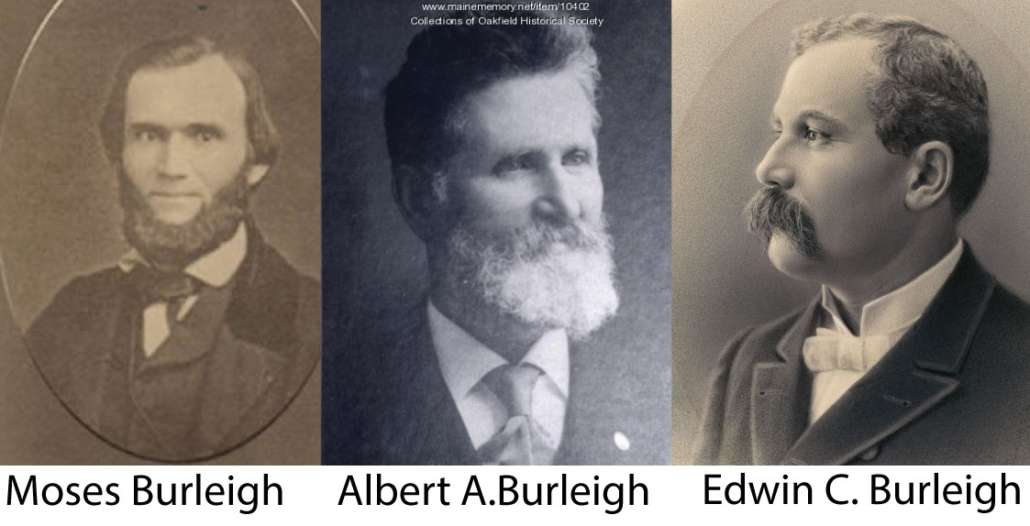 The Burleigh (sometimes spelled Burley) families were among the earliest to settle in the Kennebec Valley. One of Palermo’s early settlers was Moses Burleigh, and there were 19th-century Burleighs in other area towns.

Millard Howard, in his Palermo history, said the Palermo family had been in America since 1648, when a Burley ancestor lived in Ipswich, Massachusetts.

The first generation of these Burleighs: Moses, in Palermo and Linneus

(Your writer questions the marriage date. Children were born out of wedlock in Maine in the early 1800s, and sometimes acknowledged by their fathers; and they were born less than nine months after a wedding. But three children born and one conceived, and then the wedding? – an unusual series of events.)

Dowe called Moses Burleigh “the most prominent man in this section of the state.” He was a militia captain in the War of 1812 and led his troop to Belfast when the British landed at Castine in September, 1814. In 1816 he was promoted to lieutenant colonel.

Burleigh chaired the Palermo board of selectmen “for many years” and was a justice of the peace and a deputy sheriff, according to Dowe and Howard. He served in the Massachusetts General Court for three years.

By 1816, the majority of Palermo voters favored statehood for Maine. Two public meetings that year produced pro-statehood votes. At the second one, on Sept. 2, the vote was 78 to 20, according to Howard, and voters chose Burleigh to represent the town at a convention in Brunswick called to write a Maine constitution.

After Maine became a state in 1820, Burleigh was a member of the Maine legislature for three years. He was also a mail carrier between Augusta and Bangor, first on horseback and later by carriage.

In 1830 or 1831 the Burleighs moved to Linneus, an Aroostook County town southwest of Houlton. There, Howard wrote, Moses Burleigh “continued to hold important positions in state, county and the militia.” An on-line Linneus site lists the positions as including census taker, land agent responsible for evicting Canadian trespassers from land claimed by Maine and postmaster at Linneus.

Moses and Nancy Burleigh’s son, Parker Prescott Burleigh (May 16, 1812- Apr. 29, 1899), Dowe described as a “prominent statesman.” On-line sites say he was a surveyor, civil engineer and farmer, well-informed about Maine timberland. They list some of the town and county positions he held, including town clerk, treasurer, tax collector and school board chairman; and county commissioner and treasurer.

Parker Burleigh was North Linneus postmaster for 25 years, and represented the town in the Maine House of Representatives in 1856 and the area in the Maine Senate twice, in 1864 and 1877.

Parker and Caroline’s older son, Albert Augustus Burleigh (Oct. 12, 1841 – 1916) served in the First Maine Cavalry in the Civil War. He was wounded at least twice and imprisoned in the Confederacy. He and his wife, Lucinda Collins, had five sons and one daughter born between Novem­ber, 1862, and October, 1874.

Albert Burleigh was a state senator early in the 1900s, from the Houlton/Oakfield area. He and his brother Edwin were among those who supported extending Bangor and Aroostook Railroad service into Aroostook County. He died in Houlton about 1918.

(Your writer found no exact date for Mary Jane Burleigh’s death. A May 2, 1916, clipping from the Portland Express-Advertiser, found on line, says Senator Burleigh’s wife “is dangerously ill and is not expected to recover” after a “serious collapse” on May 1.)

A detailed on-line biography from 1909 says Edwin Burleigh would have enlisted for Civil War service with his brother, but was rejected for (unspecified) health issues.

Instead, he spent the war as a clerk in the state adjutant general’s office. Then he returned to surveying and farming until 1870, when he accepted a clerkship in the state land office in Bangor (where, according to Louis Hatch’s history of Maine, his father was the land agent).

In 1876 he was appointed state land agent, and also, according to the on-line biography, assistant clerk in the Maine House of Representatives. These jobs led the family to move to Augusta, either in 1876 or in 1880, when he became a clerk in the state treasurer’s office (sources differ).

From 1884 to 1888, Edwin Burleigh was state treasurer, “an office that he filled with conspicuous ability and success,” according to the on-line biography. He ran successfully for governor in the fall of 1888 and was re-elected two years later, serving as Maine’s 42nd governor from January 1889 to January 1893.

The biography says his administration was “pre-eminently constructive and progressive in character.” A list of accomplishments starts with blocking a proposal to relocate the state capital to Portland and instead overseeing enlargement of the state house, thereby saving taxpayers “at least two million dollars.”

In 1892 Edwin Burleigh ran for the U. S. House from Maine’s Third Congressional District. He lost to incumbent Seth Milliken, of Belfast; but when Milliken died in office in 1897, Burleigh was chosen as his successor. He served from June 21, 1897, until he lost a 1910 re-election bid and was replaced on March 3, 1911; the 1909 on-line biography says his “ability and usefulness have been conspicuous.”

Hatch wrote that “he was very successful in obtaining public buildings for his district.”

Meanwhile, in 1887 he had purchased Augusta’s Kennebec Journal, so in 1911 he turned his attention back to the newspaper and to managing forest land he owned in Aroostook County. The biography adds that his older son, Clarence Blendon Burleigh, was the paper’s managing editor in the early 1900s.

In the fall of 1912 Edwin Burleigh was elected to the U. S. Senate, taking office March 4, 1913. He did not finish his Senate term; he died in Augusta on June 16, 1916. He, his wife and other family members are buried in Augusta’s Forest Grove Cemetery.

Edwin and Mary Jane Burleigh’s older son was Clarence Blendon Burleigh (Nov. 1, 1864 – 1910), born in Linneus. He attended local schools in Linneus and Bangor, and graduated from Hampton Literary Institute in 1883 and from Bowdoin College in 1887.

After a summer as “editor of the Old Orchard Sea Shell, which was published by the Biddeford Times until the close of the beach season,” Clarence Burleigh came back to Augusta and joined his father’s Kennebec Journal venture. His career included 10 years (1896-1906) as state printer.

He and his younger brother Lewis were Republicans, active Masons and Congregationalists.

Clarence Burleigh’s younger brother, Lewis Albert Burleigh (March 24, 1870 – 1929), was born in Linneus; the family moved to Augusta in time for him to graduate from Cony High School in 1887. He followed his brother to Bowdoin, graduating in 1891, and earned his law degree from Harvard Law School in 1894.

He was immediately admitted to the Kennebec Bar and went into practice with his brother-in-law, Joseph Williamson (husband of his older sister, Vallie Mary). The on-line biography says as of 1909, “The firm has taken a leading position among the lawyers of the state, doing a general and corporation business.”

This source says Lewis Burleigh had been Augusta city clerk and was in his second term as one of three United States Commissioners. (Another on-line source explains that United States Commissioners are appointed by district court chief judges to “perform judicial functions for the federal government” similar to those performed by state “magistrates or justices of the peace.”)

In 1909 he was also on Augusta’s board of education and representing the city in the state House of Representatives.

The senior Lewis Burleigh got a Nov. 12, 1929, obituary in The New York Times, in which he was identified as an “Attorney and Former Legislator of Augusta, Me.”

Donald Quimby Burleigh is identified as a novelist and, with his wife Mary (Johnson) Burleigh, “a New England champion bridge player.” Donald and Mary Burleigh had four daughters and no sons. 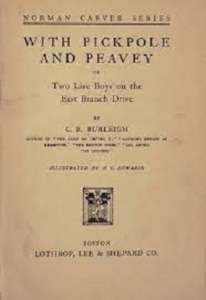 One website lists several books written by Clarence Blendon Burleigh. Your writer was surprised to find available on line copies of:

— Bowdoin ’87: A History of Undergraduate Days : Together with Brief Sketches of Members of the Class Since Graduation, published in 1900 by the Kennebec Journal Press;

— Raymond Benson at Krampton, published in 1907 by Lothrop, Lee & Shepard of Boston, with two young men ready for a baseball game on the cover; and

— The Kenton Pines, or Raymond Benson in College, also published in 1907 by Lothrop, Lee & Shepard. The forgottenbooks.com website categorizes its reproduction of the novel as “childrens” and says it is 412 pages long.