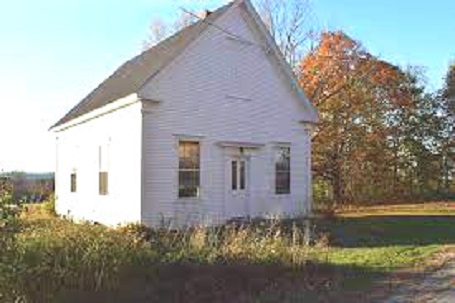 Remaining to be described is Tiffany Chapel, sometimes called Tiffany Hill Chapel, at 544 Tiffany Road, in Sidney. It was built as a Methodist church in 1881 and added to the National Register on Oct. 4, 2018.

The Methodists were prominent in Maine from the late 1700s. They were briefly mentioned earlier (see the piece on Fairfield in The Town Line, April 16, 2020).

Jesse Lee, the famous Methodist preacher who led meetings in Fairfield Center and Kents Hill in 1794, also stopped in Sidney. Kingsbury wrote in his Kennebec County history that Lee “planted” Methodism in Sidney on Jan. 29, 1794.

Methodists were active in Sidney from then on. Michael Goebel-Bain, now the Maine Historic Preservation Commission’s Historic Preservation Coordinator for the National Register, wrote in his 2018 National Register application for Tiffany Chapel that because Sidney Methodists were less numerous than those in nearby towns, they were often part of the Fairfield (1837 to 1845, according to Kingsbury) or Readfield (1847 to 1850) circuits, or combined with North Augusta (1860 to 1874) or Oakland (1874-1904) congregations.

There were, however, two early Methodist churches in Sidney, mentioned by Kingsbury and Goebel-Bain and in Alice Hammond’s history of Sidney.

The first was built in 1815 in southern Sidney, Goebel-Bain wrote. Hammond located it at Bacon’s Corner.

The second Sidney Methodist church was the 1828 building that Kingsbury described as ‘the largest house of worship ever in town.” That church was “about three miles north” of the Bacon’s Corner one and had a Paul Revere bell, according to Hammond.
The 1828 building was moved about a mile in 1845 and became a Union church, Kingsbury said. Hammond repeated the story that the big building “was attached to two long skids” and moved by 100 pairs of oxen, 50 to a skid.

Its new site was on land whose owners or heirs were allowed to reclaim it when the building was no longer used for religion. The owners exercised their right around 1880, Kingsbury said.

Hammond retold an interesting story of the Sidney Grange being frustrated in its effort to buy the building when one of its own members, planning to use it for a hay barn, bought the pew-holders’ rights for himself. He was expelled from the Grange.

Not long afterwards, Hammond wrote, the Revere bell was stolen from the barn, allegedly by two men, maybe Grangers, driving a double-horse team pulling a sled with a blanket-wrapped burden. Later, two men, with a similar team and sled, chopped a hole through the ice on the Kennebec River and dumped a blanket-covered object.

In 1892, Kingsbury wrote, the 1815 building was still a church but no longer Methodist: a Congregationalist minister, Rev. Henry Loring, had been preaching there for a year, “greatly to the satisfaction of the people in that section.”

Goebel-Bain, however, wrote that by 1880 both early churches had been “sold for other uses or destroyed.”

Goebel-Bain and Hammond credited Oakland pastor Rev. M. E. King with inspiring Sidney Methodists to build their own church. Hammond referred to a revival; she and Goebel-Bain wrote that in August 1881 the Sidney Methodists incorporated as an independent parish, with King preaching in both towns.

Henry Goodhue donated the land, Hammond wrote – the lot is about one-third of an acre. The committee, meeting in Tiffany School, agreed on a plan by Aug. 20, according to Hammond, and the new church was dedicated Dec. 11. Goebel-Bain added that the school continued to be used “as an auxiliary support building for church events.”

He identified the building as historically significant both in its original 1881 form and after major alterations in 1911. Throughout his application he emphasized its small size, lack of ornamentation and other characteristics of a building designed for a small, rural, low-income congregation.

The original building, he wrote, is an example of one of the designs the Methodist Church Extension Service sent out in the latter half of the 19th century, when new congregations were being established in many places. It represents “the smaller type of modest rural church building.”

The major 1911 change was the installation of pressed metal interior walls. Goebel-Bain wrote that the original wall material is not recorded.

The new walls he considered “compatible with the original construction period.” He continued: “[T]he overall 1911 appearance reflects the small modest church of a small rural congregation.”

Later changes he described included reducing the height of the chimney, installing a tile ceiling below the original ceiling and adding asphalt roof shingles and aluminum storm windows.

Goebel-Bain described a single-story, east-facing, one-room wooden building on a granite foundation, with a steeply-pitched gable roof, no steeple and a brick chimney. It is 28 feet wide and 36 feet deep. The cornices above the front door and window “are vaguely reminiscent of the Italianate style, but the building is otherwise devoid of architectural detail on the exterior,” he wrote.

The narrow front door is wooden on the bottom and has two tall, slender windows in its top half. There is a rectangular window on either side of the door; a similar window in the gable above has been filled in with clapboards.

Each side of the buildings has two windows. Goebel-Bain called the back (west) wall “a mirror image” of the front except there is no door, and because the land slopes downward to the west, more of the foundation is visible.

The front door leads into a small “trapezoidal plan vestibule” with wooden doors set in angled walls and a nine-foot ceiling. The doors open into the single room that is the body of the chapel, with a 14-foot ceiling, painted wooden floor and “painted pressed metal” walls and ceiling.

The metal walls are sectioned, for example by a chair rail at the height of the bottoms of the windows, and have “three colors and two designs,” Goebel-Bain wrote.

In the west end of the room is a carpeted platform raised eight inches above the floor. It has a wooden railing across the front, with breaks at either end before lower metal railings covered with cloth connect to the wall on either side.

When Goebel-Bain wrote his description, the room had rows of “open back benches” facing the platform; whether they were original, he did not know. He deduced from the lack of marks on the floor that there had never been fixed seating, in the body of the room or on the platform.

A wood stove near the vestibule provided heat.

Goebel-Bain described the ceiling he saw as “covered with square acoustic ceiling tile in poor condition.” Four lights hung down from it, he wrote. He twice mentioned plans to redo the ceiling to make it more compatible with the historic building.
Despite the modern additions, Goebel-Bain saw Tiffany Chapel as well worth a place on the National Register. “Both interior and exterior are in good condition and retain a high degree of integrity,” he wrote.

And, he concluded, “Compared to other local churches the integrity of design, materials and workmanship is high. Location is intact and setting is largely unchanged from 1881. Although the house to the east is modern, the general setting remains open fields and woods with two farm residences nearby. Feeling and association are high as well.”

In 1967, Hammond wrote, Tiffany Hill Chapel and Oakland’s Dunn Memorial Church merged to create the Oakland-Sidney United Methodist Church. Tiffany Chapel was used only for summer services by the time her history was published in 1992.

1) The First Amendment Museum in Augusta (see The Town Line, Nov. 12, 2020), based in what was once the Guy Gannett house, on State Street, has been awarded $249,000 from the Institute of Museum and Library Services to expand its exhibit space. An early-August notice said the grant will help turn the house “into a 21st-century museum,” according to the museum website.

Genie Gannett, Guy Gannett’s granddaughter, and her sister bought the house late in 2015 and started the museum. Genie Gannett, now president of the board of directors, expressed gratitude to the Institute.

“This major grant will help us create a visitor experience that is unique, interactive, and relevant,” she said.

The website firstamendmentmuseum.org offers more information on the museum’s history, activities and staff, an invitation to sign up for a e-newsletter and instructions for making donations to this 501(3)(c) non-profit organization.

2) At a recent open house in Victor Grange in Fairfield Center (see The Town Line, May 13), members showed off recent improvements, especially the new parking lot, and talked about their next projects. The latter include insulating the building, which dates from 1903; restoring the canvas stage curtain; and restoring the colored tin ceiling.

Victor Grange welcomes new members. Grange meetings are held in the hall the second Monday of each month, following a 6 p.m. potluck meal.

People looking for more information or wanting to assist with the on-going fund-raising are invited to e-mail Victorgrange49@gmail.com, or to call 453-9476. The Grange also has a Facebook page.

MY FIRST and MY LAST DAY with GRANDMA COOLIDGE

YOUR GRANDMOTHER- A MEMOIR OF MATTIE COOLIDGE CRAWFORD

Several of Mattie’s beautiful watercolor paintings, including one of Lot Sturtevant’s house, period family photos, some early Coolidge family history in Watertown, MA, and Mattie’s role in her many causes are discussed.

Donations for these books will be dedicated to the Asa Bates Memorial Community Chapel Call Kay Marsh, 1-207-465-7458, or email grammy.kay.cee@gmail.com for further information.

[Editor’s Note: This section has been updated to correct the date on which Genie Gannett, Guy Gannett’s granddaughter, and her sister bought the Gannett family house to 2015, not 1915.]