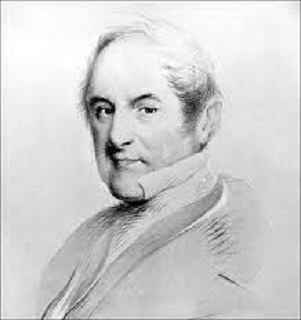 Many historians don’t take the Aroostook War seriously. Several sources call it the Pork and Beans War; Wikipedia says the nickname is based on either the local lumbermen’s or the British soldiers’ staple food.

Some of the local histories cited earlier in this series don’t even mention the war. Alma Pierce Robbins gave it one dismissive sentence in her history of Vassalboro: “The ‘Aroostook War’ of 1839 made no impression upon official Vassalboro, perhaps because it proved to be ‘no war’.”

At the time, though, according to other historians, like James North and Louis Hatch, it was taken seriously by prominent people on both sides, discussed in the United States Congress and the British Parliament. Hatch wrote indignantly that the men who thought they would have to fight deserve recognition:

“Patriotic sons of the Pine Tree State left their homes and firesides in the most inclement season known to our rigorous climate and marched through the deep snows of a wilderness, two hundred miles, to defend our frontier from foreign invasion, when the Federal government was needlessly procrastinating and turning a deaf ear to the cries of suffering and oppressed pioneers in the upper St. John valley.”

The Aroostook War was a step in the boundary dispute between the northeastern United States and eastern Canada that was summarized in The Town Line, March 10, 2022, issue. At issue were about 12,000 sparsely-inhabited square miles claimed by both countries. After years of diplomatic disagreement and competing claims on the ground, both sides sent armed forces to the St. John Valley.

North and Hatch said one early precipitating action was the June 1837 arrest of Mada­waska census-taker Ebe­nezer S. Gree­l­ey, who was acting under authority of the Penob­scot County Com­mis­sioners, by New Bruns­wick Gover­nor Sir John Harvey.

However, Canadian loggers continued to cut timber in American-claimed woods. An on-line DownEast magazine article by Will Grunewald lists two other of the region’s assets: the Aroostook River basin had valuable minerals and good farmland the Americans could use, and the British wanted to maintain a land connection between Halifax on the coast and Québec.

On Jan. 24, 1839, North wrote, the Maine legislature ordered 200 men under Penobscot County Sheriff Hastings Strickland to go north to “arrest the depredators and secure the cut timber.” Hatch added that the legislature allocated $10,000 for the expedition.

Some of the group were arrested and jailed in Fredericton, New Brunswick, Hatch continued. Later in the month, he wrote, Americans arrested two Canadians and brought them to Bangor, where they were not sent to jail but “held in custody in the Bangor House and fared sumptuously.”

The trespassers had prepared themselves with “arms forcibly taken from the government stores in Woodstock,” North said. But Strickland’s troops brought a brass six-pound cannon that outgunned them in an initial encounter.

An on-line New England Historical Society article gives a livelier account, crediting the Canadians’ defeat to an attack by a black bear. The Cana­dians shot the bear – another on-line site calls it the only combat fatality in the whole war. The gunshots sent the two sets of armed men fleeing in opposite directions.

The Canadians recovered, and on Feb. 12 again captured some Americans. After an impressive two days of hard riding, Strickland reported to Augusta. 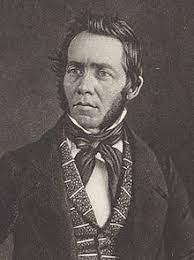 Maine Governor John Fairfield asked New Brunswick officials if they supported the locals. Harvey ordered the trespassers to put back the arms they’d stolen; but he also promised to resist “any hostile invasion” and put his militia on stand-by.

Harvey’s claim of territorial jurisdiction and the Americans’ arrest of a British official led to further troop mobilizations on both sides. The Maine legislature promptly appropriated $800,000 and drafted 10,343 Maine militia.

Historian Ernest Marriner wrote in Remembered Maine that the draft “was scarcely necessary because volunteers poured in from all the towns.”

North wrote that one 50-man company “marched all the way from Augusta to the Aroostook, with the exception of a short ride from Bangor to Oldtown over the railroad.”

More than 2,000 Maine troops went to Aroostook, North wrote, and “The bustle of arrival, equipment and departure of troops, at Augusta, wore a decidedly warlike aspect.” General Isaac Bangs, in Edwin Carey Whitte­more’s Water­ville history, implied that all 10,000 men went north for three months, and emphasized the snow they encountered. Several sources commented on the inadequacy of the uniforms given them. 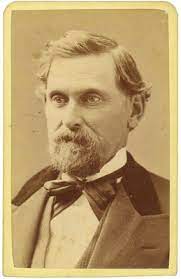 Public opinion was strongly with the troops. Bangs called the populace “aroused” and the legislature “indignant.” The outrage, the New England Hist­orical So­ci­­ety site says, was “led, as usual, by the press.” The writer quoted from a belligerent editorial and said war correspondents accompanied the militiamen.

On the national level, Congress appropriated $10 million and authorized 50,000 soldiers. The New England Historical Society article says both sides built frontier forts, “sometimes within sight of each other.”

United States Secretary of State, John Forsyth, and British Minister in Washington, Henry Stephen Fox, proposed a mutual stand-down, North wrote. Harvey was willing, Fairfield and the Maine legislature were not. About the same time, however, prisoners were paroled on both sides.

On March 5 or 6, 1839 (sources differ), Major-General Winfield Scott, United States Army, and his entourage arrived in Augusta. Their assignment, quoted by several writers, was “maintaining the peace and safety of the entire northern and eastern frontiers.”

Scott asked Harvey, a friend since 1812, to guarantee no more use of military force against Americans in the area, and Fairfield to guarantee the same in regard to Canadians. Harvey agreed again on March 23. Fairfield, whether tired of quarreling or overawed by Scott (one source says the general stood six and a half feet tall), accepted on March 25. The Maine troops went home, except for a few allowed to remain to repel trespassers.

The New England Historical Society article lists two human casualties of the war, neither on the battlefield. A farmer was accidentally shot during militia firing practice, and a soldier died of measles.

This section of the border between the United States and Canada was settled by the Webster-Ashburton Treaty, negotiated by Secretary of State Daniel Webster and British Envoy Alexander Baring, the first Lord Ashburton. It was signed August 9, 1842, and after exchange of ratifications took effect Nov. 10, 1842.

Ruby Crosby Wiggin named two Albion men who participated in the Aroostook War in her history of that town.

One was Rev. Joseph Cammet Lovejoy (1805 – 1871), brother of abolitionist Elijah Parish Lovejoy. A document titled “Historical Sketch and Roster of the Aristook [sic] War” said that he served as a chaplain from Feb. 23 to April 25, 1839, enrolling in Augusta and being discharged in Bangor.

Besse caught typhoid and after he recovered came back south alone, on foot. He stopped in Albion and later married tanner Lewis Hopkins’ daughter Isabelle and founded a locally-influential family.

A Fairfield Historical Society list found on line names 17 men from Fairfield, and a possible eighteenth, who served in the Aroostook War. One was Colonel Nathan Fowler, described in the Fairfield bicentennial history as owner of the 19th-century hotel at Nye’s Corner, which was also the stage stop and home of the post office.

Bangs’ chapter in the Waterville history similarly lists 60 men from Waterville and Fairfield who went north in Captain Samuel Burrill’s company, serving from Feb. 25 to April 19, 1839.

Waterville historian and Colby College Dean Ernest C. Marriner seems to have first met the Aroostook War through the diary of William Bryant, who came to the Nye’s Corner village, in Fairfield, in 1817. In his 1954 Kennebec Yesterdays, Marriner wrote that like many other diarists, Bryant focused on family and local events, but he paid brief attention to the northern boundary in February 1839.

Marriner said Bryant wrote of 200 men already gone north “to fight off trespassers,” another 1,500 started on the way and 8,000 more to be drafted to follow.

The diarist then reported that his wife was mending their oldest son Cyrus’s stockings “and washing them with tears. But Cyrus has returned home and got clear of the draft this time.”

This account seems to have piqued Marriner’s interest, because his 1957 Remembered Maine gives the Aroostook War a full chapter. He began semi-seriously:

“Maine once fought a war in which no one was killed and no battery fired a shot, although snipers took pot shots at the enemy without inflicting serious damage. Today it seems unthinkable that a single state of the Federal Union should make war against a foreign nation, but that is just what the State of Maine did….”

After recapping the history of the events in northern Maine, Marriner turned to General Scott’s initial discussion with Governor Fairfield. According to Marriner, Scott assured Fairfield that if he wanted a war, Maine people would give him one “fast and hot enough”; if Fairfield wanted peace, Scott would try, with “no assurance of success.”

Fairfield opted for “peace with honor” or “peace without dishonor.” In Marriner’s opinion, Scott got it for him.

Marriner then asked whether Fairfield’s political opponents, who blamed the governor for the war and labeled it “Fairfield’s Farce,” had a valid point. In hindsight, he concluded, they did not. He quoted another Maine historian who credited Fairfield with “forethought,” “wisdom” and “statesmanship.”

Winfield Scott (June 13, 1786 – May 29, 1866) was born on a plantation near Petersburg, Virginia, and began a career as a lawyer. By 1807, he was a cavalry corporal in the Virginia militia. When President Thomas Jefferson expanded the national army, Scott used a friend’s influence to become a light artillery captain in May 1808. 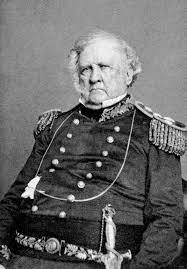 Wikipedia describes his first four years as rocky, to say the least. He quarreled with his commander, was court-martialed for that and for a discrepancy in his recruiting allowance (blamed on careless record-keeping, not theft) and in 1810 was suspended for a year and fought a duel.

He used his suspension to practice law and study “military tactics and strategy,” and rejoined the army in time to become lieutenant-colonel of an artillery unit sent to Canada in the War of 1812.

Briefly a British prisoner in the fall of 1812 (when he and then Colonel John Harvey became friends), Scott served with distinction through the rest of the war. He was promoted to major general and awarded a Congressional Medal of Honor.

After varied assignments, including the 1839 peace-making mission to Maine, in 1841 Scott was made a major general and commander-in-chief of the United States Army. He led the successful invasion of Mexico in the Mexican-American War.

By the time Abraham Lincoln was inaugurated March 4, 1861, several Southern states had already seceded from the United States. Lincoln sent a messenger to ask if the Virginia-born general would ensure his safety during the inauguration.

Wikipedia quotes Scott’s reply proposing to put cannons at both ends of Pennsylvania Avenue if necessary and “if any of the Maryland or Virginia gentlemen who have become so threatening and troublesome show their heads or even venture to raise a finger, I shall blow them to hell.”

Scott was by then in his seventies, too old for active command, and Lincoln did not always heed his advice. He resigned his command in October 1861 and died four and a half years later in West Point, New York, where he is buried.