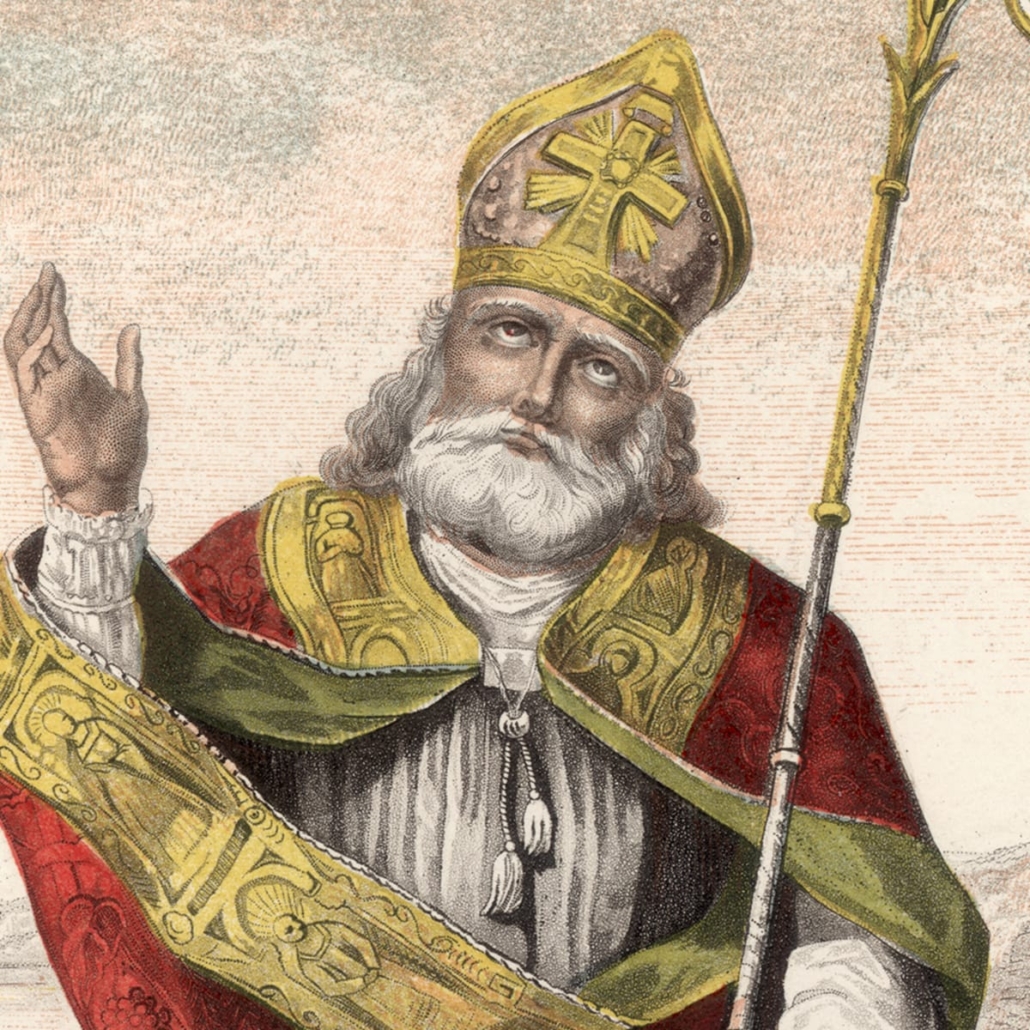 The patron saint of my ancestors is St. Patrick. This, of course, is the Emerald Isle, Ireland. This is a magnificently beautiful island. St. Patrick was born in present day Great Britain in the year 385 and died in present day Gaelic Ireland, Northern Island. He was venerated a saint by the Catholic Church. The major shrine attributed to him is Armaugh, in Northern Ireland, Glastonbury Abbey, England. We celebrate St. Patrick on the March 17. St. Patrick is mostly noted for his relationship with the shamrock (father, son, holy, spirit) and driving all the snakes off this Irish island. The exact dates of which St. Patrick performed his deeds and miracles are not known for certain but he was an active missionary during the 5th century. It is also believed he raised the dead. For accuracy sake it is believed his life was late 4th to early 5th century.

Medieval history credits him with being the first Bishop of Alomagh and Primate of Ireland. St. Patrick’s Day is celebrated on the supposed date of his death. His young life is quite colorful as he was kidnapped by Irish pirates and for approximately six years served as a care taker of the animals, eventually he escaped captivity.

Slavery, as you can see, goes way back in time. During St. Patrick’s time it was all white enslavement. For the most part it was the enslavement of criminals. Fealty was for a period of time with the injured party benefitting. Eventually Christianity grew and the practice of holding co-religionists in bondage was frowned upon. St. Patrick himself was enslaved for a time. The church becoming more and more powerful and transformed the Roman slave system and serfdom began, not much different.

Also, when Bathilde became Queen of the Franks who herself had been enslaved before she married Clovis II, banned the slavery of Christians. Although the name changed, the act of slavery was still being used. So you see in all actuality black slavery came much later. It has only been recently that the African continents became used for the slave trade. The white slaves melted into serfdom and poverty and then came the exploitation of the black race, centuries later. However, for those of you who believed that Black Irish was a racial thing, you were wrong.

The Irish were a fair skinned people with mostly brown hair and blue, green and grey colored eyes. The further north you went the more changes were observed. The Viking races were relatively ruddy compacted with mostly blue-eyed people and we see more and more blonde hair. I have no idea how that happened or how skin colors began. I believe the environment had much to do with it; perhaps the sun impacted skin pigmentation.

The only thing that history tells us regarding the Irish was there was some infiltration of Spanish blood. However, for the most part our blood is basically the same with all the same varying types. I really don’t know St. Patrick’s blood type but I am sure it would be interchangeable with some of us today. The Spanish being world explorers co-mingled their blood in most of the earth.

St. Patrick was Roman born (5th century Romano-British). He is the Patron Saint of Ireland. He brought Christianity to the Picts and Anglo-Saxon’s. Most of the St. Patrick Day feasting, secular culture began here in the United States. I believe we invented corn beef.

Thus came the corned beef that I promised you’d hear more about from last week’s article, Corned Beef, which in the British commonwealth of nations, is a beef brisket cured in large grains as salt called corns of salt; Thus corn beef. The corn beef we use here on St. Patty’s Day will have some sugar and other spices to give it that wonderful flavor we have become so fond of. The basic brisket goes back at least 1,000 years and was used in the celebration. Cabbage and potato were very common in Ireland so we know they were used and perhaps onion and carrots with flat bread. The preferred drink was Guinness beer. The next Day you would have potato cakes with the left overs.

As you can see, the evolution of St. Patrick’s Day is not a great one over these past 1,000 years. Not much has changed, go to church, over eat, and drink Guinness beer. Of course, you have the enjoyment of family and friends. There is much more to know and I will share it with you next time. I might even share my recipes.

God bless all and have a happy and safe St. Patty’s Day.

As always pray for freedom for those currently in the struggle for their freedom and help where you can.