Left, In 1780, at the age of 15, Samuel Downing joined the Continental Army. He served with the 2nd New Hamp­shire Regiment guarding forts on the New York frontier. Center, Lemuel Cook enlisted in 1781 when he was 16 years old. He served at the Battle of Brandy­wine, was present at the Surrender at York­town and was selected by Baron von Steuben to join the New York City campaign. Right, Born in Geneva, Switzerland, Albert Gallatin served as a volunteer under Col. John Allan, commander of the fort of Machias in Maine, according to his obituary. He later served three terms in the Pennsylvania House of Repre­sentatives. He also became the Secre­tary of the Treasury, served as the U.S. Minister to France and helped to established New York University.

The Revolutionary War ended in 1783 and photography was invented in the 1820s and 1830s, so most of the veterans of the war didn’t live long enough to have their portraits made. A handful of them did. In 1864, 81 years after the war, Rev. E. B. Hillard and two photographers embarked on a trip through New England to visit, photograph, and interview the six known surviving veterans, all of whom were over 100 years old. The glass plate photos were printed into a book titled The Last Men of the Revolution.

These are three of the Revolutionary War veterans who were over 100 years old when photographed.

Palermo, Sidney and Vassalboro, like the central Kennebec cities and towns in the previous two articles in this series, had Revolutionary War veterans among their early settlers. 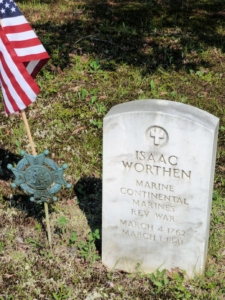 The grave of Isaac Worthen.

In Milton Dowe’s Palermo history, he identified Isaac Worthen (March 4, 1762 – March 1, 1841; later the name became Worthing), one of two brothers who moved to Palermo (then Great Pond Settlement) from New Hampshire, as a “hero of the Revolution.” An on-line search suggests he took the phrase from an article about Worthen, written by Samuel Copp Worthen (probably a descendant), in the Sprague Journal of Maine History, Vol. XII, No. 1, January-Mach 1924.

According to the article, Isaac’s father, Major Jacob Worthen, was a lieutenant in Captain Titus Salter’s company at Fort Washington, on Pierce Island at the mouth of the Piscataquis River, at Portsmouth, New Hampshire. The fort was designed by Capt. Ezekiel Worthen, Jacob’s father and Isaac’s grandfather.

Isaac Worthen was in Salter’s company by May 1777, when he was 15. The history article says he wanted a berth on the USS Raleigh, which was going to France to buy ammunition. Turned down as too young, he jumped aboard as the ship sailed; the captain let him stay and made him a marine effective Aug. 1, 1777.

Worthen served for the duration of the war in different companies. Millard Howard added in his town history that Worthen was a corporal in a militia unit before his 17th birthday; Dowe wrote that one of his posts was West Point, in 1780.

In 1782, he married Judith Currier and they came to Palermo, where, an on-line genealogy says, their son Jonathan was born in 1785. An on-line photo of Worthen’s gravestone in Palermo’s Old Greeley Corner Cemetery shows his name; the words “Marine Continental Marines Rev War” on four lines; and his dates of birth and death.

Howard identified another Revolutionary veteran, Sir John Bradstreet, who was “nearly 40 years old when he came to Palermo with his family in 1786” and settled at the north end of Sheepscot Pond. His descendants included Clair Bradstreet, who chaired the town select board for more than 40 years in the 20th century. Bradstreet and his wife Freda (Worthing) Bradstreet lived in the Worthing House, on North Palermo Road, now owned by the Palermo Historical Society.

Thaddeus Bailey (1759 – 1849) is identified in a genealogy found on line as a Revolutionary War veteran who lived in Palermo, Albion and Palermo again. Born in Newbury, Massachusetts, he enlisted at 18 as a private in the Massachusetts militia company that spent three days at Pownalborough in September 1777 “in the defense and retaking of a mastship in the Sheepscot River.”

In 1778, he was in a unit that enlisted from Lincoln County and served in Providence, Rhode Island. From June 30 to Sept. 25, 1779, he was a private in Colonel (later Brigadier General) Samuel Rogers McCobb’s Lincoln County militia regiment and participated in the unsuccessful attempt to oust the British from Fort George, in Penobscot Bay.

(General McCobb [Nov. 20, 1744 – July 30, 1791] was born and died in Georgetown, Province of Maine. He served throughout the Revolution, at least part of the time with the Lincoln County Militia. He was a captain at Bunker Hill, a colonel on Benedict Arnold’s expedition to Québec and in charge at Penobscot after the British finally left in 1784.)

Alice Hammond claimed to have found another Isaac (besides Isaac Worthen) who enlisted as a teenager: in her history of Sidney, she said of Isaac I. Cowan (March 14, 1758 – July 19, 1828): “At age fourteen he went into the Revolutionary War and served three years.” However, by this writer’s reckoning Cowan would have turned 15 in March 1773, two years before the fighting at Lexington and Concord.

An on-line site lists yet another young volunteer who ended up in Sidney: Massachusetts-born Jabez Rollins or Rollings (about 1767 – Oct. 4, 1842, or Oct. 28, 1847 [sources differ]) joined the New Hampshire Line in 1782, when he was 15. After the Revolution, he was in a Massachusetts regiment from February through June 1787 and helped suppress Shay’s Rebellion, the website continues; but since Shay’s Rebellion, an uprising by farmers protesting economic hardship in western Massachusetts, was suppressed by February, his role must have been limited. 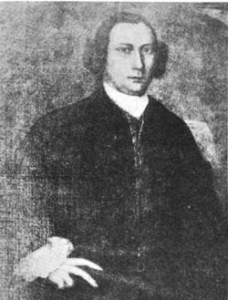 Captain Abiel (or Abial) Lovejoy (Dec. 16, 1731 – July 4 [probably], 1811) was one of Sidney’s best-known veterans; Hammond referred to him as “Squire Lovejoy, the old slaveholder.” Born in Andover, Massachusetts, he married Mary Brown, in Charlestown, in December 1758. He was part-owner of trading ships, and later owner and captain of a small fleet based in Charleston. Hammond wrote that his ventures extended north to “the Bay of Fundy and south to the West Indies,” and that Mary sometimes sailed with him.

In 1760, Hammond said, he bought land in Pownalborough; in 1761, he and Mary and their first two children moved to what became Dresden, where he was a merchant, a ferry owner, a shipbuilder and “involved in public office and in land transactions.” In June 1763, Hammond wrote, he was one of the first three men to receive land in Sidney (then Vassalboro) from the Kennebec Proprietors.

In 1764 Lovejoy, in partnership with Mary’s father Nathaniel Brown, bought “half a saw mill and adjoining land and a half interest in a dam” on what was later Hastings Brook. In 1776, the Lovejoys moved to a farm in Sidney overlooking the river.

Hammond wrote that Lovejoy was in the Massachusetts militia from 1755, and from 1758 to 1771 his assignment was in Lincoln County, in what is now Maine – hence, presumably, his interest in acquiring land there. She added, “He also served in the American Revolutionary War.”

But she gave no details of his Revolutionary service, instead listing wartime activities in Sidney: in 1777 petitioning for an extension of the postal service and in 1778 serving on a committee to choose the post rider; in 1781 becoming Justice of the Peace; and “between 1776 and 1798” holding many other local offices.

A detailed on-line source adds that in 1776 he was a member of the pro-Revolutionary Committee of Safety and Correspondence, and in 1779 on “a committee to settle with the women on account of supplies ordered to the soldiers [sic] families by the General Court.” He was also highway surveyor in 1776 and 1777; selectman in 1779 and 1780; in 1780 town meeting moderator in 1780; and town treasurer and a county convention delegate in 1781.

Apparently he was a delegate to the Massachusetts General Court during the Revolutionary years, too, because the on-line sources says he “had been elected year after year” before he was challenged in 1781 and 1782, partly on the ground that he was not a supporter of independence.

The unnamed author of the on-line piece disagrees, calling Lovejoy “a fiery American patriot.” Evidence cited includes Tory Parson Jacob Bailey (mentioned in the history article in the Jan. 13 of The Town Line) naming him an instigator of mobs that attacked Bailey and other Loyalists, and Lovejoy’s willingness to give officers and soldiers in Benedict Arnold’s 1775 army hard money in return for their already-depreciating paper currency.

“Captain Abiel Lovejoy lost some $30,000 this way and afterwards papered a room in the Lovejoy homestead with this ‘worthless money,'” the on-line account says.

The Lovejoys had eight children before they moved to Sidney, and Hammond wrote six more were born there. The family lived in an elaborate house and owned several slaves, three of whom were buried in the small family cemetery on their farm, which Hammond called the “oldest cemetery in Sidney.”

Hammond also wrote about the Reynolds family. Nathaniel Reynolds IV, Esquire, settled in 1779 on the south end of West River Road in what was then Vassalboro, with his family. He served in the Revolutionary Army and “loaned money to the government for the cause”; and five sons “were all Revolutionary soldiers,” Hammond said.

One of Vassalboro’s pre-war settlers and veterans was Charles B. Webber (January 1741 – Nov. 20, 1819). Born in Old York, Maine, he fought in the French and Indian Wars in 1757 and 1759. During the Revolution, an on-line genealogy says he is recorded as serving as second lieutenant in the Second Lincoln County Regiment of the Massachusetts militia, which was organized in 1776 and sent to Riverton, Rhode Island, in 1777.

Webber married his first wife, Hannah Call, in 1761 in Dresden. In 1765 they moved to Vassalboro, settling in the Riverside area. The on-line genealogy says their second child, a daughter named Sarah, was the first white child born in the town.

The same website says Webber was Vassalboro’s first treasurer, in 1771, and served again in 1776, when he was also the third town clerk; in 1773 and from 1792 to 1796 was a selectman and in 1790 was one of the committee that laid out Vassalboro’s first nine school districts.

A search for Webber’s name in Vassalboro’s extremely valuable on-line cemetery database confirmed his burial site in the Webber Family Cemetery at Riverside.

Getchell was born in Berwick and is identified first as a major, perhaps from service in the French and Indian Wars. He must have moved to Vassalboro as soon as he bought his land, because the website says he was elected selectman at the first town meeting, April 26, 1771, and many times thereafter.

On July 23, 1776, he was commissioned a captain in the Second Lincoln County Regiment, and led his 50-man company at Riverton in 1777. In 1786, he was elected a member of the Massachusetts General Court.

Amos Childs (July 5, 1764 – Feb. 19, 1847) was a Massachusetts native who spent at least part of his time in the Revolutionary force as a drummer. He served three years and was honorably discharged in 1783. On Nov. 1, 1801, he married Hannah Webber (born in 1780 in Vassalboro, Charles and Hannah [Call] Webber’s daughter) in Vassalboro; they had “at least two children,” an on-line source says.

Hannah died Feb. 14, 1860; she and Amos are buried side by side in the North Vassalboro Village Cemetery.