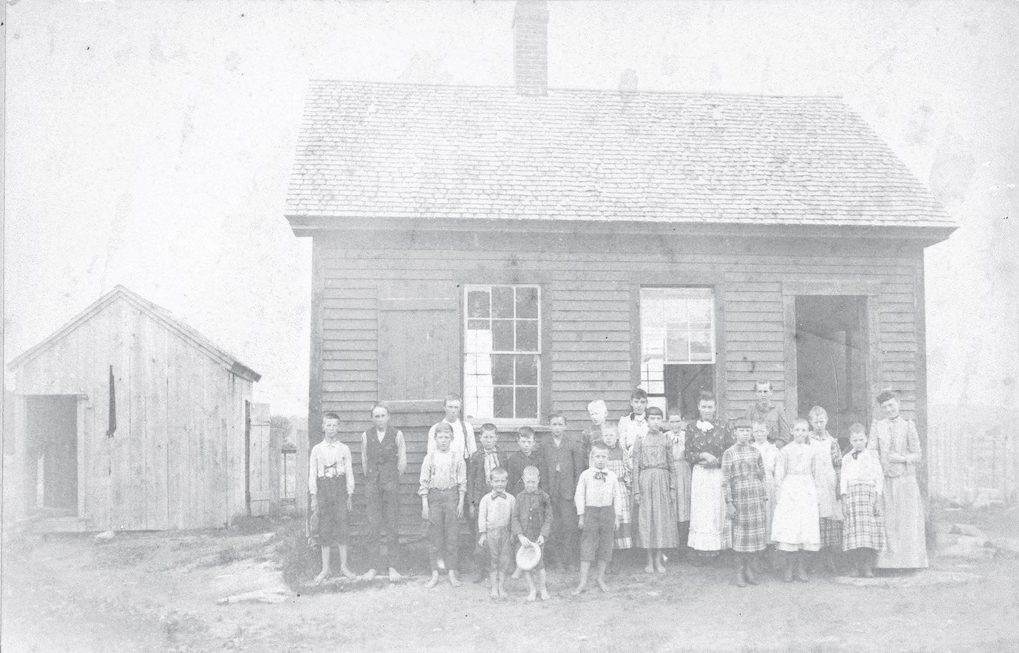 A 19th century photo of the Clinton schoolhouse.

Winslow is the next town north of Vassalboro along the east shore of the Kennebec River. According to Henry Kingsbury’s History of Kennebec County, its location was determined by the junction of the Kennebec with the smaller Sebasticook River, as a river junction was a convenient meeting place for groups from different areas.

When the first white settlers reached the area is unclear. Kingsbury cites a 1719 survey showing a building on the south side of the Sebasticook and east shore of the Kennebec that is identified as a trading post built in 1653.

By 1675, despite the earlier resumption of fighting between Natives and settlers, there were two trading posts at the rivers’ junction. Kingsbury surmises they did not survive a 1676 Native attack, although he found evidence suggesting at least one building was still standing in 1692.

In 1754, the Massachusetts General Court ordered a fort to be built at the Sebasticook-Kennebec junction for protection against the French and the Natives. Massachusetts Governor William Shirley personally chose the site, which commanded both rivers and could interrupt water traffic between tribes and with Québec.

General John Winslow, described in Wikipedia as a major-general of militia, was sent from Massachusetts with 800 men to build the fort. He superintended such a speedy job that early in September, a 100-man garrison under Captain William Lithgow moved in. Winslow’s plan did not suit Lithgow, Kingsbury says, and was substantially amended.

The main building was supported by two separate two-story blockhouses, each equipped with cannon. One later became a house for a man named Ezekiel Pattee and was moved down the river. In 1791, the list of resident taxpayers in Winslow, per Kingsbury, included four Pattees, Ezekiel, Benjamin, William and Daniel. 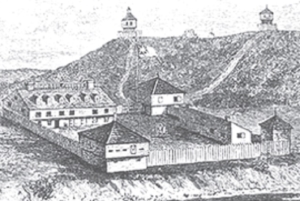 Kingsbury commends the Town of Winslow for its efforts to preserve the remaining Fort Halifax blockhouse.

Winslow, like Augusta and Vassalboro, was originally laid out on both sides of the Kennebec. Originally called Ticonic (there are various spellings), the Native word for the river junction and the rapids just upstream, and then Kingsfield Plantation, it was incorporated on April 26, 1771, as Winslow, one of the first four towns in Kennebec County (the others were Hallowell, Vassalboro and Winthrop).

The name of the new town honored General John Winslow.

As in other Kennebec River towns, the early survey by John McKechnie (who was also a doctor) laid out some long narrow lots, but the majority are only about three times as long as they are wide.

The east-side (Winslow) plan reproduced in the History of Kennebec County shows lots along the east shores of the Kennebec and Sebasticook and out to the 15-mile east boundary, but none in the northeastern triangle between the two rivers.

One of those Winslow-side inhabitants, according to Ernest Marriner’s Kennebec Yesterdays, was the town’s first lawyer, George Warren. In 1791 Warren went to Boston, where he petitioned the Massachusetts General Court, unsuccessfully, for approval to hold a lottery to raise money to build a bridge across the Sebasticook. Because he had business in southern Maine as well, he chose to make the Portland to Boston leg of his trip by land, Marriner says.

Massachusetts law, in the 1700s and as late as 1815, required every town to raise taxes to support religion (meaning the Congregational church, usually). Marriner says many Maine towns could not afford to comply, and lists Winslow as one of the more recalcitrant.

Twice, he says, the town was threatened with legal action if its officials continued to ignore the law. In 1772, they voted to pay for one month’s worth of services; in 1773, they agreed to pay a man named Deliverance Smith for 12 Sundays. That year, too, Rev. John Murray came inland from Boothbay for a service at Fort Halifax, where the children he baptized included three of John McKechnie’s.

In 1774, Rev. Jacob Bailey, of Pownalborough (now Dresden), preached at Fort Halifax. (When the Revolution broke out, Bailey remained loyal to the British monarchy and eventually had to leave the country for Nova Scotia.) The next year, Marriner says, Winslow voted not to pay for any preaching.

In 1794, Marriner says, Winslow hired a clergyman named Joshua Cushing to settle as the town’s minister. Marriner describes Cushing as a Revolutionary War veteran and a Harvard classmate of John Quincy Adams who became a community leader and served in the Massachusetts legislature and in Congress.

Maine towns had trouble complying with another Massachusetts law that required an elementary school for a town with 60 families and a grammar school if there were 200 families. In 1784, 1788 and 1789, Winslow voted no public funding for schools, Marriner says.

By 1795, there was discussion at town meeting of creating two towns divided by the river. A June 23, 1802, legislative act incorporated the Town of Waterville and defined it as the part of Winslow on the west side of the Kennebec. 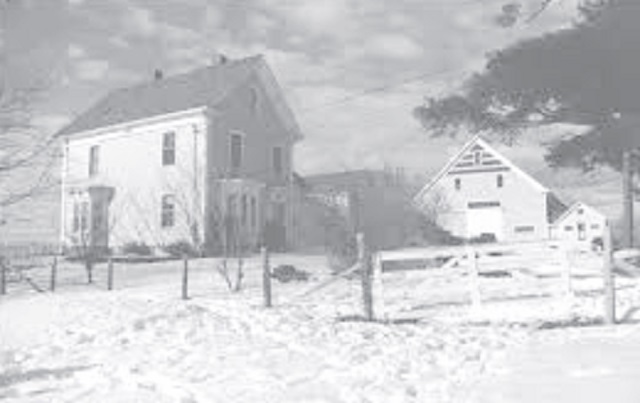 The Conforth homestead, in Benton, in this 19th century photo.

Benton, Winslow’s northern neighbor along the river, was the southern part of Clinton until 1842. Kingsbury mentions two deeds from the Plymouth Company in the 1760s, but he dates the first settlement inside the present town boundaries to 1775 or thereabouts, when two Irish emigrants named George Fitzgerald and David Gray cleared land about a mile north of the present Benton Station (the cluster of buildings at the end of the bridge across the Kennebec.

Later settlers moved farther north along the Kennebec and took up land on the west side of the Sebasticook.

In 1790 or earlier, Kingsbury said, the area that is now Benton and Clinton became Hancock Plantation. There were then 278 residents, the majority in the southern end that is now Benton. The first town meeting was held on April 20, 1795; Kingsbury lists the town officials then elected.

By the 1797 town meeting, Kingsbury wrote, there were eight school districts, again mostly in the Benton area, and 166 students; the town voted a $300 tax for education.

After four decades of growth, on March 16, 1842, the by-then-Maine, rather than Massachusetts, legislature approved an act dividing Clinton and creating a new town named Sebasticook. Kingsbury provides no information on who wanted the separation or why.

The history of Clinton, the northernmost Kennebec County town, overlaps with the history of Benton until the two were separated in 1842.

Settlement along the Kennebec that began in the southern (Benton) area spread north up the river. Kingsbury lists Pishon’s Ferry (or Pishon Ferry, shown on 20th-century maps opposite the Hinckley section of Fairfield) as the east end of the ferry owned by Charles Pishon, who moved there before 1800. At least three other families began farming in the area, the first before 1790.

Clinton developed an early second center along the Sebasticook, an area that became the present downtown. Kingsbury names six families settled in the area before 1800.

Several sources say Clinton was named after DeWitt Clinton (1769-1828), a United States Senator, mayor of New York City and the sixth governor of New York, largely responsible for the building of the Erie Canal. However, the Wikipedia entry on Clinton, Maine, says that information is false: the town was named after DeWitt Clinton’s uncle, George Clinton (1739-1812), the first governor of New York and the fourth vice-president of the United States, serving under both Thomas Jefferson and James Madison.

NEXT: Moving upstream from Augusta on the west bank of the Kennebec, earliest history of Sidney, Waterville and Fairfield.

[See also: Up and down the Kennebec Valley: Augusta & Vassalboro]