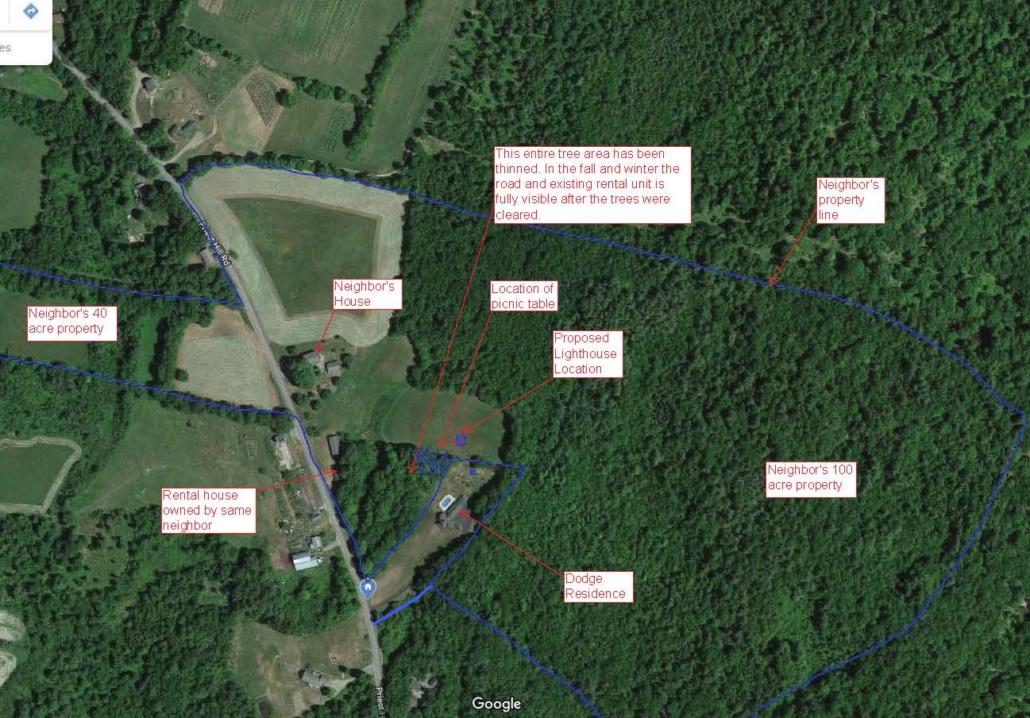 An annotated photo of the Dodge property and proposed structure, which was presented at the Board of Appeals hearing on Tuesday. (Annotated by Joshua Dodge)

Rena and Joshua Dodge were great friends with their neighbor, Richard Breton, until he decided to build a lighthouse on the hilltop behind their residence on Priest Hill Road in Vassalboro. On Tuesday, September 24, nearly 30 people crowded into the central meeting room at the Vassalboro town office for a hearing on the dispute before the Board of Appeals.

Thirteen years ago, the Dodges purchased five acres in a secluded area on Priest Hill Road. Breton owns a wide swath of land bordering the Dodges’ property on three sides. The Dodges were attracted to the location because of the property’s isolation and privacy, and with that in mind, built their new home well back from the road.

“It was secluded; it has privacy,” Joshua Dodge said, describing their motivations for purchasing the property.

Three years ago, the Dodges added a swimming pool behind the home for their family and two children, age 6 and 9, to enjoy, far away from prying eyes.

Both parties enjoyed a cordial relationship for more than a decade. At the hearing, Joshua Dodge referenced “many a dinner of pizza with [Breton] and the kids” at a picnic table in the back yard. “Good times there,” said Dodge.

But goodwill between the parties began to collapse a few months ago when Breton brought the Dodge family plans for a three-story structure he was thinking of building on the hill overlooking the backyard of their house.

“The whole reason we filed the administrative appeal,” Dodge said at the hearing, “is because we feel the location is a huge invasion of privacy.”

The planned building was described at the hearing as a three-story structure, approximately 35 feet high, with the third story entirely encased in glass windows and a balcony surrounding the upper floor (hence the term “lighthouse”), which would perch at the top of a small knoll on land owned by Breton but directly behind the Dodges’ residence.

The building would be rented out “three to four months” of the year, according to Breton, as it would be inaccessible during the snowy winter months.

The initial building permit was issued by former Codes Enforcement Officer (CEO) Dick Dolby on August 8, but Dolby was not present at the hearing as he has recently taken a position with the Augusta Fire Marshal’s office. However, current acting CEO Paul Mitnik was on hand to answer regulatory questions. 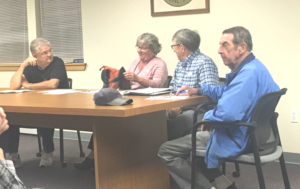 Appeals Board member John Reuthe stated, “Mr. Breton has followed everything he’s supposed to do. Whether it’s the right thing to do, that’s up to him. That’s the hard part. You can be right, but do you actually win the war?” To which Breton replied, “No, nobody wins the war in this.”

Appeals Board member Leon Duff, who had visited the location of the planned structure, added, “I looked at it, I walked it, I saw the [picnic] table on the crest…I have kinda come to the conclusion in my mind that, with all the acreage available, why would you build such a structure so close to another structure? I don’t understand that. It makes no logic to me. And I read the [submitted correspondence]…I’m kind of puzzled about why Mr. Breton has decided to go ahead and do it. There are so many options available, because of the land that is owned, and so I’m troubled with that.”

In the end, with no regulatory issues identified, the committee could not find a reason to deny Mr. Breton a permit for construction.

Appeals board chairman, Kathy Lees, summed up the meeting: “The appeals committee has been unable to negate the process [of construction] because we don’t have any standings to suggest that there was something inadvertent for malicious intent or [anyone was] misinformed.

“The opinion of many sounds like this is unattractive, this is going to deter from the natural space, and that you find it unattractive, unpleasant and it has become an emotional hardship due to failed efforts to communicate and come to common ground…But our committee cannot rule that this has become an issue of pure safety or something we can stand to offer a stop, a solid stop, on the project. But I’m afraid that the efforts for communication have fallen on deaf ears, and opinions will continue to fly.”

CORRECTION: The building permit for Breton’s proposed structure was issued on August 8, not August 18. The article has been updated.

CORRECTION: A previous version of this article stated that the Dodges initially purchased their property from Mr. Breton. That was incorrect and has been removed from the article.

EDIT: The previous photo, created by the author of the article, has been replaced with the annotated photo presented at the hearing on Tuesday. The original photo used with the article can be seen below. 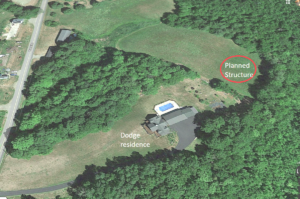 The original annotated photo of the site. Google maps photo.