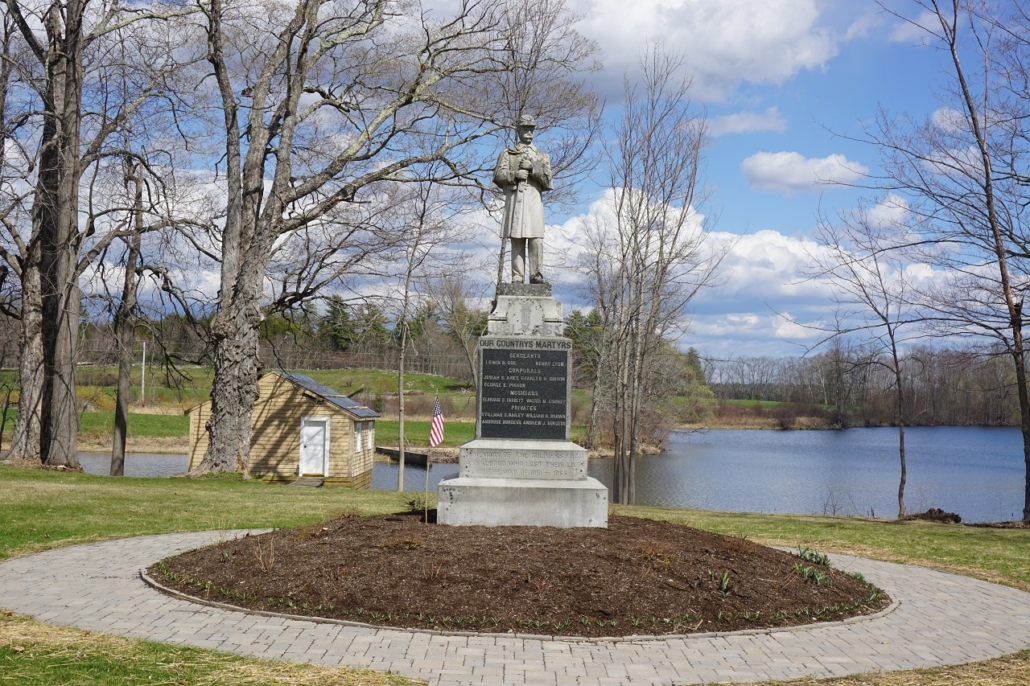 Have you ever looked at this monument, as I have, and wondered, “Who were these people? Did they all die? If so, how and where did they die? What units did they serve in?” I thought of some of these questions every time I studied the monument over a period of something like thirty years. Then, a couple of years ago I decided to see if I can answer any of these questions. Oh MY! There is SO MUCH information. I started with a Google search and that resulted in all sorts of different rabbit paths to run down. I ended up at the Maine State Archives and that is a treasure trove of information on each of the individuals listed on the monument….and every man who served in the Civil War from Maine.

The Vassalboro Civil War Monument has 63 names on it. The panels that face the West, the South, and the North have 47 names of Vassalboro men who died in the Civil War. The panel that faces East, towards China Lake, displays the names of 16 men who served and survived the war.

So, how did those 47 men die? Sgt. Doe, at the top of the list on the panel facing the West was killed by a falling tree as he and his men were cutting wood for fuel and winter shelter. Seventeen were killed in action or subsequently died of their wounds…..make it eighteen if you will join me in including John Estes who is known to have been wounded in the leg at Gettysburg and was subsequently listed as missing and no record found on him beyond that date. Twenty-three men succumbed to various illnesses and diseases and this matches most accounts of deaths in the Civil War….that death from disease was more likely than death in battle. The Battle at Gettysburg resulted in the names of five Vassalboro men on this monument, making it the most deadly battle of the war for Vassalboro.

The 63 men named on this monument served in 19 different units but more than half served in just three units. Some of them served in two or more units over the course of the war. The largest number, 17, served in the 21st Maine Infantry Regiment and most of them were in Company D. This was a nine-month enlistment unit that saw service in Florida and Louisiana. Charles Tarbell was the only one of this unit from Vassalboro killed in action and that was at Port Hudson, Louisiana. Six of the 16 survivors listed on the east side of our monument were in this unit. Two from the 21st re-enlisted in other units and were subsequently killed in action. Eight men of the 21st died of disease. The 16th Maine Infantry Regiment has 10 Vassalboro men represented, most of them being in Company E. Nine of the deceased are from the 16th. The 16th played a pivotal role on the first day at Gettysburg and was essentially sacrificed so the rest of the Union line could position itself safely. The 3rd Maine Regiment had 9 Vassalboro men scattered in numerous companies of that Regiment. Seven of these nine men died in the war.

There are detailed records showing Vassalboro sent close to 250 men to serve in the war. The Vassalboro Selectmen in 1868 submitted a list of 207 names of men sent to the war but 23 of the names on the monument are not on the selectmen’s 1868 list. Closer inspection shows the selectmen’s list was of men sent from 1862-1865 when the town paid bounties and/or aid to families of men serving. So units that mustered in prior to 1862, such as the 21st Maine, do not show up on this list. Company D of the 21st had around 50 men from Vassalboro with, as stated earlier, 17 of their names memorialized here on our monument.

Of the list of 207 names the selectmen submitted in 1868, several are not from Vassalboro and a couple of them were even from New Brunswick! This was because men from elsewhere could accept a towns’ bounty, or goas a replacement for a resident. Three of the names on the monument show up there because they were born in Vassalboro, but they actually enlisted someplace else (Ashland, Litchfield, and Orono).

The biggest question for me is how and why were the 16 names selected that are on the monument of men who did not die in the Civil War. One was our only Navy veteran, three were discharged due to disability, one had been a Prisoner of War, William T. Taber was a second lieutenant in the 21st, and the other 10 are simply listed as mustered out, honorable discharge. George Phillips was still alive at the time the monument was erected (he died April 8, 1911, at home in Waterville). He served in the 11th Maine Infantry from August 1863 until February 1866 rising through the ranks from private to corporal to sergeant. Why aren’t Vassalboro’ s higher ranking officers listed, such as Lt. Col. Nathan Stanley, or First Lieutenant Thomas Maxfield, both of the 21st, or Second Lieutenant Bradford W. Smart, of the 3rd, who was taken prisoner at Manassas?

I have a theory as to why there may be some discrepancies. Primarily, I believe it is easier and faster now to verify details from 1861-1865 than it was in 1904 when this monument was being created. Forty years after the war there were still survivors and family members of deceased men whose partial accounts of facts and events were probably not questioned. A more distant view of events now show that an individual may have been born in Vassalboro, enlisted elsewhere, subsequently died and thus their name made it on this monument. All of the card details on each individual who served can now be found on microfiche at the Maine State Archives. My investigation took many hours. Similar work in 1904 looking through tens of thousands of paper cards would have taken days or weeks of work. Online records now available make it possible to look at many sources from many places with a few clicks.

There is a lot more to learn! For instance, I get frequently asked about how many men from Vassalboro were in the 20th Maine, the famous Maine regiment credited with saving the Union line on the second day of the Gettysburg battle. Of the 50 or so Vassalboro men who were present at the Battle at Gettysburg, none were members of the 20th Maine. Vassalboro provided one individual, Preston Jones, to the 20th Maine in August 1864 and presumably he would have been present to witness the Surrender of Lee’s Army at Appomattox Courthouse on April 12, 1865.

A postmark cancellation from any Vassalboro Post Office dated April 26, 2021.

CORRECTION: Previously this article stated there were 61 names listed on the monument. There are actually 63. The article has been updated.

FOR YOUR HEALTH: Being 55+ Has Its Advantages Vassalboro town warrant now includes school budget articles
Scroll to top