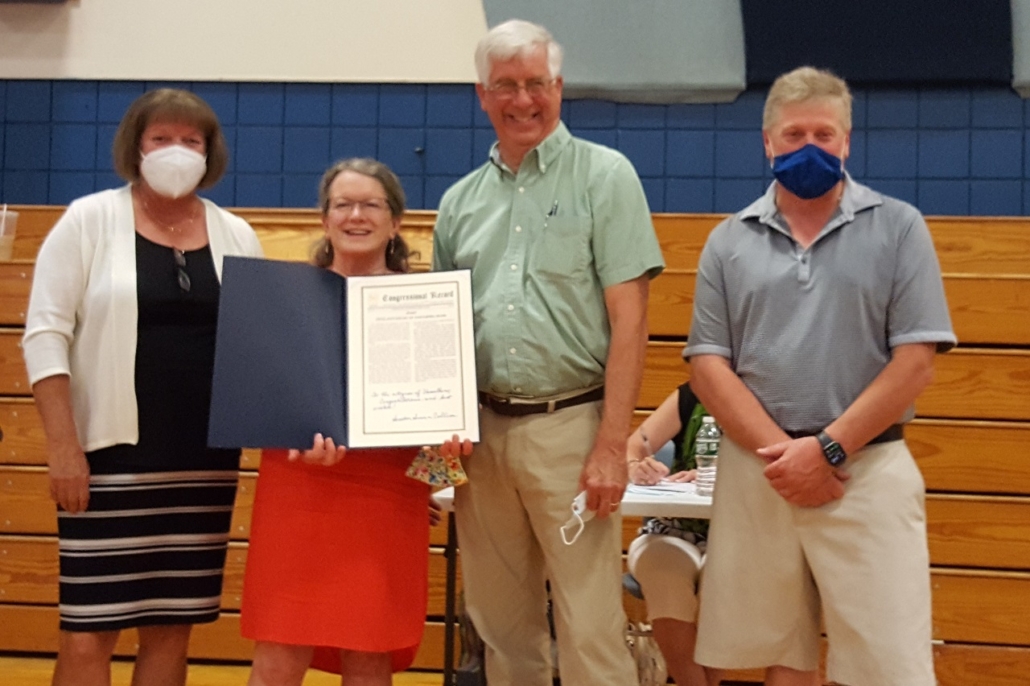 Veteran moderator Richard Thompson guided about five dozen Vassalboro voters through the first 37 articles of their annual town meeting warrant in a little over an hour the evening of June 7.

In the only elections June 7, budget committee members Donald Breton, William Browne, Phillip Landry and Peggy Schaffer were re-elected and Dallas Smedberg was elected to fill the seat vacated by Christopher French.

All warrant articles were approved, four with amendments.

The warrant article discussed at most length initially asked voters to authorize selectmen to “accept gifts of labor, goods, use of equipment, and money, and to implement those gifts for the donor’s intended purpose.”

Former Selectman Lauchlin Titus asked whether the article allowed selectmen to refuse a gift. For example, he asked, what if someone proposed to donate an ambulance – and leave the town to equip, man and maintain it?

Or, Clough Toppan suggested, a swimming pool on Main Street? He recommended selectmen consider what townspeople would say if they were allowed to vote on a gift.

Holly Weidner questioned letting the donor, rather than town officials, define the purpose of a gift.

John Melrose, retiring chairman of the selectboard, said during Vassalboro’s 250th anniversary celebration many people had donated labor, materials and money, for example for the renovation of Monument Park, in East Vassalboro. He expects more donations before the year is over.

Michael Vashon, a former town manager, reminded voters they could attend selectmen’s meetings – agendas are posted on the town website in advance – to voice their opinion on gifts.

Ultimately, the article was amended to include the words “or reject” in commas after “accept,” and was approved lopsidedly, with half a dozen people voting “no.”

The warrant article that would have funded 10 social service agencies in and out of town was amended after Melrose made a motion to delete $500 proposed for Literacy Volunteers of Waterville. The organization told him that it had disbanded, he said.

Voters then reappropriated the $500. They added $112 for the Sexual Assault Crisis and Support Center, bringing its appropriation to the requested $1,519 instead of $1,417 recommended by town officials (because, Melrose said, they try to stay with the same amount each year). And they added the remaining $398 to the China Region Lakes Alliance, increasing its appropriation from the recommended $7,500 closer to the requested $11,500.

The total for nine agencies remained at $24,017, as recommended by the selectmen and budget committee.

At Melrose’s suggestion, the authorization to let selectmen accept and use American Recovery Plan funds from the state and federal governments had county government added, now that selectmen know Maine counties have received grants.

The good news was for the article authorizing selectmen to pay the annual Kennebec County assessment. The estimated amount in the article was $383,911; Melrose said the final county budget reduced Vassalboro’s share to $379,384.

Four presentations were made at the beginning of the meeting.

Give Us Your Best Shot! for Thursday, June 10, 2021 Vassalboro planners approve another solar array
Scroll to top