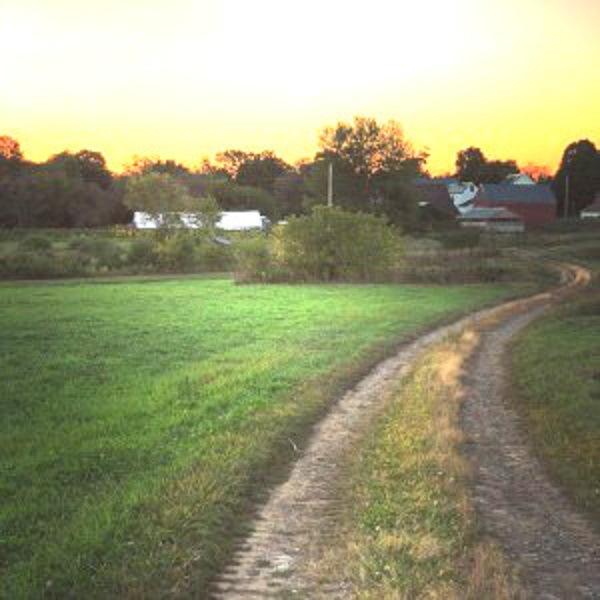 A view of the Cates Family Farm outbuildings to the west of the fields. (contributed photo)

The big, three-story house at Cates Family Farm was completed in 1809. Its many staircases and doors tell of a time when farm families were huge — when the easiest way for a farmer to get cheap labor was to make it themselves. Ownership of the farmhouse and its surrounding lands has changed hands a few times. Built originally by a retired sea captain, the farm passed into the hands of the Cates family in the early 1900s. Benjamin Harold Cates Sr. and his wife, Annabel Ingraham Cates, had a growing family (they eventually ended up with a dozen children!) and were running out of space. The purchase of a big, rambling farmhouse, surrounded by a few dozen acres of pasture and forest, which was conveniently within walking distance of the village schoolhouse where Annabel taught, the local dairy and general store that Harold operated, and the Quaker Meetinghouse the Cateses regularly attended, was the perfect solution for a growing family.

Annabel and Harold had six sons and six daughters, but of them, perhaps a third were interested in farming. Of that third, some had moved far enough away (including son Paul, who had hightailed it off to Germany) that when it came time to finalizing their will, the farm passed into the hands of their son George, who lived with two sisters in the big house. At that time, the farm was known as “Outlet Farm” — due to its abutting China Lake and the Outlet Stream that winds its way out of the lake, through Vassalboro, toward broader rivers. George was a forestry man, though he knew his way around a tractor and a dairy barn. He’d spent several years out west in the ‘40s, working in the national forests, and knew his way around the woods of the farm like the back of his hand. 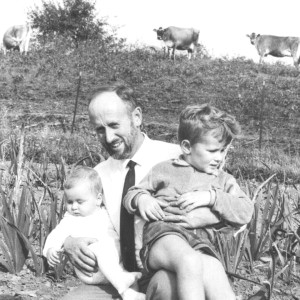 Paul Cates holding sons Martin and Christopher in the summer of 1970, with the family’s Jersey heifers grazing in the pasture above them. (contributed photo)

When Paul Cates came back to Maine in 1969, accompanied by his young wife, Elisabeth, and their son Martin, they settled into another family home in the village of East Vassalboro and, in 1970, began raising gladiolus on the farm in one of the fields that had lately been reserved by George for dairy cattle feed crops. At first, Paul was known simply as The Glad Man, selling gladiolus out of his VW bus. This moniker helped him to establish the Cates Glads brand — though in truth, the farm grew numerous types of cut-flowers — which lasted through the late 1990s and early 2000s.

Paul and Elisabeth continued using the lands, though they were in George’s name, until George’s death — when ownership of the farm passed to them. Around the same time that the first Cates heirloom glad bulb price list was published (this would later become a print catalog, and finally evolve into the web store that exists today), the most important word was added to the Cates Glads brand — Family.

Cates Family Glads, as the farm was now called, lasted as a company name until the 2010s. By this point, Paul was well beyond retirement age, though in truth it took running himself over with the farm truck, which required several months of rest and leg elevation to heal, to force him to retire. Paul and Elisabeth’s son Chris was now the driving force on the farm — both figuratively and literally, since he’d not only taken on the lion’s share of farm operational work, but had also become the farm’s primary wholesale flower delivery driver. He had other projects on the farm besides flowers, though — he started raising a small herd of beef cows to feed himself, and he’d taken over George’s forestry and hay work. And so we made one last tweak to the brand in 2019: Cates Family Glads was now called Cates Family Farm.

The Cates family want you to help them celebrate 50 years in business.

On Saturday, July 11, 2020, they are celebrating Cates Family Farm’s 50th year in business! The work started earlier in 1970 than on July 11, of course, but that’s right around the time the first glads always start blooming, and isn’t that something to celebrate by itself?

Because of the global COVID-19 pandemic, they’re unable to invite everyone to come visit them, both because there are restrictions on the number of people at gatherings in Maine, and also because they have no intention of their little farm on China Lake becoming the epicenter of the next coronavirus infection spike. So, instead, they’re going to throw a bit of a socially-distanced party, calling it a global, weed-pulling hootenanny!

They invite you all, in your own gardens, to go out on Saturday, July 11, 2020, find at least one weed, and joyfully rend it from the ground. Bonus points if you can come up with some sort of terrible but brilliant pun to describe the moment, and make the late Paul Cates proud. (Fastidious gardeners, you’ll have to leave a weed in the ground prior to the July 11 date if you want to participate with them on the day of the hootenanny.)

In the absence of your own garden, they suggest you plan to find and remove weeds in your family’s or friends’ yards instead. Please note: they do not condone guerrilla weeding tactics such as leaping over hedges or garden fences in the middle of the night to steal dandelions from your neighbors’ flower beds, or pulling weeds on public land without a permit — they encourage everyone to party within the bounds of local ordinances.

After the festivities in the garden come to a close, those on the farm in Maine will likely end the day with a lobster feed. They hope that you all, as most honored guests of their first (and, to be honest, hopefully last!) socially-distanced global weed-pulling hootenanny, get to eat something delicious!

Of course, they would’ve loved to invite all of you to come and pull their weeds (with blanket permission!), but… perhaps after the pandemic?

If you take photos of your participation in the socially-distanced party, and you’d like them to include the photos in a gallery on their farm’s website, please email them to Margaret Cates, at margaret@catesfamily.farm, with the name of the photographer and location of the photo. They won’t post photos to which we can’t apply proper credit!

Really, though: pull only with permission.

They mean it about the guerrilla weeding tactics. They hold no responsibility for anyone who gets arrested for pulling weeds.

In the meantime, with best wishes on behalf of the rest of the Cates family, and with hope that you continue to find joy in your (or your neighbors’ (within legal bounds)) gardens.

VETERANS CORNER: We hear on the television and radio that veterans are receiving... Palermo Community Library annual meeting going virtual
Scroll to top