On the corner of Elm and Park streets, in Waterville, stands one of the more magnificent buildings in the city. An iconic landmark that stands tall in the Waterville skyline. This year, the congregation of the First Baptist Church will celebrates its 200th birthday. The official date of the anniversary is July 15, 1818.

According to Jan Goddard, chairman of the 200th anniversary committee, church secretary, and China resident, “Two hundred is a number. Numbers in themselves are insignificant; it is the events of those years that make it significant.” 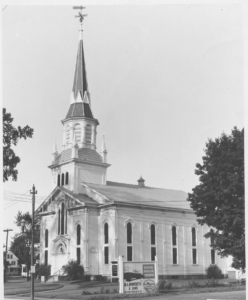 The First Baptist Church, circa 1955, which doesn’t look much different than today. (Contributed photos)

Organized by Rev. Jeremiah Chaplin, in 1818, the original meeting house was located in a farmhouse on the site later occupied by the Elmwood Hotel, at the intersection of Main Street and College Avenue. Chaplin was the first president of Colby College, when it was located on College Ave., where the Waterville Police Station, Social Security Office, and the Waterville Homeless Shelter now stand. Recognizing the need for the college to be affiliated with a church, Chaplin gathered a few Baptist families at his home, a building later known as the Elmwood Hotel.

The First Baptist Society, a legal entity to hold property, was formed in 1924, and the society sold pews to help finance the new meeting house. At a cost of $4,000, the new meeting house was completed in 1926, on the corner of Elm and Park streets. The main part of the building still rests on the original foundation. The land was donated by Timothy Boulette, Waterville’s leading attorney and state senator.

“This small group of Baptists did not want to depend on the availability of the town meetinghouse, where most others met to worship,” Goddard added. “They were determined to have their own church.” *

Stephen Chapin served as part-time minister until the election of the first full-time pastor, Harvey Fritz, in 1829.

Between 1836 and 1904, additions were built in four separate stages, resulting in the present vestries, classrooms, parlors and dining facilities.

In 1855 saw the first major alterations to the sanctuary with the removal of the doors from the pews, the lowering of the pulpit and the installation of carpeting.

In 1866 the congregation accepted into membership Samuel Osborne, a former Negro slave, on his own statement that he had been baptized and accepted into a church in Culpepper, Virginia, where the Civil War had destroyed all records.

In 1877, the first baptism was performed inside. Previously, all baptisms had taken place either in the Kennebec River or Messalonskee Stream.

The church underwent major renovations in 1875, and services were temporarily held at the Unitarian Church. The re-dedication sermon was delivered by Rev. George Dan Boardman Pepper, the only man since Jeremiah Chaplin to be both pastor of the First Baptist Church and President of Colby College.

Electric lighting was installed in 1889. 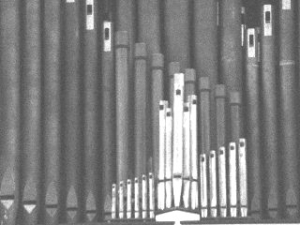 The pipe organ that is now used in the church. Contributed photo)

Rev. William Spencer, who had a successful pastorate at the church for more than 20 years, shared his appreciation of music and secured the enrichment of the service of song, most notably with the purchase of a new, hand-pumped organ in 1893 at a cost of $2,200.

In a change in the law in 1901, permitting churches to hold property, the society was incorporated as the First Baptist Church of Waterville, thus ending its run as a “society.

A new Purinton organ was installed in 1924.

On the 100th anniversary of the building, the Philbrick parlors and Morse Baptistry were opened, and new lighting was installed.

The sanctuary underwent another remodeling in 1951 when the central pulpit was changed to a lectern and pulpits were added on either side of the chancel, with the altar in the center. This remodeling cost $60,000 – 17 times the original cost of the entire building back in 1826. In 1960, the Purinton organ was rebuilt and placed in the balcony.

The building was placed on the National Registry of Historic Places in 1976.

Many other occasions were instituted in the more recent years. The steeple was renovated in 1990, and the Purinton organ underwent another reconstruction in 2002. From 2002-2009 the Handoll Mission Church (Kor­ean) used the facilities for their services.

In 2010 the lower level of the building opened to accommodate the overflow of the Mid-Maine Homeless Shelter. From 2012-2014 the basement became the the shelter’s primary facility.

Some facts about the church:

When the First Baptist Society was formed in 1818, Maine was still part of Massachusetts (becoming a state two years later in 1820).

Jeremiah Chaplin was president of the Maine Literary and Theological Institution (now Colby College) when he organized his friends to convince them to organize the church.

James Monroe was president of the United States, and William King was Maine’s governor.

Goddard once reflected on a sense of what had filled the past 200 years.

“I came into the sanctuary one morning, and had a compelling feeling to sit in silence for a bit to enjoy the peace, the beauty, the tranquility of this room. Sitting in silence is not entirely true; I may have been silent, but the building was not. I do believe that this building ‘talks.’”

Local and foreign missions were a prime consideration for members of the First Baptist Church.

Rev. Jonathan Forbush started what was known as the “French Mission,” serving French Canadian immigrants. Later, Rev. Isaac LaFleur presided over morning worship in French. The French mission eventually grew to the point where they moved on to what is now the Second Baptist Church, on Water St., in Waterville.

Since 1990, the church has held weekly organ concerts during the Lenten season, featuring many local organists, including China resident Don Pauley.

In an anniversary presentation, Goddard once commented, “Only during the organ concerts held each Sunday afternoon during the Lenten season, does it [ the organ] come out of the corner and is placed in the middle of the sanctuary for all to see and hear the various area professional organists. Then, the congregation and audience can truly appreciate the art of the organist, for not only can we see the hands on the keyboard, but also the feet dancing on the foot pedals.”

The celebration will continue throughout the year with Adoniran Judson, by Rev. Foster and Mary Jane Williams, in July; Tea and Tour, in August, which is open to the community; Dean Ernest Marriner’s Little Talks on Common Things,” by David Brown, in September; Earle Shettleworth: ˆWho was Rev. Henry S. Burrage?, in October; The Mt. View Chamber Singers, in November; and December will see the Christmas Cantata, the combined choirs of Getchell Street and First Baptist churches.