Let me take you back a few decades to the 1980s. I was 12 years old and cruising around the neighborhood on my ten-speed mountain bike. On this particular day, I was exploring the garage sales along Lakeview Drive that are so prevalent this time of year.

At one of them, I found an old video game console for 75 cents and eagerly trundled it atop my bike for the trip home. It was one of those all-in-one units with the games built into it, and two controllers, then called “paddles,” with only a simple knob like a control switch for a dimmable light. 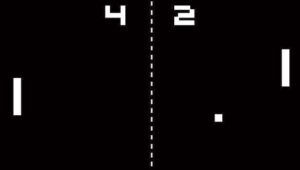 All the games included were variations on Pong, in which each player controls a short, vertical line on opposite sides of the screen, moved up or down by the control knob on the game paddle. The objective of the game is to “bounce” a little white dot from one side of the screen to the other in order to score points against your opponent.

Nobody looking at a screenshot of this game would mistake it for an actual game of tennis.

Skip forward to the present day. Steam, the largest digital distribution platform on the web, has their Summer Sale and I pick up the game Grand Theft Auto 5 for 20 bucks.

GTA5 is one of the biggest videogame releases in recent years, with over 11 million copies sold within 24-hours of its debut. Basically, it’s a crime story told in a simulated world based on the Southern California city of Los Angeles and the surrounding countryside.

Consider just a few mind-blowing facts about the world of GTA5: The game world encompasses more than 100 square miles! You can fly a plane, ride a motorcycle, or go scuba-diving off the coast of California. If you stop your car in the middle of traffic, drivers around you will beep their horns and flip you the bird until you get moving again. If you make your character act crazy in the game, passers-by will pull out their phones and film you — just like real life!

I’m only 40 (okay forty-two!), but I’ve watched as our ability to simulate real life has gone from Pong, a rudimentary effort to simulate the game of tennis, to Grand Theft Auto 5, an incredibly detailed simulation of an entire city, down to building interiors, wildlife in the countryside, and artificial intelligence-driven people that react to your actions on the fly.

Considering this kind of advancement just in my short life, what kind of worlds will we be able to simulate in another 50 years? If the past is anything to go by, computer simulations of the future will be so real that they will be indistinguishable from actual reality. Already it is difficult to watch a movie today and know which parts of it are real and which are computer generated. Combine this graphics realism with advances in computing power and artificial intelligence and it is not difficult to imagine what videogames of the future might be like.

This kind of thinking has led a number of brilliant minds, as diverse as entrepreneur Elon Musk and astrophysicist Neil deGrasse Tyson, to ask: Are we already living in a simulated world? Would we be able to tell if we were?

We can assume that, in the future, it will be possible to simulate reality to the extent that it is impossible to distinguish it from the real thing. Further, it is an obvious assumption that there will be a greater number of simulated worlds than actual worlds. One can then also assume that some of those simulated worlds would be simulations of the past, such as earth in the year 2017. And since there is only one actual Earth 2017, but many possible simulations of Earth 2017, it therefore is more likely we are living in a simulation than not. For example, if there are a billion simulated versions of Earth 2017, but only one actual Earth 2017, the odds that we are living in the real world and not a simulated one would be a billion to one against.

Consider something even weirder. In a video game-simulated world, your computer only renders the part of the virtual world you are currently experiencing. So, when you are looking in a specific direction in the game world, your computer renders the graphics for the part of the world you are seeing, but not for anything that is currently off-screen. It does this to save processing power.

Well, the “real” world eerily works in a very similar way. According to the Copenhagen interpretation of quantum mechanics, “physical systems generally do not have definite properties prior to being measured” (Wiki, 2017). In other words, quantum particles do not exist in a specific place and time until they are interacted with – something termed in physics as the “(probability) wave function collapse,” in which all possible values (of location, of momentum, etc…) collapse to a single value at the moment of interaction. It is almost as if the universe is a quantum computer which saves processing power by not calculating exact values for reality until it becomes necessary by interaction with an observer. Weird, huh?

Is it possible that we are unwitting inhabitants of an enormous simulation powered by a quantum computer existing sometime in the future?

Are your neighbors simply advanced A.I. personalities designed to give this simulation a veneer of realism? Could we all simply be self-aware A.I. placed into a simulation of earth in the year 2017 and programmed to believe this is not a simulation?

Of course, would I be able to ask these questions if we were?

Do you know someone living in their own simulation of reality? Come share your experience on townline.org or send an email to me at ericwaustin@gmail.com!