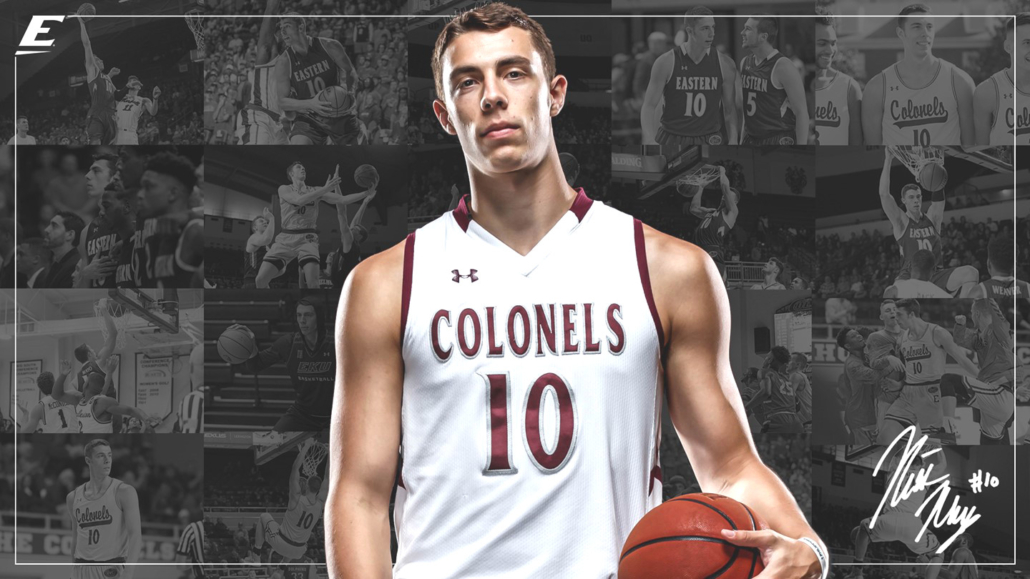 Eastern Kentucky University men’s basketball has high hopes of making it back to the Ohio Valley Conference Tournament this year, in no small part thanks to the skills of Senior forward Nick Mayo.

Earlier this season Mayo hit a career high of 40 points in a single game, with a game average of just under 17 shots.  He holds the program’s record for career blocks, has already reached No. 2 on the school’s all-time scoring list and is likely to take the top spot within the next few games.

The EKU Colonel’s new coach, A.W. Hamilton, describes him as a “once in a lifetime player” and has said on more than one occasion that he is fully confident we will see NBA beside Nick’s name in the future.

This doesn’t come as a surprise to those of us back in Mayo’s hometown. Mayo, his parents Scott and Jenn, and his sisters Kelsey and Mackenzie called Belgrade home while he was growing up. His parents and younger sister now make their home in Oakland. All three kids attended RSU #18 and played sports in the district.

“Nick was an incredible player to work with,” said MHS basketball coach Pete McLaughlin. “Coming into our program, he was a kind-hearted young freshman (only 6 feet tall at the time) who was eager to get better every day.”

Mayo grew five inches coming into his sophomore high school season, and according to Coach McLaughlin his work ethic grew with his frame. He started having an even bigger impact on the court and during his junior and senior year, college coaches from across the country started to really take notice. Mayo received interest from over 30 Division I and Division II schools, and for good reason, according to McLaughlin.

“In my 16 years of coaching, I have never been around a player that had such great vision on the court,” he said.  “If you are open…Nick is going to find you, and you better be ready to catch because you may not know the ball is coming your way. On the defensive end, Nick has incredible timing and was one of the best rebounders and shot blockers to ever play in Maine.”

Mayo’s awards and stats speak for themselves, but they aren’t all he brings to the court.  McLaughlin describes him as the glue that held the teams together during high school. The now 6-foot 9-inch forward has been named to the All-Ohio Valley Conference first team after each of his first three seasons, regularly breaks school and personal records, and still has a humble attitude. In interviews, Mayo is always quick to point out that he’s not alone on the court and always gives his teammates and coaches credit and praise.

“We as a community are lucky because he models exactly what it means to be a Messalonskee Eagle to all of our youth,” said McLaughlin. “I could not be more proud of him! I cannot wait to see what his future has in store for him!”  The sentiment is echoed by many friends, family, and community members who are staunch followers of Mayo’s career. Two years ago, a bus full of fans from Central Maine sporting “Team Mayo” shirts attended an EKU away game in Manhattan.

The home support isn’t lost on Mayo. He never forgets where he comes from and has claimed it’s a huge source of comfort and strength for him. “My family is awesome…and it’s not just my family, it’s the whole state of Maine,” he said in a recent interview. “I’m really lucky to have the support system that I have back home and I’m thankful for it.”

“We are so proud of all he has accomplished,” said his mother, Jennifer Mayo. “Nick has had a lot of people who have helped him along the way, but when it comes down to it, Nick has been the one who has put in all the work and has taken up the opportunities.  He pushes himself every day and has set high goals. We are excited to see what his future holds.”