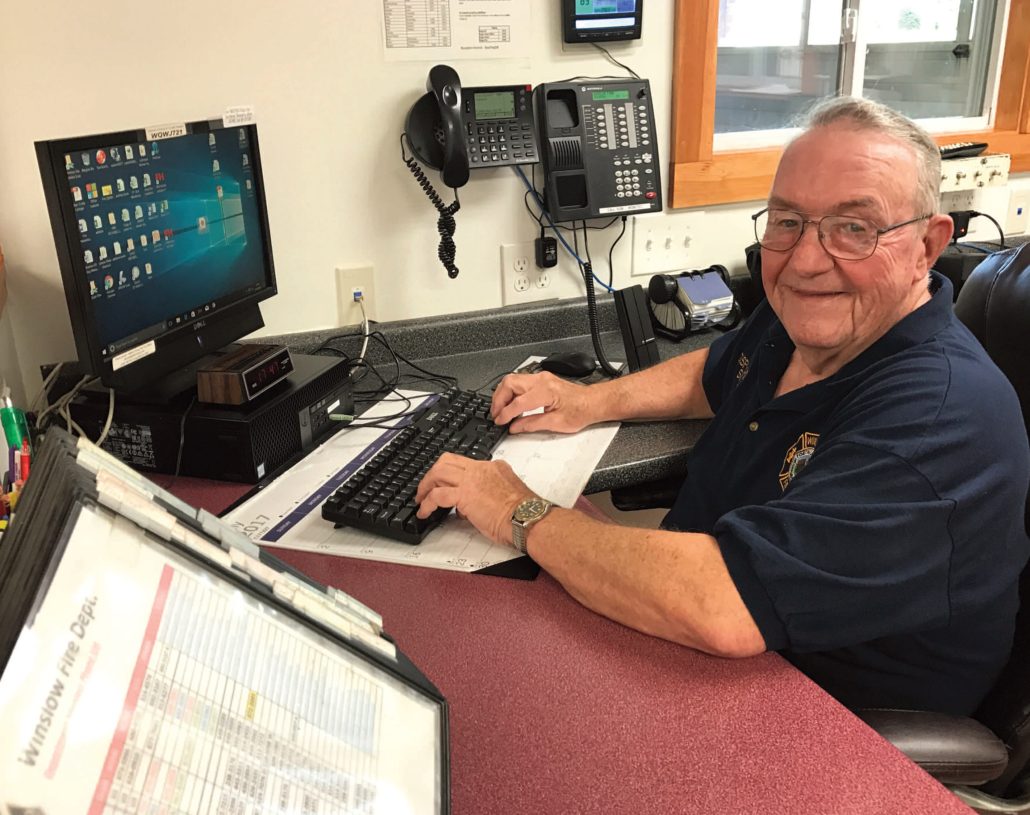 Edson ‘Skip’ Small observed 50 years with the Winslow Fire/Rescue Department in June, joining the fire department in the spring of 1967. Bill Horne was chief of the volunteer department. He has worked with four fire chiefs over the years, including Bill Horne, Ansel Grindall, Bill Page and Dave LaFountain.

“Fire equipment, gear and vehicles have changed dramatically over the years,” Small said. “We had rubber coats and plastic helmets that would melt down over your ears if you got too close to the fire.”

Laws have also changed over the years and the firefighters of today have state of the art gear that will protect them from heat, cold, chemicals and a lot of other things, according to Small.

“The fire trucks and equipment are also more technical than we had back then,” Small said. “I think my favorite truck to drive was the Buffalo. It was a combination pumper and hand ladder truck.”

The vehicle was modified and equipped with rescue gear to assist in emergency calls. Small said that he was asked to take over the dispatch position in 1991, the job that he has held since.

As with any department that has volunteers, there have been some light moments that have been remembered, according to Small. “It was a beautiful mid-fall evening when the fire bell rang and a truck was ready to be dispatched. Ed Langevin and Pete Lizotte happened to be at the station playing a game of cards when the call came in. “Fire No. 3, a fire on the Albion Road.”

Langevin and Lizotte quickly jumped into the truck and with siren blaring and the red lights on, they raced in the direction of the fire. They could see a huge orange/reddish glow in the night sky. As they proceeded, the glow got brighter and brighter. Their hearts were pumping, when all of a sudden, they came into contact with a large harvest moon cresting over the horizon! They called back on the radio simply stating it was a false alarm.

Small said that when they were fighting woods fires or grass fires they had hip boots folded down. While walking next to another fire fighter with a pump can on their backs, one would lower the hand pump and fill the boot cuff with water. When he pulled the cuff of his boots up, the water would fill his boots! You can’t make these stories up!

Since these early days, the Firefighters Association was formed in 1991, according to Small. “We have raised a lot of money to help buy equipment, help people who have been burned out of their homes, help school organizations and needy families at Christmas time.”

Small was a state licensed EMT and Paramedic until 1985 and firefighter until 1991, when he became dispather. He resides in Winslow and has been married to his wife, Joan, for 51 years. They have two children, nine grandchildren and 10 great-grandchildren. “This would not have been possible without my wife by my side,” he said.

His and hers bass WATERVILLE: New Dimensions car show raises $12,000 for cancer program
Scroll to top