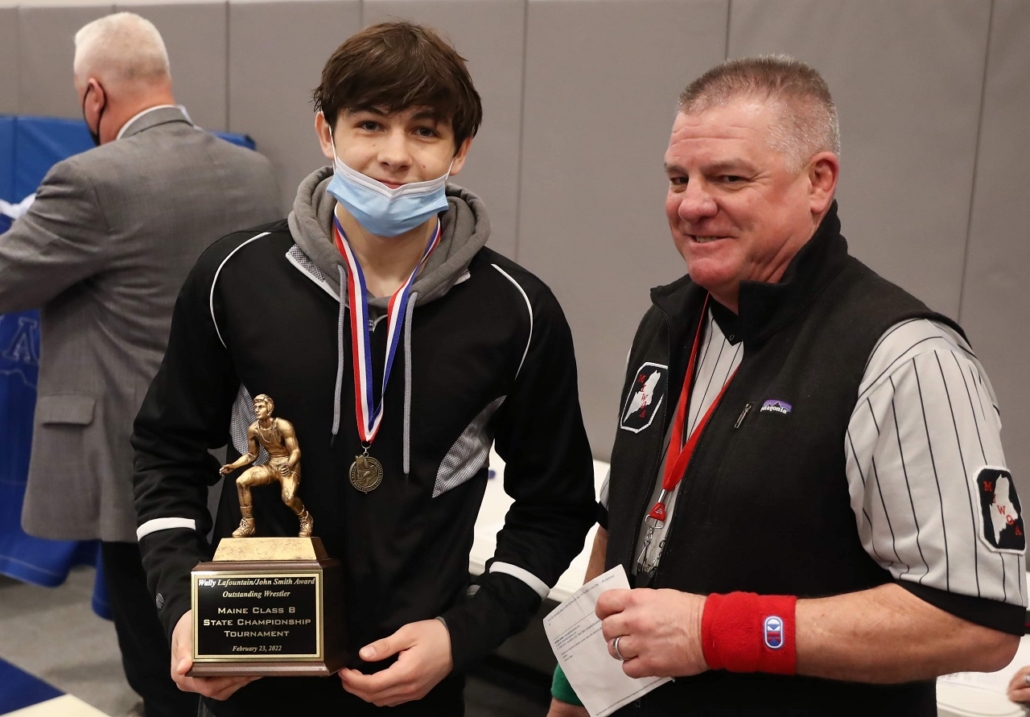 Schmitt overcame a very tough finals opponent from Wells with an impressive eight takedowns to finish at 17-10 for the win, a highlight contest that also earned him the coveted Wally LaFountain and John Smith Outstanding Wrestler Award for the State Champ­ionship meet. Sev­eral weeks prior, he won the KVAC Championship at 138 pounds and celebrated his 100th high school career win earlier this season.

Sam comes from a long line of wrestling family members with uncles, cousins and even two sisters that have all competed in the sport for Winslow. He is the fourth of the clan to win a Maine State Championship, joining his grandfather Randall Fredette (1961), cousin Ryan Fredette (2015, 2016, 2017, 2018) and cousin Alex Demers (2020) as a title holder. This is Sam’s 12th year of wrestling, having started in the Pee Wee program as a kindergartner and later winning the Maine State Pee Wee Championship as a second grader. He was no stranger to the high school state finals, having placed fourth his freshman year at 106 pounds, third his sophomore year at 120 pounds, and like many other Maine school athletes, did not have a junior season due to COVID restrictions.

In addition to excelling as a student-athlete, Schmitt is a member of the National Honor Society and was recently chosen as Winslow High School’s Student of the Month by faculty and staff. He plans to pursue a degree in business marketing, has been accepted at several colleges already. Sam is the son of Tara and Mike Fredericks, of Winslow, and Rob and Lisa Schmitt, of Waterville.