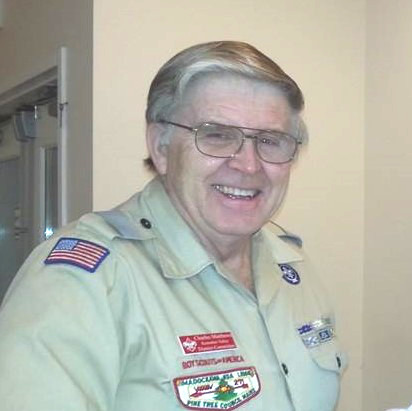 The Kennebec Valley District of Scouting honors Charlie Matthews, of Fairfield, for celebrating 55 years in the Scouting program. Charlie would have received a 55-year veteran service pin at the annual Scout Leader Recognition dinner this month but it was put on hold in response to Covid-19.

“Charlie Mathews has been a steadfast stalwart Scouter,” said Kennebec Valley District Chairman Butch Dawbin. “Whenever there was a need, Charlie stepped up and performed very well. Troop #460 always achieved high standards when they were at district events under Charlie. It was his leadership and turning over that leadership to his Scouts that made this happen. “Charlie was a youth member of Troop #470, in Fairfield, from 1953 to 1955, and then from 1967 through 2019 he served as Scoutmaster of Fairfield Troop #460.

“I have enjoyed working with young people and see them go from a new Scout who wasn’t sure of himself to become a leader with confidence in himself,” Charlie said. Matthews led the Scouts to annual visits to Camp Bomazeen or Camp Hinds and some very challenging experiences as well. “I think that some of the most favorite experiences were the camping trips. I especially enjoyed hiking 50 miles on the Appalachian Trail. I enjoyed seeing a Scout taking care of himself for six days. He carried everything he needed for the trip. Many enjoyed it and did the hikes for several years. I had one Scout tell his father that he “did it, done it and never do it again.” His family moved to Kentucky. They wrote to me when he made Eagle.”

Lyn Rowden, who is a neighbor of Matthews, has two examples of Charlie’s great work with youth. “Our two sons joined as Tigers and became Eagles under Charlie’s tutelage. They had a lot of fun at camp, on Appalachian Trail hikes and all the Scout activities. As adults in their 30s they both truly respect Charlie to this day,” Rowden said. “Countless boys have benefited from his dedication to the scouting program. It is Charlie’s knowledge and his easy-going personality that has attracted our family to Boy Scouts.”

Bruce Rueger, who has been in Scouting in Waterville for more than 40 years, admires the example Charlie Matthews presents. “Charlie Matthew is the epitome of adult scouting. He always has time to share and has an incredible amount of knowledge. Whenever Scouting is in action he can be found there in the background providing guidance and support to the Scouts who are in front providing the leadership.”

One of Charlie’s Eagle Scouts, Nathanael Batson, was quick to praise his former Scoutmaster. “He never fails to put the Scouts before himself, which shows his kind heart,” Batson said. “Charlie is like a Scouting encyclopedia who is always willing to teach others as well as assist in the trail to Eagle.” Batson earned his Eagle rank in 2015 with Matthews as his Scoutmaster.

Along with his service as Scoutmaster, Charlie has served on the Catholic Committee for Scouting, the Kennebec Valley District Scouting Committee, the Nominating Committee and various special event committees over the years. “Through the Boy Scouts and Catholic Committee on Scouting, I have met people from all parts of Maine and New England,” Charlie said. “I found them very dedicated to the program and nice people.” In 2015, Charlie was the Scoutmaster of Nathanael Batson who received his Eagle Scout rank that year. Nathanael, who is blind, overcame many obstacles to achieve his goal with the support of Charlie.

Charlie said, “The sad part of serving 55 years is that a lot of the old Scouters are gone and that many of my Scouts have passed on also. I never set out to be a lifelong Scouter. I enjoy the Scouting program and I just registered every year without giving any thought to not signing up again. Now I tell people that I am too old to quit. There are many good people involved and many young people who can benefit from the program.”

The award will be presented to Charlie at an appropriate ceremony after the current Covid-19 challenge has passed. He remains an active Scouting volunteer.