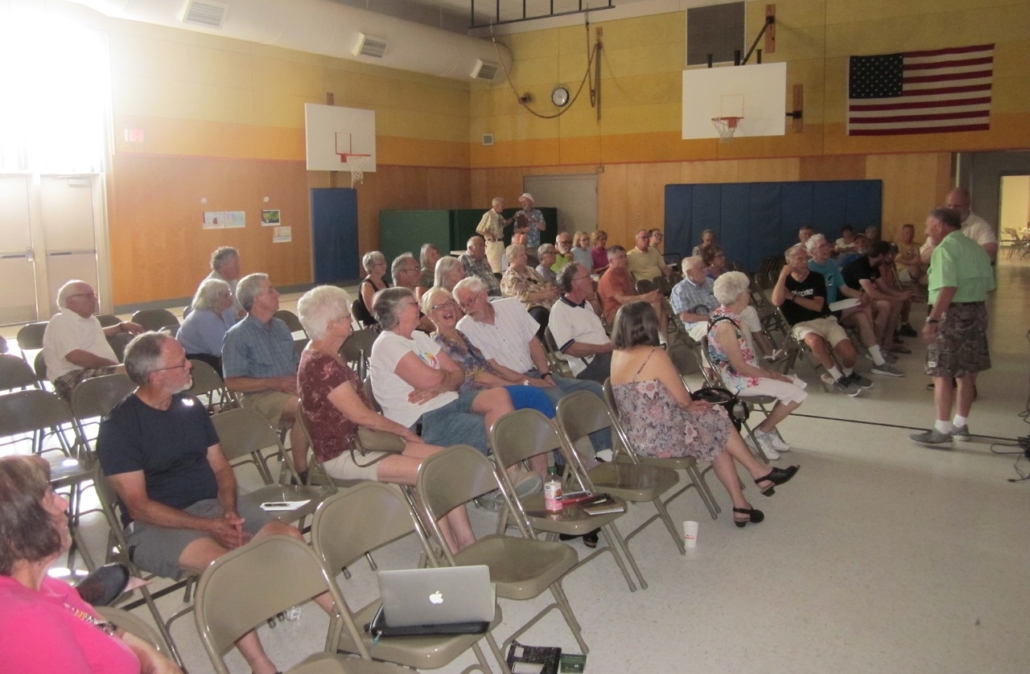 “We’re part of the problem,” Matthew Scott, the keynote speaker at this year’s China Lake Association annual meeting, told an audience of about 40 people on Saturday, July 20. “We’re also part of the solution.” 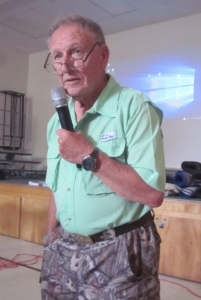 His talk was entitled, “All Maine Lakes Are Vulnerable, Some More than Others.” Matthew Scott is the founder and past president of the North American Lake Management Society, and former chairman of the Maine Board of Environmental Protection. Currently, he serves as a Director for the Maine Lakes Society. He has been studying the health of Maine’s lakes since 1959.

Prior to 1970, China Lake was a clear, blue-water lake teeming with salmon and trout. Over the next decade, however, the China area experienced a population explosion and, along with it, a period of high — and mostly unregulated — rural development. Pollution from new construction, poor septic standards and runoff from agricultural production resulted in a change in the chemical make-up of China Lake. Phosphorous levels rose and dissolved oxygen levels fell.

As a result, in 1982 China Lake experienced its first algae bloom. An algae bloom is a rapid explosion in the growth of algae as a result of high levels of nutrients in the water.

Other lakes around the state would later experience similar changes for similar reasons, but China Lake was the first, and it gave its name to the new phenomenon, which came to be called “the China Lake Syndrome.”

Beyond the unsightly appearance, high levels of algae in the lake have other consequences. As the algae dies, it sinks to the bottom and starts to decay. The bacteria that aid in the process of decomposition suck oxygen out of the water. This impacts the populations of fish living in the lake, especially those species which prefer the high oxygen content of the dark, cool depths in the deepest parts of the lake, like trout and salmon. These species, once so common, began to disappear from the lake.

Dying algae can cause another problem as well – poisonous water. “What happens is that the algae die,” says Scott, “and when they die they release an endotoxin [called microcystin].” While toxin levels in China Lake have not risen above acceptable amounts laid out by the DEP, Scott thinks we can expect to see a greater need for microcystin testing in the future.

Part of these problems are also the result of Climate Change, says Scott. “We’ve recorded temperature changes since 1895,” he says, “and [average temperatures in Maine have] increased about three degrees Fahrenheit. That’s raw data. That’s real data. It’s a scientific fact.” Scott insists, whether or not you agree that Climate Change is the result of human activity, the world is growing warmer and we need to adapt.

“Maine is getting warmer and wetter,” Scott says. His data suggests we will see an increase in future snowfall in Maine by 40 percent along the coast, 20-40 percent in central Maine, and up to 20 percent for inland Maine.

Warmer weather results in warmer water, which is ideal for algae growth, and greater snowfall means more runoff into the lake when the snow melts, which puts greater importance on constructing vegetative buffers along the lake to help filter the runoff.

Scott sees the primary drivers of lake water quality as: Landscape fragmentation from development; seepage from faulty septic tanks; agricultural runoff from the use of fertilizers and certain pesticides; pollution and runoff from roads, driveways and nonpoint sources; and, finally, Climate Change.

Although Climate Change is certainly a factor, Scott says, it is these other sources with which we should be most concerned. “We all talk about Climate Change,” he says, “and people try to hang their hat on Climate Change and what it’s doing, but we are the problem, okay? We are the ones causing the problem.”

He’s talking about population growth, but concedes that growth is inevitable. “We’re not going to see that change,” he says. “[But] we’re going to have to control people’s activities through regulations, ordinances, laws and rules.”

Scott doesn’t think there are any silver bullets when dealing with lake water quality, but there are some promising options. One popular choice is “alum treatment,” which is the process of introducing a mix of aluminum sulfate and sodium aluminate into the lake. The aluminum sulfate chemically binds with the phosphates in the water, which then settle to the bottom and are no longer available to provide nutrients for algae growth. The sodium aluminate is used to control pH levels during the treatment. This sort of treatment has shown success in other lakes, but it is expensive, and Scott emphasizes that it should not be considered until the phosphate sources feeding into the lake have first been identified and eliminated.

Another option that generated discussion is the reintroduction of alewives into the lake. Alewives are a migratory fish which feed on the phosphate-rich plankton in the lake. The fish spend most of their lives in the ocean, but return to fresh water to spawn. After spawning, when they return to the ocean, they take the phosphates they’ve consumed with them. The problem is that there are so many dams constructed along the rivers between the lake and the ocean that these migratory fish have had trouble returning to the sea after spawning. If they are unable to return to the ocean, they become trapped, eventually dying and returning those phosphates back to the lake instead.

Landis Hudson, executive director of the nonprofit Maine Rivers, spoke about the work they are doing to clear a path along Maine’s rivers for migratory fish like alewives. “Lakes are connected to rivers, rivers are connected to the ocean,” she tells the audience, “and my work with Maine Rivers is to restore connections between lakes and the ocean, and to make the habitat more accessible and healthier for native creatures, including alewives. What we’re aiming to do is restore a self-sustaining population of up to a million adult alewives that should be returning [to the lake].”

Matt Streeter, a project manager with Maine Rivers, spoke about the progress they are making. “There were six dams on Outlet Stream,” he says. “There are now four dams remaining. This year, 2019, we’re working on a fishway at Ladd Dam. Next year, 2020, we’re going to be working on a fishway at Box Mill Dam. Those are the first and second dams on the river. The next year, 2021, [we’ll be installing a fishway at] Outlet Dam. The final piece will be Morneau Dam, probably in 2022 — although we haven’t decided yet if that will be a fishway or a dam removal. We fully expect that by 2023 there will be a returning round of alewives into China Lake, with full outgoing fish passage as well.” 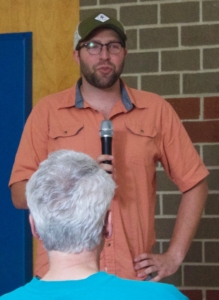 Robbie Bickford, from the Kennebec Water District, spoke about their work with China Lake. (photo by Elaine Philbrook)

Robbie Bickford, the Director of Water Quality for the Kennebec Water District, then stepped forward to speak about how KWD is working with local communities to improve water quality. (He recently took over the position, as of July 1, from Matt Zetterman, who was also present.) “The Kennebec Water District monitors transparency data, and dissolved oxygen and phosphorous levels in all three basins of China Lake,” Bickford says. “Over the last six years, there’s been a pretty good trend of transparency data getting better.” Transparency is a gauge of how clear the water is based on how far below the surface an object can be seen. “July 3 actually marked the best transparency data that we’ve seen in the west basin since 1971, at 8.3 meters (26-1/2 feet),” he reported. “The best [data] we’ve ever seen since 1971 in any basin was 8.4 meters, so that’s awesome. The average that we’ve seen in July this year is still well above the ten-year average. That’s fantastic.” Bickford noted that phosphorous levels in the lake have improved as well.

The Kennebec Water District has operated the Outlet Dam, which controls lake levels, for the last ten years. However, this year they were unable to renew their contract with Vassalboro because of a dispute over certain cost increases they were requesting. As a result, the Vassalboro Public Works Department is now operating the dam. Everyone agreed that the current lake levels are unusually high for this time of year, but Bickford and Zetterman confirmed that water levels are within the guidelines set by the Maine Department of Environmental Protection.

Scott Pierz, president of the China Lake Association, suggested the town of China could purchase the dam in order to operate it themselves, but such a move would need to be voted on at the town business meeting next year. This was confirmed by China Town Manager Dennis Heath, who was in the audience. 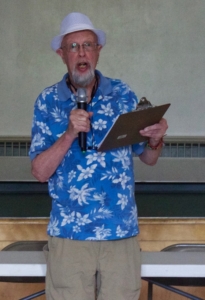 Richard Dillenbeck spoke briefly about the litter initiative he has been organizing with the China for a Lifetime Committee. “We’ve started this year an official approach to picking up litter along our highways,” he said. “We’ve gotten partial success so far. We’ve got it covered from Erskine Academy [in South China] to portions down the Neck Road [at the north end of China Lake]. We have about 30 volunteers who have stepped forward, but we need more. There are some portions that are still not covered. If you’d like to play a role, or know someone, please have them contact me.” This was greeted with raucous applause, but no volunteers. Dillenbeck can be contacted at 445-8074 or rvdillenbeck@knology.net.

Marie Michaud, coordinator for the LakeSmart program on China Lake, got up to present awards and speak about the progress they’ve made. She spoke about the importance of the program in educating lake residents on how to construct vegetative buffers to prevent phosphorous run-off into the lake. They are also beginning a LakeSmart ambassador program to help spread the word.

Finally, Bob O’Connor reported on the loon count for China Lake. This is his 30th year running the program. “We have 48 loons,” he reported. “We haven’t had that many loons since 2003. So, that’s really great. And there were four chicks!”