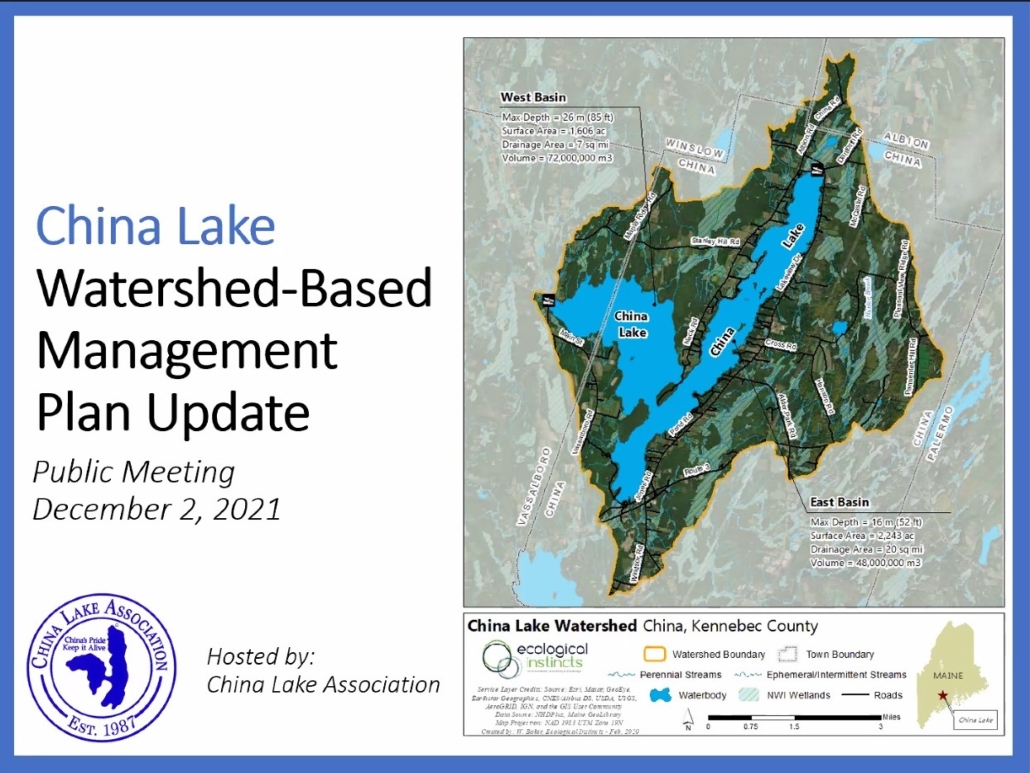 On Thursday, December 2, the China Lake Association hosted a two-hour Zoom webinar to present the public with their 10-year plan for the China Lake Watershed. The plan represented work over a two-year period by multiple organizations to survey the China Lake watershed and develop a plan for preserving and improving it. 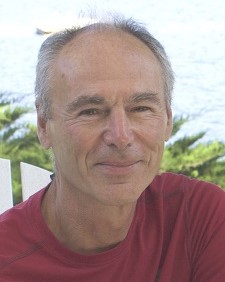 Stephen Greene, president of the China Lake Association, served as moderator for the event. Jennifer Jespersen, owner of the environmental consulting company Ecological Instincts, was the keynote speaker, with Amanda Pratt, of Maine DEP, presenting information about the recent watershed survey and moderating the question and answer session afterwards. Dr. Ken Wagner, a consultant from Water Resources Services, who Jespersen described as a “water professional specializing in the management of internal loading in lakes throughout New England”, was also on hand to answer questions from the audience.

China Lake Association president, Stephen Greene, introduced the evening by saying, “What are we trying to accomplish? In a nutshell, to restore water quality in China Lake, to end recurrent nuisance algae blooms. And why is this important? We all know that China Lake is the drinking water supply for 22,000 people. China Lake is the heartbeat of the community in the region. It is an economic engine. It serves as a large part of the tax base. It is home to people and wildlife in our community. It is a center of recreation.”

The previous watershed plan, formulated in 2008, was out of date, Jen Jespersen explained, and in order for local groups that do important restoration work in the watershed to apply and receive grants, the watershed plan must be updated every 10 years. 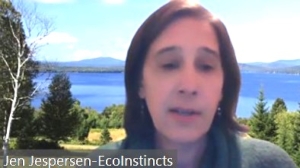 Jespersen began her presentation by explaining some of the problems China Lake is facing now and historically, along with reviewing some of the characteristics that make the China Lake watershed unique. Consisting of land in and around China Lake, both the east and west basins, 89 percent of the China Lake watershed sits within the borders of China, with nine percent in Vassalboro, two percent in Albion, and a tiny slice, making up only 0.1 percent, in Winslow. In total, the watershed includes about 27 square miles, with most of that surrounding the east basin (20 square miles). The surface area of the lake is about 6.2 square miles total.

The watershed is the area of land surrounding the bodies of water and determined by the sources that drain into the lake. Most of this area is forested (56 percent), with the remaining being wetlands (19 percent), agricultural areas (12 percent), developed land (11 percent) and roads (2 percent).

Water flows from the north end of the east basin, down the length of China Lake and then into the west basin (also known as the Big Lake), and into Outlet Stream which eventually drains into Sebasticook River and from there into the ocean. 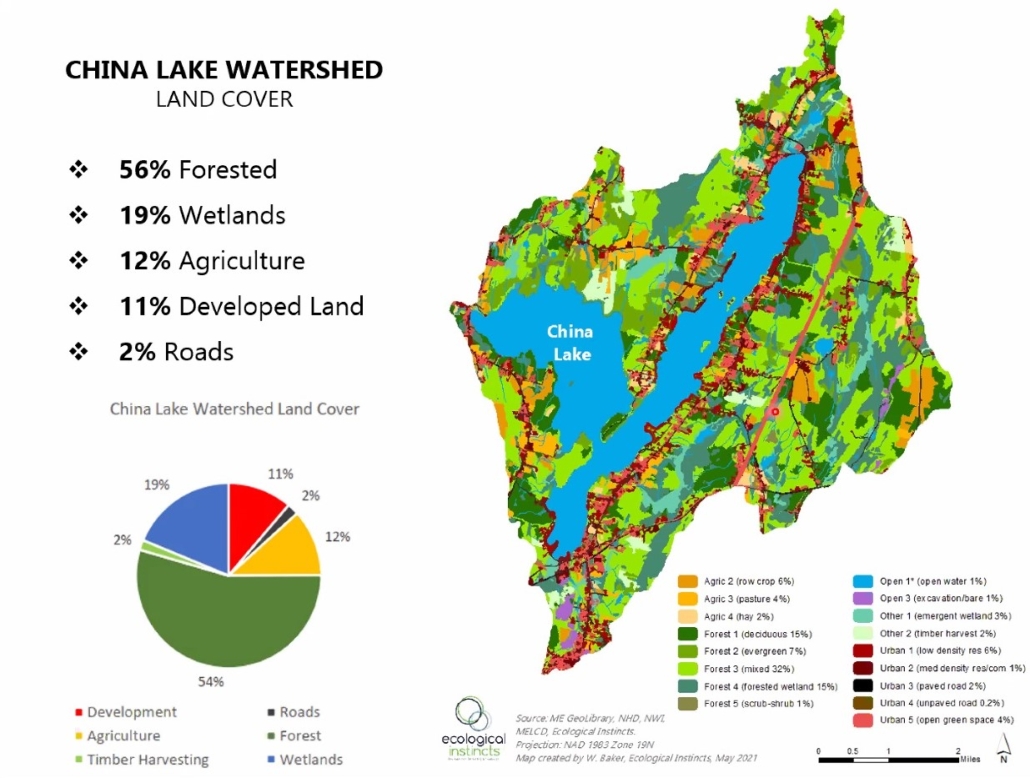 Currently, China Lake is on the state’s list of impaired lakes because of the frequency of algae blooms, because China is considered a “high contact” body of water, and because of the high level of phosphorous and low oxygen levels detected in the lake. Part of the goal of the proposed 10-year watershed plan is to address these problems.

One of the problems China Lake suffers from is a lower than average flush rate. This is the rate at which all of the water in the lake is replaced by new water. Jespersen said that while the average for lakes in the state is between 1-1.5 flushes per year, China Lake is much lower at just .65-.72 flushes per year. This means that when pollutants are washed into the lake, it takes longer for the lake to flush them downstream than other comparable lakes.

Jespersen explained that they have arrived at their recommendations through extensive data collection, including Secchi Disc testing for water clarity at multiple stations around the lake, lakebed sediment testing, the collection of water samples to test for total phosphorus and Chlorophyll-a content, and water column readings, which test for dissolved oxygen in the water and also water temperature. This data is then fed into several data models to identify the best approach for management and restoration.

Algae problems in bodies of water like China Lake are directly related to the nutrient load on the lake. This “load” comes in two varieties: external load and internal load. The external load on the lake refers to the sources of nutrients flowing into the lake from external sources, including leaky septic systems, new land development and runoff from agricultural activity like farming and animal husbandry. 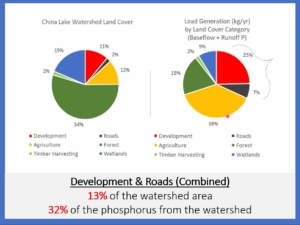 The internal load is a bit harder to explain. This is the amount of nutrients already trapped in the sediment at the bottom of the lake. Some of this internal load on the lake is natural, coming from the decomposing bodies of animals, fish and plant matter that settle to the bottom of the lake, but much of it is also due to human activity. Today, there are regulations to manage the leakage of nutrients into the lake from things like land development and septic usage. But that wasn’t always the case. In the past, septic systems leaked directly into the lake, and no effort was made to reduce the influence of land development or agricultural activity on the watershed. Over time, these nutrients drained into the lake and built up in the sediment of the lake bottom, just waiting for the right moment to feed an explosion of new algae growth. That moment came in 1983 with the first major algae bloom, and this incident spurred regulatory changes to prevent it from happening again. But by that time we were already fighting a losing game against the internal nutrient load which had been building for years.

Because of this history, the China Lake Association and its partners must focus on the problem from two fronts, the external load, or the amount of new nutrients being fed into the lake, and the internal load, which refers to the nutrients already stored in the lake as a result of years of development and mismanagement of the lake’s watershed.

Algae blooms cause multiple problems. They can threaten the safety of drinking water for those residents that source their drinking water from China Lake. Blooms also damage the recreational and aesthetic value of the lake, and can negatively impact shoreline property values. Additionally, certain types of algae can be toxic to people and pets who come into contact with them.

The team’s research has suggested that the greatest impact on the west basin (the Big Lake) comes from sources in the east basin, and so dealing with the east basin’s internal load will result in the most improvement across both bodies of water. They have also identified the largest contributors of nutrients into the lake as a way to help formulate a management plan. For example, land used for agriculture makes up only 12 percent of the area of the watershed, but it contributes 38 percent of the nutrients feeding into the lake. 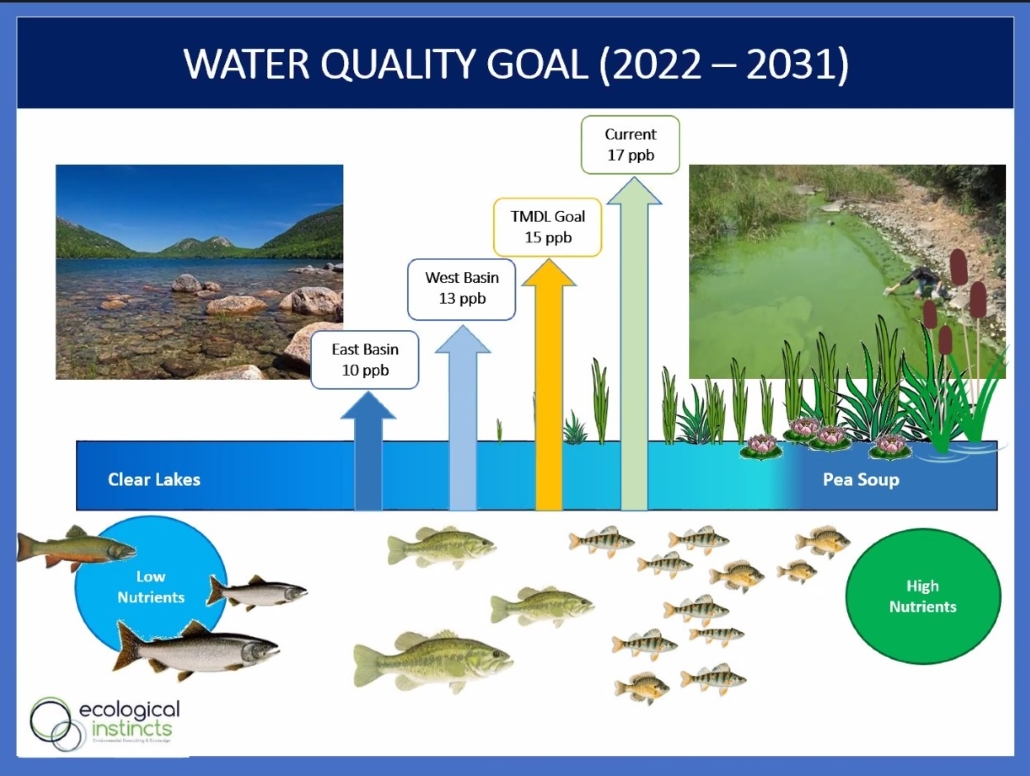 Most of the questions asked by audience members after the presentations centered on the proposed alum treatment to address the lake’s internal nutrient load. This treatment involves adding aluminum sulfate to the lake which prevents the phosphorus in the sediment from being released as nutrients for potential algae blooms. Jespersen says that such a treatment could reduce the phosphorus in the east basin by as much as 90 percent, with an estimated cost of $1,445,000. She emphasizes that more analysis of lake sediment needs to be done to determine correct dosage for the alum treatment, which will also influence total expenses.

Ken Wagner, a consultant with Water Resources Services, addressed concerns about the treatment. While nothing is without risk, he said that aluminum is the second most common metal contained in the earth’s crust (after iron), and is commonly used as a treatment for drinking water. In fact, the companies that provide lake treatments are primarily involved in the treatment of drinking water.

Robbie Bickford, an employee with the Kennebec Water District, jumped on the call to confirm that aluminum is used as part of the KWD water treatment process.

Other proposals, such as oxidizing the lake to raise the dissolved oxygen level, or dredging the lake bottom to remove nutrient-rich sediment, were suggested by audience members. Dr. Wagner said that while such ideas have merit to achieve greater water clarity, both suggestions were discarded because of the enormous costs involved when compared to the expected improvements. An alum treatment is more cost effective, safe, and expected to provide benefits for 20-30 years into the future.

A question was asked about how the recent return of alewives to China Lake might impact water clarity. Dr. Wagner said he doesn’t think there will be a substantial impact either way.